When I checked over the schedule for this summer's American Bach Soloists Festival & Academy, one offering that stood out even among the promised abundance was the outside-of-Europe premiere of Sémélé, one of the operas by Marin Marais, a master of the viola da gamba who is better known for his chamber works. I must not have been the only one eager to hear this piece, since ABS had to add an additional performance. That is the performance I attended, on Thursday night. I hope someone who can do something about it is paying attention to this pent-up demand for French baroque opera. 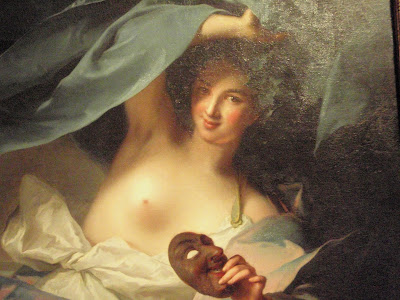 As is often the case in these works, there was a lengthy (roughly thirty minute) prologue. This one involved an inaugural ceremony in honor of the new god, Bacchus – the first bacchanal. Love and wine are invoked. Apollo shows up to approve the proceedings in honor of his half-brother's ascension to the pantheon: a nice example of the Apollonian and the Dionysian joining together. The sun god then calls on the muses to tell everyone how Bacchus came about: in the manner of our comic-book movies, it's the origin story! And that makes up the rest of the opera, though at the end the libretto doesn't actually make it clear that Semele was pregnant when jealous Juno tricked her into making Jupiter reveal himself in his glory, thereby burning the mortal to a cinder and requiring Jupiter to rescue the infant god. Presumably the audience knew the story and could put the pieces together afterward, much as Jupiter did. There are other complications of a romantic nature, typical of dramatic works of this period.

Marais proved a master of evening-length theatricals as well as briefer instrumentals: there was a delightful variety in the score, which was crammed with dances and spectacular effects such as an invocation of the Underworld (a particularly powerful moment for the men of the splendid chorus) and a striking earthquake as Jupiter approaches in his destructive glory. 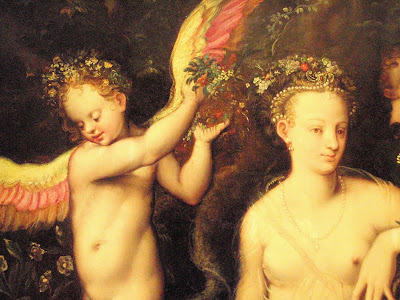 The performance was done concert-style, with the singers in evening dress and holding scores, and although one of the ways in which Sémélé resembles other baroque operas is the reliance on spectacle and stage magic, this delightful performance was all so fresh and lively you could feel the flowing waters and see the green forest vistas summoned by the vividly pictorial music. (Though I would still love to see a staging, maybe by someone like Mark Morris who could take advantage of the many dance/movement interludes.)

It's all quite sumptuous and extravagant, and was magnificently performed by the chorus, the orchestra, and the very strong line-up of vocalists: Grace Srinivasan (soprano), who on Thursday substituted for the indisposed Julianna Emanski as the Grand Priestess of Bacchus in the Prologue as well as singing her regularly scheduled role as Second Shepherdess; Ben Kazez (baritone) as the Grand Priest of Bacchus; Matthew Hill (tenor) as Apollon; Corbin Phillips (baritone) as Cadmus; Rebecca Myers Hoke (soprano) as Sémélé; Chelsea Morris (soprano) as Dorine, her maid; Steven Brennfleck (tenor) as Adraste, the warrior who thinks he's going to marry Sémélé until he realizes his rival is Jupiter; David Rugger (baritone) as Mercure (occasionally disguised as Arbate, in love with Dorine); Christopher Besch (bass) as Jupiter (occasionally disguised as Idas, mortal lover of Sémélé); Sara LeMesh (mezzo-soprano) as Junon; Ryan Strand (tenor) as the Shepherd; and Hannah De Priest (soprano) as First Shepherdess. 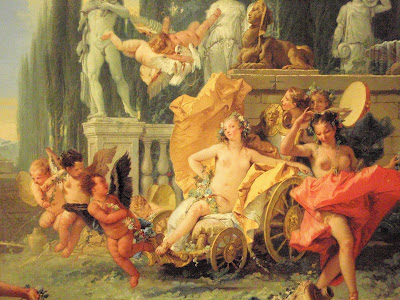 After the intermission there was noticeable attrition in the audience, which was unfortunate but inevitable when your week-night concert doesn't even start until 8:00 PM and lasts a bit over three hours. I wish ABS would join the growing number of organizations with more realistic start times. It was well after 11:00 PM when I arrived at the Civic Center BART station, only to find I had just missed a train and had to wait almost twenty minutes for the next one. That station has really gone downhill over the past year or two. There were people openly smoking drugs down on  the platform, without a single BART officer in sight, and that is not the first time I've seen that down there. A successful concert brings with it a letdown as we re-enter the world, and this was more jarring than most, though perhaps it's rather the case that a reminder of the swelling ranks of human misery in our midst brought me closer in spirit to the descending years of the French monarchy. 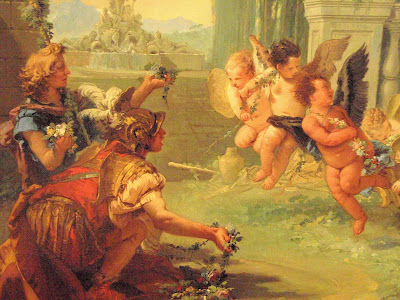 (The photos are details of paintings at the Legion of Honor: the first is Thalia, Muse of Comedy by Jean-Marc Nattier; the second is Venus and Cupid by the School of Fontainebleau; the third and fourth are from Giovanni Battista Tiepolo's The Empire of Flora.)
Posted by Patrick J. Vaz at 2:33 PM

I'm sorry to have missed this one.

That's the most cogent possible explication for the opera's prologue, but I still don't think it connects well to the of the opera. It's justified as a way to cram even more dances & choruses into the thing!

Yes, I think you're right, both about the tenuous connection and the reason for the prologue. I suspect another important reason is that it allowed them to work in an appearance by Apollo, who would otherwise be absent from the story, and Apollo the Sun God in these operas is usually a flattering reference to Louis XIV the Sun King. I believe he used to dance dressed as Apollo. More rulers should do that.