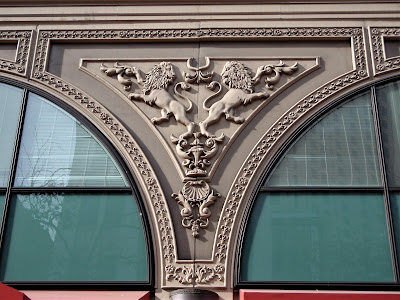 (I don't know what this building used to be, but currently it's a Walgreen's)
Posted by Patrick J. Vaz at 5:00 AM No comments:

It's the end of another calendar year, but the mid-point for the performing arts calendar, though as usual in December most of the interesting items are jammed into the first week or ten days and then we're off to Sugarplum land. As usual I have omitted many of the more familiar holiday productions, on the grounds that if going to Nutcracker or Christmas Carol is your unalterable tradition then you already know when and where it's happening. As ever, thanks and gratitude to anyone who visits here and health, peace, and happiness in the new year.

Theatrical
42nd Street Moon revives Scrooge in Love, the story of what happens after the famous visitation from three ghosts, from 4 to 22 December at the Gateway Theater. The show is directed by Dyan McBride, with music by Larry Grossman, lyrics by Kellen Blair, and book by Duane Poole.

For a non-traditional take on the beloved tale, go to Theatre of Yugen's revival of A Noh Christmas Carol, directed by Nick Ishimaru, running from 6 to 29 December.

New Conservatory Theater revives Head Over Heels, the musical based on Sir Philip Sidney's The Countess of Pembroke's Arcadia with songs by the Go-Go's, directed by Ed Decker, from 6 December to 12 January 2020.

Shotgun Players continues its season of something offbeat for the holidays with Caryl Churchill's Vinegar Tom, directed by Ariel Craft with original music by Diana Lawrence, from 6 December to 5 January 2020.

Berkeley Rep has the world premiere of Sarah Ruhl's Becky Nurse of Salem, directed by Anne Kauffman, from 12 December to 26 January 2020.

The African-American Shakespeare Company revives its popular holiday show, Cinderella, directed by Sherri Young; you can catch it at Herbst Theater from 20 to 22 December.

Operatic
The Future Is Now, the annual finale for the latest SF Opera Adler Fellows, will take place on 6 December.

Broadway star Sutton Foster will help you get through New Year's Eve in a special concert at the Geary Theater, presented by Feinstein's at the Nikko.

Choral
Sacred & Profane offers Winterlude: Songs of Sleep and Repose, with pieces ranging from the English Renaissance to contemporary composers like Lera Auerbach and Jack Curtis Dubowsky, on 7 December at St Mark's Episcopal in Berkeley and 8 December at St Mark's Lutheran in San Francisco.

Chanticleer offers its annual and beloved Christmas concerts at a wide variety of venues throughout the Bay Area from 10 to 23 December.

Old First Concerts ramps up the holiday choral offerings this month: Women's vocal collective Musae visits on 6 December to wander through The Bleak Midwinter, a program featuring contemporary works by Eric Barnum and Carson Cooman along with traditional carols; the Young Women's Chorus of San Francisco sings carols by candlelight on 15 December, in a program that includes works by Hildegard von Bingen, Arvo Pärt, Maurice Duruflé, and others; and Kitka sings Wintersongs on 22 December.

Ragazzi Boys Chorus presents Stories of Our Immigrant Heritage (with a holiday-season slant) at Old First Concerts on 8 December.

On 16 December at Davies Hall, Valérie Sainte-Agathe leads the San Francisco Girls Chorus, with Bridget Kibbey on harp, Clerestory, and The Living Earth Show  in A Ceremony of Carols, a seasonal celebration that includes not only the eponymous Britten work but also songs and settings by Thomas Adès, Ysaÿe Maria Barnwell, Ēriks Ešenvalds, Esa-Pekka Salonen, and Robert Johnson, as well as traditional carols.

Nicholas McGegan leads the forces of Philharmonia Baroque in Handel's Judas Maccabeus, with tenor Nicholas Phan, and you can hear the results on 5 December at Herbst Theater in San Francisco, on 6 December at First United Methodist in Palo Alto, and 7 - 8 December at First Congregational in Berkeley.

Bob Geary leads the San Francisco Choral Society in an all-Bach concert, featuring the Magnificat and the second half of the Christmas Oratorio, on 6 December at St Ignatius in San Francisco.

The San Francisco Early Music Society brings the Academy of Ancient Music to First Congregational in Berkeley on 13 December, to play pieces by Clarke, Handel, Corelli, Tonelli, Handel and Purcell.

Hank Dutt, violist of the Kronos Quartet, makes a solo appearance at Old First Concerts on 14 December in a contemporary program including works by Philip Glass, Meredith Monk, Leonid Desyatnikov, Toru Takemitsu, Aleksandra Vrebalov, Hanna Kulenty, and the west coast premiere of John Harbison's Sonata for Viola and Piano (with pianist Hadley McCarroll, and we are told Harbison will be in attendance).

Organist Jonathan Dimmock gives his annual performance of Messiaen's La Nativité du Seigneur at the Cathedral of Christ the Light in Oakland on 17 December; admission is free but donations are accepted.

The Center for New Music as usual has a calendar full of interesting things; some items that catch my eye in the current month are: Mark Helias and Ben Goldberg offering an evening of "schemes, diatribes, unholy postmortems, and fractured analysis" for bass and clarinet on 5 December; the world premiere of Larry Polansky's five songs for kate and vanessa along with works by Henry Cowell, Mark Applebaum, Salina Fisher, and Terry Longshore on 11 December; Global Arts Bridges: Inception Part II on 14 December; acoustic guitarist Charlie Rauh on 15 December; and The Unquiet Grave (Randall Krieger, guitar and vocals; Elise Ebbinghaus vocals/bodhrán) along with Roberto Granados (guitar and ukulele) on 20 December.

Orchestral
On 13 December Joseph Young leads the San Francisco Conservatory of Music Orchestra in the Tchaikovsky 1, Julia Perry's A Short Piece for Small Orchestra, and Visions of a Flaxen Sea by Nicholas Denton-Protsack, 2019 winner of SFCM's Highsmith Competition.

Chamber Music
The San Francisco Symphony offers two chamber music concerts this month; weirdly, and this is not the first time this has happened, they are on the same day at the same time, though in different locations so there goes your Charles-Ivesian mash-up. At the Gunn Theater in the Legion of Honor you can hear Debussy, Poulenc, and Fauré, and in the vast reaches of Davies Hall you can hear Ravel, Bottesini, Loeffler, and Muczynski.

San Francisco Performances presents the Brentano Quartet at Herbst Theater on 4 December, when they will play works by Mozart, Respighi, and the Schoenberg String Quartet 2 with soprano soloist Dawn Upshaw.

Cal Performances presents cellist Sheku Kanneh-Mason and pianist Isata Kanneh-Mason (brother and sister) in a program of Beethoven, Lutosławski , Barber, and Rachmaninoff in the unfortunate venue of cavernous Zellerbach Hall on 4 December.

On December 15 in Hertz Hall Jonathan Biss continues his season-long, seven-concert traversal for Cal Performances of the complete piano sonatas of Beethoven.

Cinematic
7 December is this year's Day of Silents for the San Francisco Silent Film Festival; once again the Castro Theater will host a wide-ranging display of early cinema (all with live musical accompaniment), from shorts by Alice Guy-Blaché to grand romantic spectacles like Phantom of the Opera (though if I could only see one of these films, I'd go for Lubitsch's witty The Marriage Circle).

The Berkeley Art Museum / Pacific Film Archive starts the series Agnès Varda: An Irresistible Force on 20 December with her final film, Varda by Agnès; the series runs until 28 February 2020.

On 28 December the Berkeley Art Museum / Pacific Film Archive presents The Adventures of Prince Achmed, Lotte Reiniger's enchanting silhouette film fantasia from 1926 on some tales from The Arabian Nights, with Judith Rosenberg accompanying on piano; I believe it is currently considered the world's earliest, or at least earliest surviving, feature-length animated film. If you've never seen it, or even if you have, give yourself a year-end treat.
Posted by Patrick J. Vaz at 6:30 PM No comments: 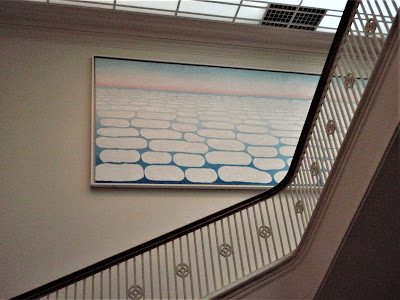 Georgia O'Keeffe's Sky Above Clouds IV in the Art Institute of Chicago
Posted by Patrick J. Vaz at 5:00 AM No comments: 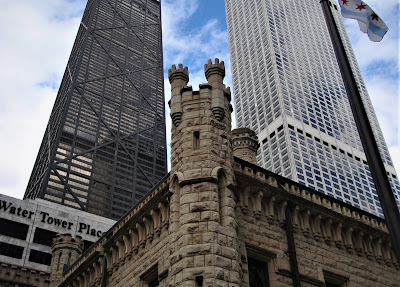 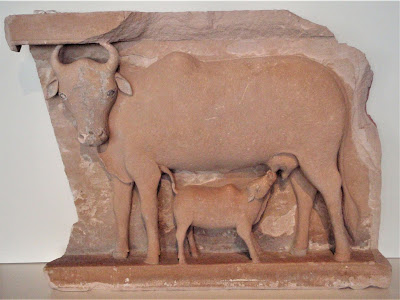 Cow Suckling a Calf, from Madhya or Uttar Pradesh in India, now in the Art Institute of Chicago – occasionally I'm really struck by the age of an object in a museum, as I was this time when I read on the label that this sandstone sculpture is dated to "about" the 9th century
Posted by Patrick J. Vaz at 5:00 AM No comments: 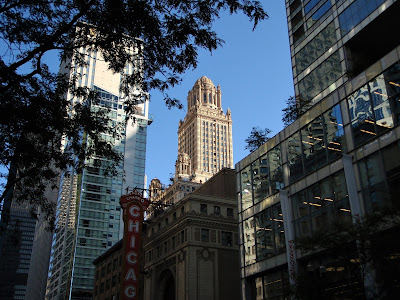 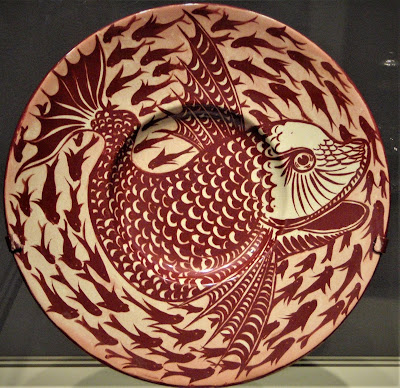 a tin-glazed earthenware dish from about 1880, designed by William Frend De Morgan and made by William De Morgan pottery in Chelsea, London: at the Art Institute of Chicago
Posted by Patrick J. Vaz at 5:00 AM No comments: 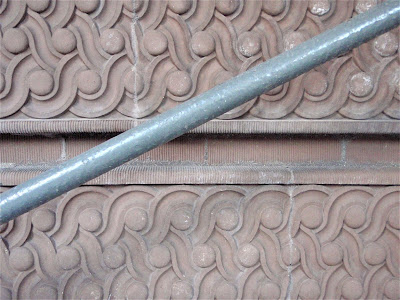 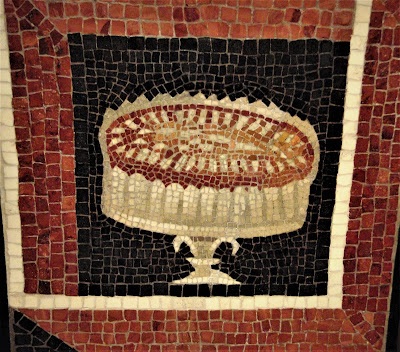 Roman mosaic floor panel depicting an almond cake; 2nd century CE: at the Art Institute of Chicago
Posted by Patrick J. Vaz at 5:00 AM No comments: 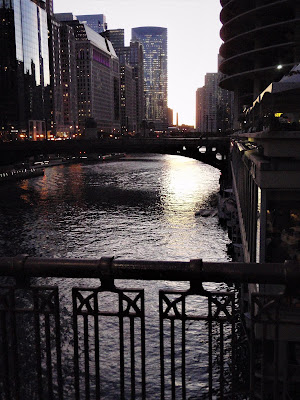