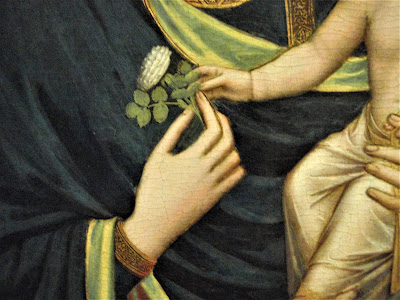 detail of Madonna and Child by Giotto in the National Gallery of Art, Washington DC
Posted by Patrick J. Vaz at 5:00 AM No comments:

Here we are, at the start of a new year but roughly half-way through the performance season (though of course it's pretty much year-round by now). Anyone interested in classical music, and I assume that would include anyone who reads these previews, is aware that 2020 marks the 250th anniversary of Beethoven's birth, and though it hasn't exactly been difficult to find performances of his music, the scheduling is really ramping up for the anniversary year, to such an extent that I created a new Beethoven category, featuring concerts that are either all-Ludwig or feature his works as the main attraction. Personally I'm always happy to hear his ever-revolutionary work, but it's also good to remember that one of the best ways to honor such an artist is to be open to the new forms of beauty being created in our own day by those following his heaven-searching path. Happy new year to all!

Theatrical
On 12 January, in conjunction with the exhibit Strange, running at the Berkeley Art Museum / Pacific Film Archive until 19 January, the Actors Ensemble of Berkeley presents Guillaume Apollinaire's The Mammaries of Tiresias (opera-goers will recognize the title from Poulenc's setting of the play).

ACT presents Will Eno's Wakey, Wakey, directed by Anne Kauffman and starring Tony Hale, from 23 January to 16 February at the Geary Theater.

Cutting Ball Theater presents Ways to Leave a Body, a theatrical collaboration written by Alexa Derman and Roxie Perkins and directed by Maya Herbsman and Allie Moss, from 23 January to 9 February.

Tiny Beautiful Things, directed by Bill English and based on the book by Cheryl Strayed and adapted for the stage by Nia Vardalos, comes to San Francisco Playhouse 28 January through 7 March.

Aurora Theater has the west coast premiere of Lucy Kirkwood's The Children, directed by Barbara Damashek, from 31 January through 1 March.

Operatic
Nicholas McGegan leads Philharmonia Baroque in Christopher Alden's production of Handel's Aci, Galatea e Polifemo with soloists Lauren Snouffer (soprano, as Aci), Anthony Roth Costanzo (countertenor, as Galatea), and Davóne Tines (bass-baritone, as Polifemo), and that's at the ODC Theater from 24 - 26 and 28 - 31 January and 1 February; there's is also an opening night "gala" on 22 January at the Wilsey Center for Opera.

West Edge Opera and Earplay present this year's edition of Snapshot, their sampler series of operas currently being composed, on 31 January at the Ed Roberts Campus in Berkeley (right by the Ashby BART station) and 1 February at the Taube Atrium Theater in San Francisco, where you can hear scenes from Gilberto (music by Nicolas Lell Benavides, libretto by Marella Marin Koch), Eighteen Melodies for Hujia (music and text translation by Joan Huang), El Canguro (music by Peter Michael von der Nahmer, libretto by Cynthia Lewis Ferrell), and Moon, Bride, Dogs (music by Ryan Suleiman, libretto by Cristina Fries).

Vocalists
Some celebrated singers are coming to the San Francisco Conservatory of Music: soprano Deborah Voigt gives a master class on 10 January; soprano Patricia Racette gives one on 17 January; and mezzo-soprano Susanne Mentzer gives a recital on 20 January (program not yet announced) as part of the Faculty Artist Series. All these programs are free but reservations are recommended.

Cal Performances presents the Royal Philharmonic Orchestra, conducted by Pinchas Zukerman, in Zellerbach Hall on 26 January, when they will perform Beethoven's Overture to Egmont, the Tchaikovsky 5, and Mozart's Violin Concerto 5, the Turkish (with Zukerman doubling as soloist).

Conductor Laureate Herbert Blomstedt returns to the San Francisco Symphony on 30 - 31 January and 2 February to lead the Brahms 3 and the Berwald 1.

Presented by San Francisco Performances, the Alexander String Quartet, along with "host-lecturer" Robert Greenberg, continues their Saturday-morning traversal of the Beethoven string quartets on 25 January with No. 7 in F Major, Op. 59, No. 1 and No. 8 in E minor, Op. 59, No. 2.

Violinist and conductor Daniel Hope leads the New Century Chamber Orchestra, with guest artists pianist Simone Dinnerstein and cellist Lynn Harrell, in two all-Beethoven programs: on 24 January you can hear the Cello Sonata No. 5 in D Major, Op. 102 No.2, the Violin Sonata No. 9 in A Major, Op. 47 (the Kreutzer), and the Piano Trio in E-flat Major, Op. 1 No. 1; and on 25 January the Triple Concerto and the First Symphony (both those programs are at the Presidio Theater in San Francisco; the 25 January program can also be heard on 23 January at First Congregational in Berkeley).

The Ives Collective plays Beethoven's String Quintet in C major and a chamber ensemble arrangement of the Piano Concerto 4 for Old First Concerts on 26 January.

The San Francisco Symphony presents violinist Anne-Sophie Mutter and pianist Lambert Orkis playing Violin Sonatas 4, 5 (Spring), and 9 (Kreutzer) in Davies Hall on 26 January. Then on 27 January, again in Davies Hall, the Symphony will present Mutter along with violinist Ye-Eun Choi, violist Vladimir Babeshko, and cellist Daniel Müller-Schott playing the String Trio in C minor, Opus 9, no.3; the String Quartet in E-flat major, Opus 74 (the Harp), and the String Trio in E-flat major, Opus 3.

Alexander Lingas leads Cappella Romana in the music of "ninth-century nun, poet, and hymnographer Kassianë", further described on their website as "Byzantium’s most formidable and prolific female composer" – sounds intriguing! You can experience her music on 18 January at St Ignatius in San Francisco.

The San Francisco Early Music Society gives us An Austen Afternoon with soprano Rita Lilly, narrator Nick Jones, and fortepianist Derek Tam performing excerpts from Austen's novels and pieces she and her family might have played or sung, and that's 19 January at Rendon Hall at the California Jazz Conservatory on Addison Street in Berkeley.

Countertenor Aryeh Nussbaum Cohen joins Jeffrey Thomas and the American Bach Soloists in Orphean Enchantments, a concert featuring Vivaldi's Stabat Mater as well as works by Bach, JC Bach, Hoffmann, Buxtehude, and Muffat; you can hear them 24 January at St Stephen's in Belvedere, 25 January at First Congregational in Berkeley, 26 January at St Mark's Lutheran in San Francisco, and 27 January at Davis Community Church in Davis.

Modern / Contemporary Music
The San Francisco Contemporary Music Players celebrate the Merce Cunningham centennial as well as his long partnership with John Cage with Cage's Concert for Piano and Orchestra, to which Antoine Hunter, founder of the Bay Area International Deaf Dance Festival, will perform the original choreography; the program will also include works by Gloria Justen, David Coll, Henry Cowell, and Anna Clyne, and you can experience it all 17 January at the San Francisco Conservatory of Music.

Other Minds presents The Nature of Music, featuring layered recordings of natural sounds by OM Executive and Artistic Director Charles Amirkhanian, on 19 January at the Goldman Theater in the David Brower Center in Berkeley.

The Friction Quartet will be at the San Francisco Conservatory of Music on 30 January for their latest concert of commissioned premieres; this one will feature Nicole Lizée's Juxtapossession and Mario Godoy's Attention Economy, along with a new string quartet arrangement of Lizée's Criterion Collection (yes, that is a reference to the celebrated film purveyors) and Lake by Eric Deluca.

Here are some things on the Center for New Music's January calendar that jump out at me: the Nomad Trio and Amendola & Greenlief Duo on 7 January; Feedback: In Response with composer Brett Austin Eastman and flutist Jessie Nucho on 18 January; D Riley Nicholson's Resurrection of Everyday People concert & album release on 19 January; the Quince Ensemble in a Woody Guthrie-inspired concert on 24 January; and Ensemble for These Times with Blooming Flowers: Music by Women Composers, featuring the world premiere of Weiwei Miao's Blooming Flowers, Full Moon, on 25 January.

Beethoven isn't the only one with a birthday this year, and Freight & Salvage in Berkeley is here to remind you of that important fact: on 13 January Ben Simon and the San Francisco Chamber Orchestra celebrate Mozart's birthday (actual birthday: 27 January) with two of his quintets (Horn and Viola) and from 24 through 26 January F&S hosts the Django Reinhardt Birthday Festival (actual birthday 23 January) and you can get a pass for all three days or individual tickets for Friday, Saturday, or Sunday.

On 15 January San Francisco Performances revives its Salon Series, now at the Education Studio at the War Memorial Veterans Building, with pianist Edward Simon in an all-Mompou program.

Pianist Anyssa Neumann explores contrapuntal traditions from the baroque to the present day, including preludes and transcriptions by Bach, Busoni, Pärt, Chopin, Dallapiccola, and Liszt, for Old First Concerts on 31 January.

Dance
San Francisco Ballet opens its season with Cinderella, with music by Prokofiev, choreography by Christopher Wheeldon, and puppetry from Basil Twist, from 21 January to 2 February.

Visual Arts
The Berkeley Art Museum / Pacific Film Archive opens Brave Warriors and Fantastic Tales: The World According to Yoshitoshi on 15 January; the show runs until 31 May.

The small sculptures of Ron Nagle are featured in Ron Nagle: Handsome Drifter, running at the Berkeley Art Museum / Pacific Film Archive from 15 January to 14 June.

Awaken: A Tibetan Buddhist Journey Toward Enlightenment, including works from the Virginia Museum of Fine Arts as well as the Asian Art Museum's own collection, opens at the Asian on 17 January; I'm looking forward to the show, but even if you aren't, I urge you to read the promo on the website, which is, quite frankly, utterly bizarre, promising as it does not just that you will see interesting and beautiful things or learn something new about the world but that you will receive a life-altering spiritual uplift. I think this speaks to the role of Asian religions, particularly Buddhism, and most particularly Himalayan Buddhism, in the American cultural imagination; I mean, I can't imagine a museum presenting a show of, say, altarpieces from Renaissance Florence and promising us that we will leave the show filled with a new-found and permanent sense of the peace that comes from understanding Christ's redemptive love. (If I end up emerging from this exhibit with the advertised spiritual awakening, I promise to update everyone.)

Cinematic
The Berkeley Art Museum / Pacific Film Archive offers some Limited Engagements & Special Screenings, and it's a bit of a grab-bag but none the worse for that; every one of these films is worth seeing.

Next Door to Darkness: The Films of David Lynch runs at the Berkeley Art Museum / Pacific Film Archive from 10 January to 29 February.

Just as 2018 was the Ingmar Bergman centennial, 2020 will mark a century since Fellini's birth, and the Berkeley Art Museum / Pacific Film Archive will mark the occasion in the best way possible, by showing his movies; the series starts on 16 January.
Posted by Patrick J. Vaz at 7:01 PM No comments: 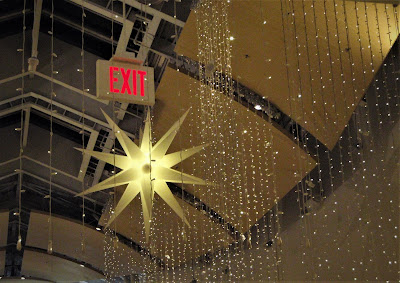 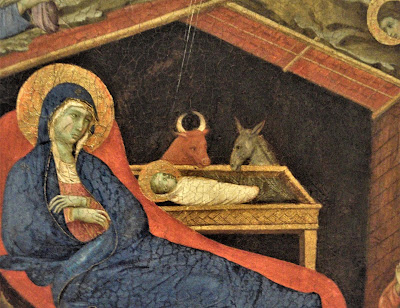 detail of The Nativity with the Prophets Isaiah and Ezekiel by Duccio di Buoninsegna in the National Gallery of Art, Washington DC
Posted by Patrick J. Vaz at 5:00 AM No comments: 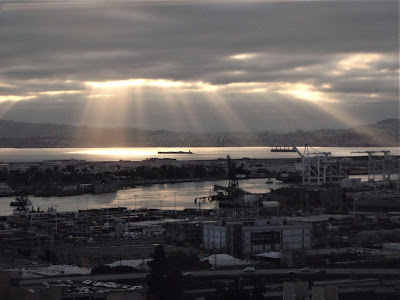 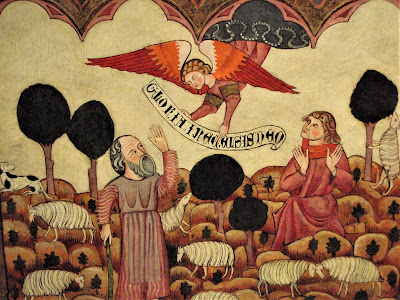 the annunciation to the shepherds, a detail from the anonymous Retable and Frontal of the Life of Christ and the Virgin Made for Pedro López de Ayala, painted in Spain in 1396, now in the Art Institute of Chicago
Posted by Patrick J. Vaz at 5:00 AM No comments: 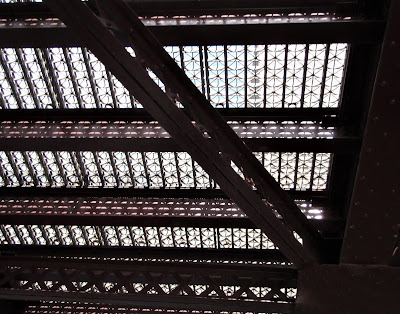 the underside of a bridge on the Chicago River, October 2019
Posted by Patrick J. Vaz at 5:00 AM No comments: 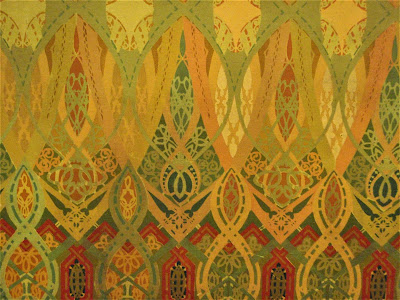 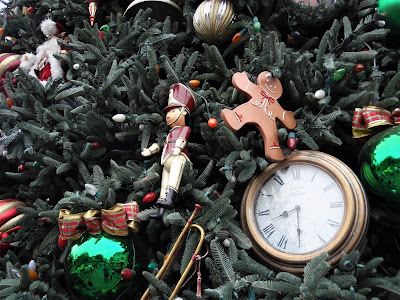 the Christmas tree on Main Street, Disneyland, November 2017
Posted by Patrick J. Vaz at 5:00 AM No comments: 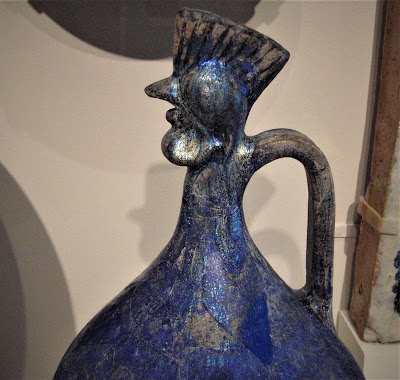 detail of a rooster-headed ewer from 13th century Iran, now in the Legion of Honor
Posted by Patrick J. Vaz at 5:00 AM 1 comment: