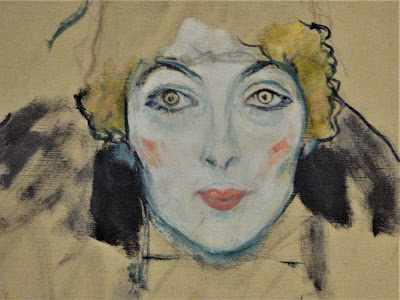 detail of Gustav Klimt's Portrait of a Lady (unfinished), seen at the Legion of Honor in 2017 in the special exhibit Klimt & Rodin: An Artistic Encounter 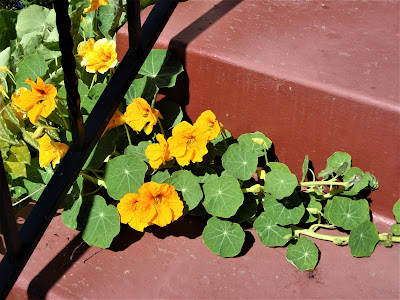 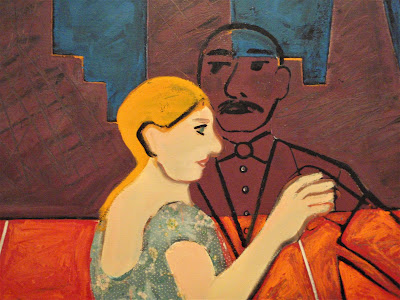 detail of Joan Brown's The Dancers in a City #2, at the San Francisco Museum of Modern Art 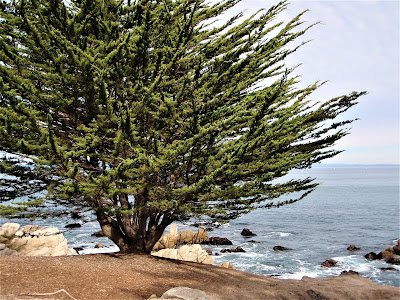 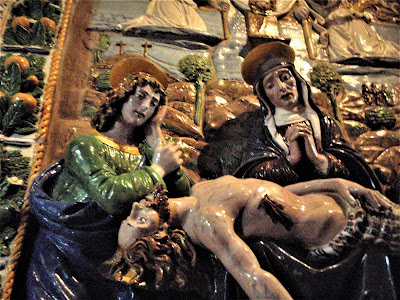 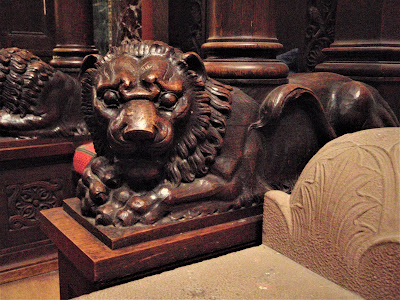 Another Opening, Another Show: May 2022

Widespread assertions & delusional assumptions aside, the pandemic is still prevalent, so check for cancellations & health precautions before you head out. Some venues have started suspending their mask & vaccination mandates, so take that into account depending on your personal comfort & risk level. I think suspending vaccination mandates is crazy, but this is one of many many topics on which I have not been consulted.

Theater of Yugen welcomes spring with two classic Japanese Kyōgen plays directed by Lluís Valls, Fukuro Yamabushi (The Owl Mountain Priest) & Boshibari (Tied to a Pole), along with Act 1 of a new Kyōgen adaptation by Valls of Jonson's Volpone. at NOHSpace in San Francisco on 29 - 30 April & 1 May.

San Francisco Playhouse presents Jessica Huang's The Paper Dreams of Harry Chin, directed by Jeffrey Lo, examining the repercussions of entering this country as an "illegal immigrant" during the period of the Chinese Exclusion Act & on into the present, & that runs from 4 May to 18 June.

Theater Rhinoceros presents the world premiere of Hart's Desire, a one-man musical conceived & performed by Mark Nadler, using the lyrics of Lorenz Hart & the words of Moss Hart, 12 - 15 May at the Gateway Theater in San Francisco. The Rhinoceros is also presenting, on 27 - 29 May in Yerba Buena Gardens, The Scottish Play – it's a little unclear, to me anyway, if that's the title or they're just making a theater in-joke about not saying Macbeth, but either way I'd expect a more or less free adaptation of the tragedy.

Custom Made Theater presents Blood at the Root, written by Dominique Morisseau & directed by Darryl V Jones, inspired by the case of the Jena 6, at the Phoenix Theater in San Francisco from 13 May to 5 June.

New Conservatory Theater Center celebrates its fortieth anniversary with Encore, a selection of musical numbers both well-known & obscure but worth knowing from over 50 shows NCTC has presented over the years; that's directed by Dennis Lickteig, with musical direction & arrangements by Joe Wicht, & you can see it from 13 May to 12 June.

Shotgun Players presents Adam Bock's A Small Fire, directed by Mary Ann Rodgers, about a woman whose world starts falling apart, or maybe just changing, & that's at the Ashby Stage from 14 May to 12 June.

Cal Shakes opens its season with Romeo y Juliet, adapted by Karen Zacarías & directed by KJ Sanchez, running from 25 May to 19 June at the Bruns Amphitheater.

Theater Lunatico returns with Sarah Ruhl's Melancholy Play, directed by Tina Taylor, at La Val's Subterranean Theater in Berkeley from 27 May to 19 June.

The Lamplighters present the Robert L Freedman / Steven Lutvak musical A Gentleman's Guide to Love & Murder (based on the same source as the film Kind Hearts & Coronets), directed by Michael Mohammed, at the Presidio Theater Performing Arts Center in San Francisco on 28 - 29 May & 3 - 5 June.

Wagner's second opera, Das Liebesverbot (based on Measure for Measure) is presented by Pocket Opera as No Love Allowed, direction by Nicolas A Garcia & musical direction by Jonathan Khuner, on 15 May at the Hillside Club in Berkeley, 22 May at the Legion of Honor in San Francisco, & 29 May at the Mountain View Center for the Performing Arts in Mountain View.

Cal Performances presents Lila Downs on 7 May in Zellerbach Hall.

Joseph Piazza leads the Golden Gate Men's Chorus in Love and War at Mission Dolores Basilica on 30 April & 1 May, singing works by, among others, Sibelius, Janáček, Dvořak, Monteverdi, as well as New Fire, a new work commissioned from Stephen Main; the concert will also feature the San Francisco Girls Chorus & Jubilate Orchestra in Handel’s Dixit Dominus.

Clerestory offers a revised version of its program Into the West from a few years back, & you can hear the results on 14 May in Healdsburg, 15 May at the Church of Saint Mary the Virgin in San Francisco, & 17 May at the Berkeley City Club (presented by Berkeley Chamber Performances).

The International Orange Chorale gives the west coast premiere of Rex Isenberg's Messiahs: False and True on 21 May at Saint Luke's Episcopal in San Francisco.

Cal Performances brings David Sedaris to Zellerbach Hall on 5 May.

On 15 May at the SF Jazz Center, Marc Bamuthi Joseph will present excerpts from his forthcoming opera, Race, Violence and the Sacred, based on the shootings at Pittsburgh's Tree of Life Synagogue & at Emanuel African Methodist Episcopal Church in Charleston; he will also "lead a broader conversation around race, violence, and the sacred".

City Arts & Lectures presents Angela Davis in conversation with Jelani Cobb at the Sydney Goldstein Theater on 24 May.

Here's what's happening orchestrally at the San Francisco Symphony this month: on 5 & 7 - 8 May, Xian Zhang conducts the Symphony premieres of Nokuthula Ngwenyama's Primal Message & Florence Price's Piano Concerto (with soloist Aaron Diehl), as well as the Dvořák 9, From the New World; on 13 - 15 May, Karina Canellakis conducts Richard Strauss's Don Quixote (with Alisa Weilerstein on solo cello), Lili Boulanger's D’un soir triste (a Symphony premiere), & Lutosławski's Concerto for Orchestra; on 20 -22 May, Ton Koopman conducts Mozart's Serenade Number 6, Serenata notturna, the Mozart 36, the Linz, & the Haydn 80 (a Symphony premiere, which I guess is bound to happen when you write 104 symphonies); the month closes out 26 - 28 May, with Nathalie Stutzmann conducting three works by Brahms – Nänie, Gesang der Parzen (Song of the Fates), & Schicksalslied (Song of Destiny), along with the Tchaikovsky 6.

Daniel Hope leads the New Century Chamber Orchestra with viola soloist Paul Neubauer in an all-Mozart program, featuring the Symphony in B-flat Major K 45b, the Sinfonia Concertante in E flat for Violin, Viola & Orchestra K 364, & the Symphony 40 in G minor K 550, & that's 12 May at First Congregational in Berkeley, 13 May at First United Methodist in Palo Alto, & 14 May at Herbst Theater in San Francisco.

Urs Leonhardt Steiner leads the Golden Gate Symphony Orchestra & Chorus in Verdi's Requiem (soloists not yet announced) on 22 May at Herbst Theater in San Francisco.

Leonard Slatkin leads the Oakland Symphony's season finale at the Paramount Theater on 20 May, when you can hear Cindy McTee's Circuits, Hovhaness's Symphony 2, Mysterious Mountain, & Michael Tippett's oratorio A Child of Our Time.

The San Francisco Symphony has two chamber music concerts this month: on 1 May at the Legion of Honor's Gunn Theater, you can hear Alexander Barantschik (violin), Peter Wyrick (cello), & Anton Nel (piano) performing works by Mozart, Beethoven, & Schubert; and on 29 May in Davies Hall you can hear members of the orchestra playing pieces by Jessie Montgomery, Britten, & Dvořák.

San Francisco Performances presents the Jerusalem Quartet on 5 May at Herbst Theater, where they will perform pieces by Mendelssohn, Webern, & Tchaikovsky.

The Emerson String Quartet comes to San Francisco Performances & Herbst Theater on 6 May, when they will perform pieces by the alliterative ensemble of Borodin, Barber, & Bartók.

San Francisco Performances brings pianist Richard Goode to Herbst Theater on 7 May, when he will perform works by Schubert, Schumann, & Bartók.

Paul Flight leads the California Bach Society in Bach's Saint John Passion on 6 May at Saint Mark's Lutheran in San Francisco, 7 May at First United Methodist in Palo Alto, & 8 May at First Congregational in Berkeley.

The Kronos Quartet comes to the SF Jazz Center on 7 - 8 May with a new work they commissioned, At War With Ourselves – 400 Years of You, for string quartet, chorus, & speaker, exploring "the ongoing conundrum of race relations and movements for social justice, civil rights, and resistance"; the composer is Michael Abels & the words are written & spoken by Nikky Finney, & there will also be a chorus led by Valérie Sainte-Agathe.

Earplay comes to Herbst Theater in San Francisco on 9 May to perform works by Reena Esmail, Stacy Garrop, & Tania León, as well as world premieres from Andrew Conklin (I Am Not Prokofiev, for piano, an Earplay commission) & Mika Pelo (Abandoned, for flute, clarinet, violin, viola, cello, & piano, an Earplay/Fromm Foundation commission).

Other Minds presents the latest in its series The Nature of Music on 11 May at the Goldman Theater of the David Brower Center in Berkeley, featuring Christopher Luna-Mega’s Night Music for reed quintet and electronics, performed by Splinter Reeds, & based on a "recording of the summer dusk and night sounds of insects at Walnut Creek Park in Albemarle County, Virginia".

Accordionist, pianist, & composer Sam Reider, joined by the Del Sol Quartet, visits the Center for New Music on 15 May to perform original works for solo piano & the premiere of a new work for accordion & string quartet.

Left Coast Chamber Ensemble continues Living in Color on 22 May at the Berkeley Hillside Club & on 23 May at Noe Valley Ministry in San Francisco, where they will perform works by Sarah Gibson (I Prefer Living In Color, the Left Coast Composition Contest Winner 2019), John Luther Adams, Szymanowski, Kenji Bunch, Errolyn Wallen, & Gabriel Fauré.

Soweto Kinch has two programs at the SF Jazz Center: Black Peril on 19 - 20 May, a "musical portrait" of the world 100 years ago, when a pandemic & anti-Black riots spread across the country, & White Juju on 21 - 22 May, exploring the recent reassessment of race relations in America & the way public spaces have honored Confederate traitors to America.

On 26 May at the SF Jazz Center, Jules Leyhe, accompanied by the Family Jules Band, will play his mentor Taj Mahal's The Natch'l Blues.

Alonzo King LINES Ballet opens its 40th anniversary season with a world premiere featuring vocalist Lisa Fisher & the company performing to a score by Jason Moran, & that's at the Yerba Buena Center on 13 - 15 May & 18 - 22 May.

The 1979 documentary The Wobblies plays at the Roxie starting 2 May; note that the 6:40 PM showing on 3 May will be followed by a conversation with director  Deborah Shaffer, moderated by filmmaker Connie Field.

The great Guy Maddin's Cowards Bend the Knee plays at the Roxie  on 7 May as part of Matchbox Cine's Tales from Winnipeg series.

The much-postponed 25th anniversary San Francisco Silent Film Festival will finally take place at the Castro Theater (with one program at the Roxie) from 5 to 11 May, with a program full of old favorites, new restorations, rarities, & even revisions (I'm really looking forward to DJ Spooky's Rebirth of a Nation), all with live musical accompaniment; you can buy individual tickets or a festival pass (passes purchased for the 2020 festival are still good!) statue of Juno, once in a Roman garden & now in the Museum of Fine Arts, Boston; the statue is over 13 feet high 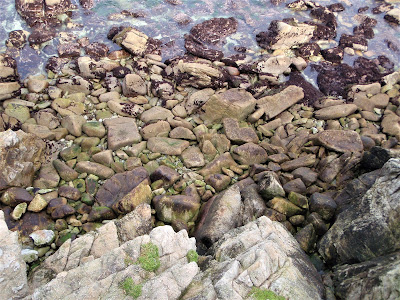 on the Monterey coast, January 2018 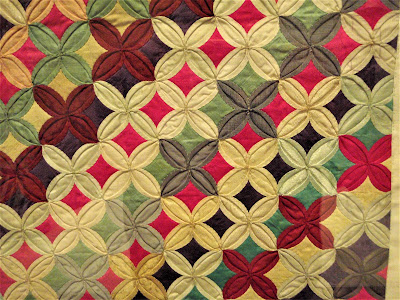