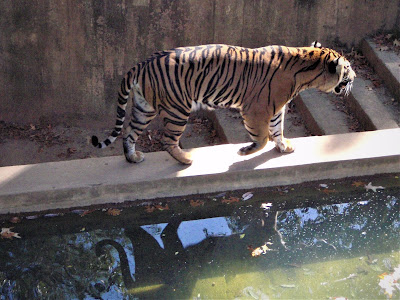 a tiger at the Smithsonian Institution's National Zoological Park in Washington, DC (from 2017)

Tomorrow begins the Lunar New Year: Year of the Tiger 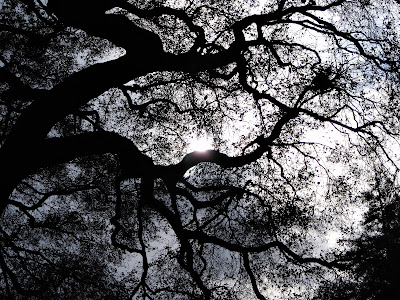 Another Opening, Another Show: February 2022

I hesitated before putting this list together, given the snowballing cancellations and postponements due to the Omicron variant, but things appear to be settling down in that regard – nonetheless, I'd suggest checking any events you're interested in to make sure they're still on (I deleted at least two entries while preparing this list, and who knows what will happen after I hit publish). Also be aware that many venues now require proof of a booster shot as well as vaccination, and some have specific guidelines on the type of mask you must wear while indoors.

Cal Performances presents the west coast premiere of Two Wings: The Music of Black America in Migration at Zellerbach Hall on 17 February; the program, created by jazz pianist Jason Moran and his wife, mezzo-soprano Alicia Hall Moran, explores the Great Migration and their family histories through music and text. The Morans will be joined by conductor Tania León, the Imani Winds, and other artists.

You can see The Apple Tree (music by Jerry Brock, lyrics by Sheldon Harnick, both better known for Fiddler on the Roof), led by Music Director Michael Horsley and Ensemble and Stage Director Michael Mohammed, at the San Francisco Conservatory of Music on 17 - 18 February.

Opera Parallèle presents Sophia's Forest, with music by Lembit Beecher and libretto by Hannah Moscovitch, at Grace Cathedral from 24 to 26 February.

The San Francisco Performances Salon Series, curated by tenor Nicholas Phan, wraps up this month with three further concerts exploring vocal music written by women (all are at the Education Studio at the War Memorial Veterans Building and start at 6:30): on 3 February, along with soprano Esther Tonea, mezzo-soprano Gabrielle Beatag, and pianist Robert Mollicone, Phan will perform songs of the Parisian Belle époque by Cecile Chaminade, Pauline Viardot, and Nadia and Lili Boulanger; on 10 February, Phan will be joined by soprano Mikayla Sager, baritone Edward Nelson, and pianist Carrie-Ann Matheson for works by Fanny Mendelssohn, Clara Schumann, Ethel Smythe, and Alma Mahler; and on 17 February, mezzo-soprano Gabrielle Beatag, bass-baritone Michael Sumuel, and pianist Shannon McGinnis will join Phan in performing pieces by Margaret Bonds, Ruth Crawford Seeger, Florence Price, and other modern or contemporary composers.

Cécile McLorin Salvant and her quintet, featuring pianist Sullivan Fortner, will play the SF Jazz Center from 10 to 13 February.

Here's what going on at the San Francisco Symphony this month: on 3, 4, and 6 February, former Music Director Herbert Blomstedt conducts the the Nielsen 4 and the Beethoven 5; on 5 February, conductor Yue Bao, joined by violinist Bomsori and cellist Amos Yang, welcome the Lunar New Year (the Year of the Tiger) with a program of Chinese music by Huan-zhi Li, Chen Gang & He Zhanhao, Huang Ruo, Tan Dun, Texu Kim, Tyzen Hsiao, and Liu Yuan; on 11 - 12 February, conductor Perry So, joined by pipa virtuoso Wu Man, perform an entire program of SF Symphony premieres, including Lou Harrison's Concerto for Pipa with String Orchestra along with works by Texu Kim, Younghi Pagh-Paan, Takashi Yoshimatsu, and Zhou Long; from 17 to 19 February, concerts that were originally scheduled to be conducted by the late Michael Morgan are now being performed in his memory: conductors Earl Lee, Akiko Fujimoto, and Daniel Bartholomew-Poyser, along with mezzo-soprano Melody Wilson, will perform the Brahms Alto Rhapsody and the Florence Price 3, as well as works by Carlos Simon, César Franck, and traditional spirituals arranged by Jack Perla; and on 24, 26, and 27 February, current Music Director Esa-Pekka Salonen leads the SFS premiere of Beethoven's complete ballet music for The Creatures of Prometheus, which will have an animation accompaniment by Hillary Leben.

David Milnes leads the UC Berkeley Symphony Orchestra in the Tchaikovsky 6, the Pathétique, at Hertz Hall on 11 - 12 February.

On 12 February at the San Francisco Conservatory of Music, Edwin Outwater will lead the SFCM Orchestra in Ravel's Alborada del Gracioso and Daphnis and Chloe Suite No. 2, Gabriela Frank's Walkabout: Concerto for Orchestra, and the world premiere of Juan Prieto's Romancero gitano: Preciosa y el aire.

The Golden Gate Symphony, led by Urs Leonhardt Steiner, will perform the Beethoven Piano Concerto 3 with soloist Elektra Schmidt, along with the Beethoven 6, the Pastoral, at Herbst Theater on 22 February.

One Found Sound will perform Viet Cuong by Thu Điếu, with soprano soloist Bích-Vân Nguyễn, Clarice Assad's Impressions, and the Beethoven 8 with "an immersive visual experience designed by Max Savage" at Heron Arts in San Francisco on 26 February.

The San Francisco Chamber Orchestra, led by Ben Simon, will perform world premieres by Carlos Simon and Jessica Hunt (both composers associated with Gabriela Lena Frank’s Creative Academy of Music) along with the Beethoven 8 on 25 February at Herbst Theater in San Francisco, 26 February at First United Methodist in Palo Alto, and 27 February at First Congregational in Berkeley.

On 19 February San Francisco Performances continues its Saturday morning lecture series at Herbst Theater with musicologist Robert Greenberg and the Alexander String Quartet exploring the chamber music of Dvořák; joined by pianist Jeffrey LaDeur, they will discuss and perform Bagatelles, Op. 47 for two violins, cello, harmonium or piano, and the Piano Quartet, Op. 87.

Cal Performances presents pianist Eric Lu at Hertz Hall on 6 February, where he will play pieces by Chopin, Schumann, Brahms, and Schubert.

Guitarist Marc Ribot appears at the SF Jazz Center from 10 to 13 February.

Trumpeter Giveton Gelin is at the SF Jazz Center on 17 February.

Cal Performances presents the Spektral Quartet playing the world premiere of Samuel Adams's Current, a Cal Performances co-commission, along with Philip Glass's String Quartet 2, Company (referring to Beckett's short novel, not Sondheim's musical), and Schubert's String Quartet No. 13 in A minor, D. 804, Rosamunde, and you can hear it all on 13 February at Hertz Hall.

On 18 February at Saint Mark's Lutheran, San Francisco Performances presents violinist Johnny Gandelsman playing a transcription for violin of Bach's Suite No. 3 For Solo Cello, BWV 1009, along with contemporary American works (commissioned as part of his series This Is America) by Conrad Tao, Ebun Oguntola, Tyshawn Sorey, Clarice Assad (this one is a world premiere, commissioned by SF Performances), Angelica Negron, and Rhiannon Giddens.

And there's a second mostly modern program accompanied by Bach, again presented by San Francisco Performances, and again at Saint Mark's Lutheran, but on 26 February: cellist Matt Haimovitz will play the Bach Prelude from Suite No. 2 in D Minor, BWV 1008 and Suite No. 3 in C Major, BWV 1009 along with works by Missy Mazzoli, Gordon Getty, Vijay Iyer, David Balakrishnan, Nico Muhly, Tomeka Reid, and Philip Glass (the last three are world premieres).

Here are the live events this month at the Center for New Music: on 6 February the Symbiotics Quartet (Ben Davis, Chris Brown, Danishto Rivero, Marshall Trammell) will improvise new sounds for you and on 11 February you can hear Duo Improvisations with Evelyn Davis and Phillip Greenlief along with Motoko Honda and Beth Schenck.

The SF Jazz Center opens the month with a Jazz & Social Justice series in the Joe Henderson Lab, starting on 3 February with singer and harpist Destiny Muhammad playing works inspired by the late Richmond-based quilter Rosie Lee Tompkins, and continuing on 4 February with Diana Gameros, performing music from the documentary Dear Homeland about her experiences as an undocumented immigrant, 5 February with Jaz Sawyer's Quartet along with spoken-word performer and anti-incarceration activist Tongo Eisen-Martin, and concluding on 6 February with composer and pianist Jon Jang with works reflecting immigration policies and the WWII internment of Japanese-Americans.

Lil Buck brings the west coast premiere of Memphis Jookin’: The Show to Zellerbach Hall under the auspices of Cal Performances 25 - 26 February.

The San Francisco Silent Film Festival presents Chaplin's glorious City Lights on 19 February at the Paramount Theater in Oakland, with live accompaniment by the Oakland Symphony Orchestra, conducted for the occasion by Timothy Brock. 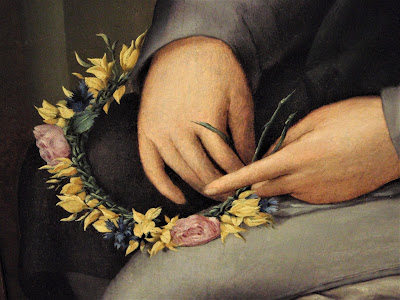 detail from Portrait of a Young Man Weaving a Wreath of Flowers by Pier Francesco Foschi, now in the Utah Museum of Fine Arts
Posted by Patrick J. Vaz at 5:00 AM No comments: 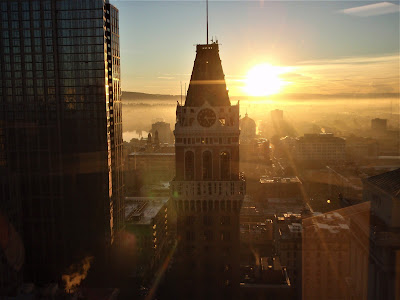 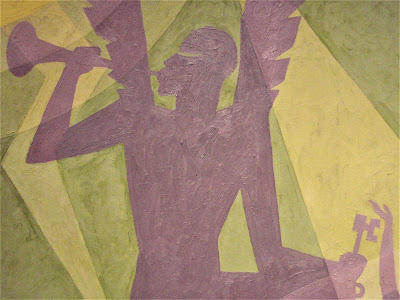 detail of The Judgment Day by Aaron Douglas, now in the National Gallery of Art, Washington DC 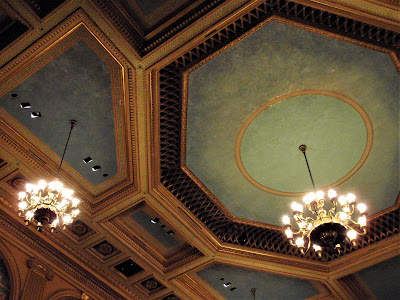 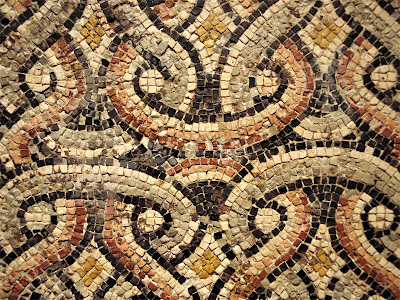 detail of a mosaic pavement panel from Roman Syria, early Byzantine period, now in the Utah Museum of Fine Arts 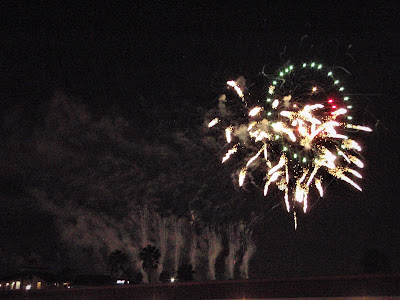 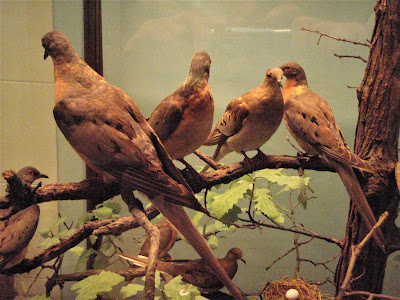