Another Opening, Another Show: July 2022

The usual pandemic warnings apply, once again: check for cancellations or postponements, along with vaccine & masking requirements – the latter seem to be shifting daily, so be sure to consider not only what is required but how comfortable you are with it – some people are fine with masks being recommended but not required, others very much are not, so know before you go. It's unfortunate that social distancing is, for obvious reasons, not even mentioned these days by most performing arts groups, but it might also be useful to keep in mind how quickly you can get away from any crowds (of course, that's always been a consideration for some of us).

As was the case in the Before Time, July is a fairly light month, though there's a surprising amount going on operatically, along with American Bach Soloists' annual summer festival, & some exciting art exhibits opening, so here we go:

Custom Made Theater presents José Rivera's References to Salvador Dalí Make Me Hot, directed by Katja Rivera, a magical-realist play about a woman waiting for her husband to return from war, from 1 to 24 July.

Berkeley Rep presents Sanctuary City, about the struggles of two DREAMers, written by Martyna Majok & directed by David Mendizábal, from 8 July to 14 August.

Michael Pollan will be "in conversation" with Lauren Schiller at City Arts & Lectures on 26 July.

You still have a few chances this month to catch the end of San Francisco Opera's season, as Don Giovanni plays on 2 July & Dream of the Red Chamber on 1 & 3 July, but after that SFO switches to summer mode, with the Merola Program kicking in on 9 July at the San Francisco Conservatory of Music with a program put together by Craig Terry featuring the Merolini in selections from what is now usually called "the American Songbook"; then on 14 & 16 July, also at the Conservatory of Music, you can hear the Merolini in staged scenes (directed by Jose Maria Condemi & conducted by Jorge Parodi) from works by Latin American & Spanish composers, including Manuel de Falla & Daniél Catán.

On 6 July at the Italian Cultural Institute of San Francisco Céline Ricci, Artistic Director of Ars Minerva, joined by pianist Lindsay Rader & mezzo-sopranos Nikola Printz & Deborah Rosengaus Martinez, will preview their production of Leonardo Vinci's Astianatte, slated for this October; the presentation is free but registration is required.

Festival Opera in Walnut Creek presents Norma on 8 & 10 July at the Lesher Center for the Arts, conducted by Bryan Nies & directed by Mark Foehringer, with Shana Blake Hill in the title role.

Pocket Opera will present their version of La Traviata, conducted by Mary Chun & directed by Elly Lichenstein, with Michelle Drever as Violetta & Sergio González as Alfredo, on 10 July at the Mountain View Center for the Performing Arts, 17 July at the Hillside Club in Berkeley, & 24 July at the Legion of Honor in San Francisco.

Opera Parallèle will become the first company to have staged all three of Philip Glass's Cocteau operas (in case you're wondering, the other two are Orphée  & Les Enfants Terribles) when it presents La Belle et la Bête (conducted by Nicole Paiement & staged by Brian Staufenbiel, with soprano Vanessa Becerra as la Belle & baritone Hadleigh Adams as La Bête) at SF Jazz's Miner Auditorium on 14 - 17 July. On 29 June at the Academy SF there will be a panel discussion, A Tale as Old as Time: Exploring Queer History and Identity Through Beauty and the Beast, with moderator Michael "Mojo" Mohammed & panelists Dr. Ellie Zara Ley & baritone Hadleigh Adams; the discussion is free but registration is required.

On 13 July at Davies Hall you can hear the San Francisco Symphony, along with the San Francisco Gay Men's Chorus & the Oakland Interfaith Gospel Choir, in a program called Final Words (nothing more specific has been announced yet), led by Dr. Timothy Seelig.

The Martha Redbone Roots Project appears at Freight & Salvage in Berkeley on 19 July.

On 28 July at the San Francisco Conservatory of Music you can hear the last of this year's Schwabacher Recital series, with baritone Sidney Outlaw & pianist Warren Jones delivering a program based on their album Lament (named after the Langston Hughes poem Lament for Dark Peoples), featuring composers  Dorothy Rudd Moore, Robert Owens, & Harry T Burleigh.

The San Francisco Symphony presents An Evening with Bernadette Peters on 30 July.

At the Center for New Music on 9 July, the Opus Project presents Opus 95, which is, as you might guess, the Opus 95 works by composers ranging from the baroque to our contemporaries, including Buxtehude, Bach, Schubert, Schumann, Wilhelm Taubert, Alexandre Dubuque. Brahms, Dvořák, Fauré, Ignaz Brull, René Lenormand,  Benjamin Godard, Luise Greger, Stravinsky, Poulenc, Mark Alburger, Cyril Plante. & Roberto Novegno, "with a couple of other pieces thrown in, because we like them!"

Jeffrey Thomas leads the American Bach Soloists in their annual summer festival, held at Herbst Theater from 23 to 31 July; there are some social gatherings but the musical events are:

Soprano Rose Hegele & pianist Sarah Cahill visit the Center for New Music on 16 July, where Hegele will perform I Awake & I Am, "a short recital of works for solo voice and voice and electronics", & Cahill will perform pieces that she has commissioned from Ursula Mamlok, Regina Harris Baiocchi, Maggi Payne, & Mary Watkins, as well as pieces by Lois V Vierk and Aida Shirazi.

Pink Martini appears with the San Francisco Symphony (conducted for the occasion by Edwin Outwater) on 28 July.

The SF Jazz Center has several theme weeks this month:

Next up is the Pan-American Songbook, featuring the Afro-Cuban All Stars with Juan de Marcos from 21 to 24 July; Monsieur Periné on 20 July; Quique Escamilla on 21 July; the Villalobos Brothers from 22 to 23 July; & Los Cenzontles on 24 July.

Diego Rivera's America, focusing on the period from the 1920s to the mid-1940s, will have more than 150 of his paintings, frescoes, & drawings, as well as three galleries with large-scale film projections of his murals, & opens at the San Francisco Museum of Modern Art on 16 July, running through 2 January 2023.

The Oakland Museum of California opens Hella Feminist, made up of items from the museum's collections as well as newly commissioned art works, on 29 July.

The Berkeley Art Museum / Pacific Film Archive presents Forever Kinuyo Tanaka beginning on 8 July; presenting not only six of the films Tanaka starred in, including some rarities, but the six films she directed, the latter in newly restored prints.

Starting July 29 at the Berkeley Art Museum / Pacific Film Archive, you can see From the Front Page to the Front Lines: The Essential Sam Fuller, featuring many of the director's most celebrated films. 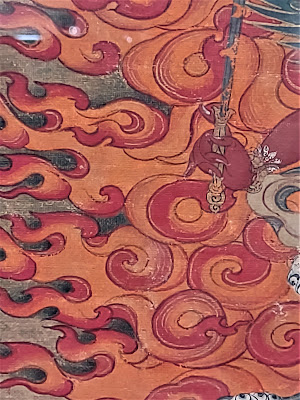 detail of a Thangka with Wrathful Deities of the Bardo, from 18th century Tibet & seen at the Berkeley Art Museum / Pacific Film Archive 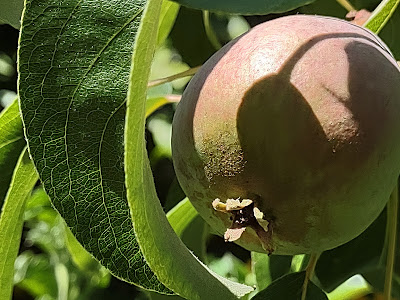 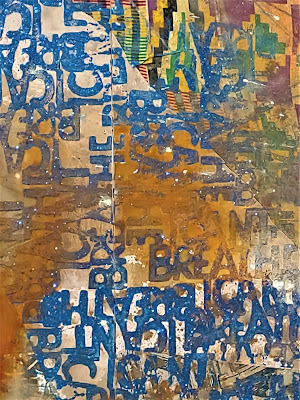 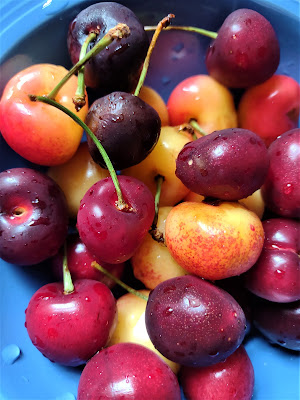 (Prompts into his ear in a pig's whisper.) Insects of the day spend their brief existence in reiterated coition, lured by the smell of the inferiorly pulchritudinous female possessing extendified pudendal verve in dorsal region. Pretty Poll! (His yellow parrotbeak gabbles nasally.) They had a proverb in the Carpathians in or about the year five thousand five hundred and fifty of our era. One tablespoonful of honey will attract friend Bruin more than half a dozen barrels of first choice malt vinegar. Bear's buzz bothers bees. But of this apart. At another time we may resume. We were very pleased, we others. (He coughs and, bending his brow, rubs his nose thoughtfully with a scooping hand.) You shall find that these night insects follow the light. An illusion for remember their complex unadjustable eye. For all these knotty points see the seventeenth book of my Fundamentals of Sexology or the Love Passion which Doctor L. B. says is the book sensation of the year. Some, to example, there are again whose movements are automatic. Perceive. That is his appropriate sun. Nightbird nightsun nighttown. Chase me, Charley! Buzz!

Bee or bluebottle too other day butting shadow on wall dazed self then me wandered dazed down shirt good job I . . .

(His face impassive, laughs in a rich feminine key.) Splendid! Spanish fly in his fly or mustard plaster on his dibble. (He gobbles gluttonously with turkey wattles.) Bubbly jock! Bubbly jock! Where are we? Open Sesame! Cometh forth! (He unrolls his parchment rapidly and reads, his glowworm's nose running backwards over the letters which he claws.) Stay, good friend. I bring thee thy answer. Redbank oysters will shortly be upon us. I'm the best o'cook. Those succulent bivalves may help us and the truffles of Perigord, tubers dislodged through mister omnivorous porker, were unsurpassed in cases of nervous debility or viragitis. Though they stink yet they sting. (He wags head with cackling raillery.) Jocular. With my eyeglass in my ocular.

& once again, happy Bloomsday to my mountain flowers. 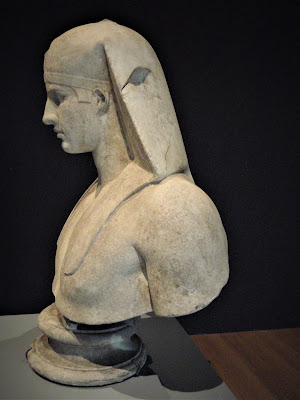 portrait bust of Antinous as Osiris, now in the Art Institute of Chicago 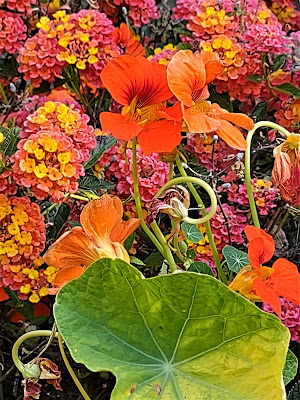 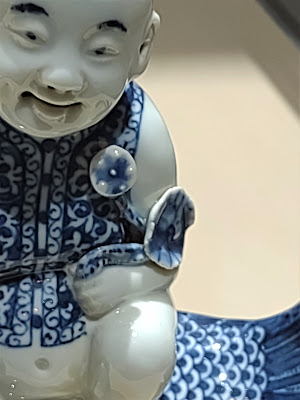 detail of a water dropper with a design of a boy sitting on a carp, at the Asian Art Museum in San Francisco 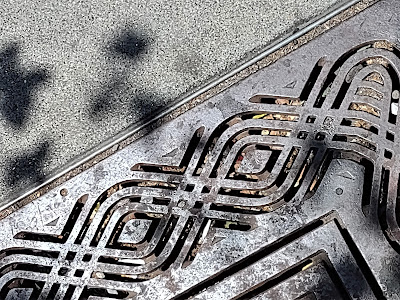 a sidewalk on Broadway in Oakland