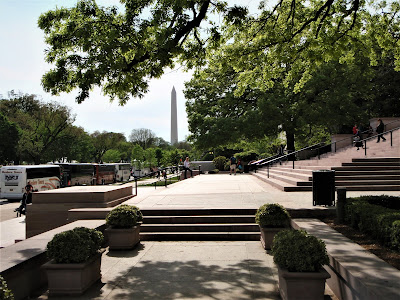 the Washington Monument from the steps of the National Gallery of Art, April 2019
Posted by Patrick J. Vaz at 5:00 AM No comments:

Shotgun Players, as part of their Champagne Reading Series, and Campo Santo co-present Before & Over, a new play by Star Finch, directed by Sean San Jose on 10 - 11 June at the Ashby Stage.

Aurora Theater presents the Bay Area premiere of Joan Didion's The Year of Magical Thinking, directed by Nancy Carlin, from 21 June to 21 July.

San Francisco Playhouse closes its season with Kander & Ebb's Cabaret, directed by Susi Damilano, with music direction by Dave Dobrusky and choreography by Nicole Helfer, from 26 June to 14 September.

The Wagner Society of Northern California presents Metropolitan Opera radio broadcaster Will Berger on 1 June at the Jewish Community Center in San Francisco, speaking on Technology, Opera, and Wagner.

Pocket Opera presents its version of Offenbach's Tales of Hoffmann, staged by Phil Lowery with music direction by Frank Johnson, on 2 June at the Hillside Club in Berkeley, 9 June at the Legion of Honor in San Francisco, and 16 June at the Oshman Family JCC in Palo Alto.

The San Francisco Symphony ends its seasons with a semi-staged (by James Bonas) production of Ravel's L'Enfant et les sortilèges, conducted by Michael Tilson Thomas and starring mezzo-soprano Isabel Leonard; the originally announced companion piece, Britten's Noye's Fludde, has been cancelled and the replacement is currently listed as that old favorite, TBD. You can experience it all on 27 and 29 - 30 June. (Be aware that the matinee on the 30th coincides with the Gay Pride Parade and transportation will be difficult.)

Choral
I really wish they were doing something other than the overly familiar Carmina Burana, but if you are of a mind to hear that piece you probably can't do much better than the excellent forces scheduled for 4 June at Davies Hall, when Christian Reif leads the San Francisco Symphony and Chorus (and the Ragazzi Boys Chorus) along with soloists Nikki Einfeld (soprano), Nicholas Phan (tenor), and Hadleigh Adams (baritone).

Chanticleer explores Sacred Ground throughout the greater Bay Area from 8 to 16 June.


Orchestral
On 8 June at the San Francisco Conservatory of Music, Dawn Harms leads the Bay Area Rainbow Symphony in Elfrida Andrée's Prelude to Fritiofs Saga, Shawn Krichner's Brokeback Mountain Suite (with the composer as the featured pianist), and the Berlioz Symphonie fantastique.

At the San Francisco Symphony, conductor Francesco Lecce-Chong leads the ballet music from Mozart's Idomeneo as well as his piano concerto 24 (with soloist David Fray), Verdi's overture to I vespri siciliani, and Elgar's In the South (Alassio) on 6 - 8 June; Michael Tilson Thomas conducts the Mahler 9 on 13 - 16 June; and then Tilson Thomas returns 20 - 22 June to conduct his own Street Song for Symphonic Brass, the San Francisco premiere of Steve Reich's Music for Ensemble and Orchestra (a Symphony co-commission), and the Prokofiev Piano Concerto 2 (with soloist Yefim Bronfman).

Christian Reif leads the San Francisco Youth Symphony on 16 June in Davies Hall; this final concert of their season features Prelude 1 from Three American Preludes by Detley Glanert, selections from the Mahler 1, and the Tchaikovsky Violin Concerto with soloist Karen Gomyo.

Chamber Music
Musicians from the San Francisco Symphony play chamber works by Schubert, Bruch, and Gaubert on 2 June and unfortunately it's in the unwieldy barn that is Davies Hall.

Modern / Contemporary Music
The Other Minds Festival continues with two noteworthy (yes, it's a pun) concerts: The Pressure, an evening-length multimedia work on themes from German Expressionist horror films with music by Brian Baumbusch and words by Paul Baumbusch on 15 June at the YBCA Theater and then, on 16 June at YBCA, the continued exploration of the microtonal compositions of Ivan Wyschnegradsky – previously we heard the Arditti play his string quartets, and now we get to hear his piano works.

The summer solstice is 21 June, which means the annual Garden of Memory event will take place at the Columbarium in the Chapel of the Chimes in Oakland, featuring an abundance of local new music luminaries.

And as always, check the calendar at the Center for New Music frequently, as concerts are added all the time; some things that catch my eye in the current June listings are: Sl(e)ight Ensemble, along with visual artist Jessie Austin, performing the program Angles of Times, featuring new works with alternate methods of notating time, on 7 June; bass-baritone Jóhann Schram Reed and pianist Taylor Chan performing the world premiere of Patricia Wallinga's setting of Eliot's The Love Song of J Alfred Prufrock, along with works by David Conte and other modern American art songs, on 8 June; the CD release concert for pianist Nadia Shpachenko's new recording The Poetry of Places, including five SF premieres by Amy Beth Kirsten, Hannah Lash, James Matheson, Harold Meltzer, and Jack Van Zandt, along with two world premieres and two west coast premieres from Paul Chihara, Thea Musgrave, José Serebrier, and Lewis Spratlan, on 18 June; and pianist Ju-Ping Song playing new works by Lois Vierk, Nicole Lizée, Rahilia Hasanova, and Kate Moore, on 28 June.

Visual Arts
I've always wished the Asian Art Museum would show more woodblock prints, so despite my feeling that tattoos are tediously ubiquitous these days I'm looking forward to Tattoos in Japanese Prints, running from 31 May to 18 August. The Museum has also re-opened its renovated third floor, featuring Masterpieces in Context.
Posted by Patrick J. Vaz at 5:00 AM No comments: 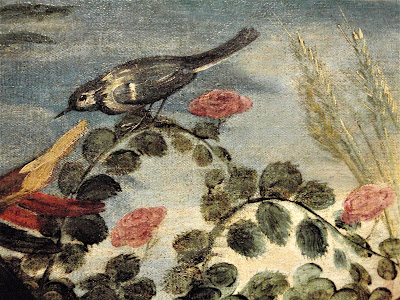 detail of Summer by Tintoretto; part of the exhibit Tintoretto: Artist of Renaissance Venice at the National Gallery of Art in Washington DC
Posted by Patrick J. Vaz at 5:00 AM No comments: 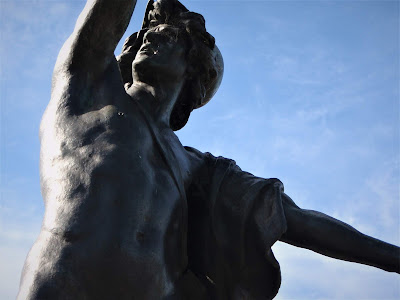 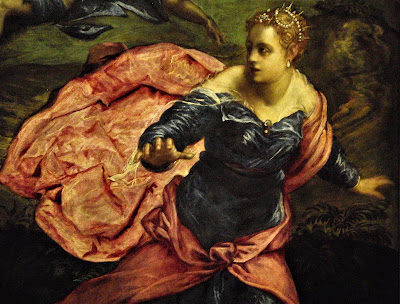 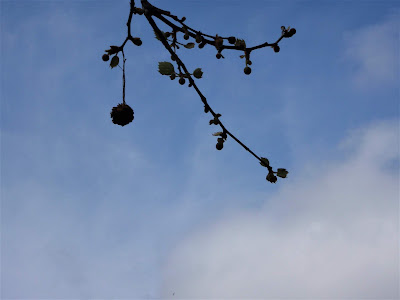 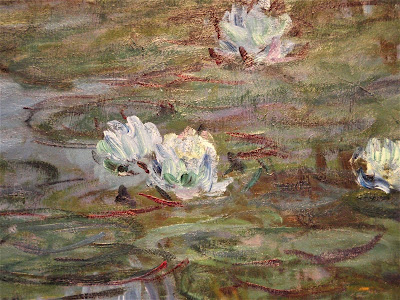 detail of Water Lilies (1914 - 1915) by Claude Monet; normally found at the Portland Art Museum in Oregon but seen at the de Young Museum in San Francisco as part of the exhibit Monet: The Late Years
Posted by Patrick J. Vaz at 5:00 AM No comments: 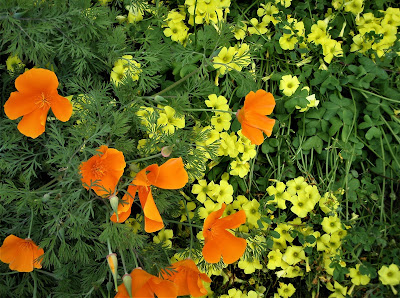 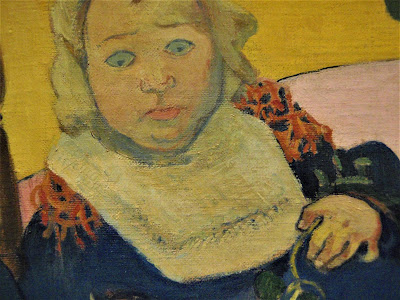 a detail of Two Children by Paul Gauguin, painted around 1889 in Paris or Brittany; seen at the de Young Museum in San Francisco as part of the exhibit Paul Gauguin: A Spiritual Journey but usually found at the Ny Carlsberg Glyptotek in Copenhagen

This child looks seriously uneasy. The second time I went to this exhibit a man next to me said, "That child is on a bad acid trip."
Posted by Patrick J. Vaz at 5:00 AM No comments: 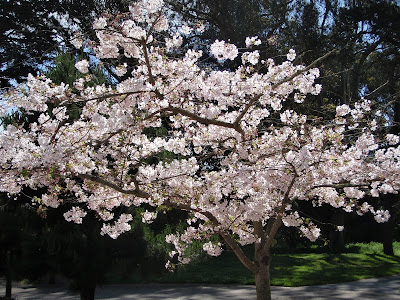 a flowering tree in Golden Gate Park, San Francisco; April 2019
Posted by Patrick J. Vaz at 5:00 AM No comments: