This seems like a shorter list than usual, but appearances, as we all know, deceive: this month is full of festivals, and if you unpack them you will find dozens of performances awaiting you: there's the huge Berkeley [Early Music] Festival & Exhibition, Ojai at Berkeley at Cal Performances, and of course three cycles of Wagner's Der Ring des Nibelungen at the San Francisco Opera; in addition, there are some overlaps and carry-overs from last month – the San Francisco Silent Film Festival, always a highlight of the year, runs from 30 May to 3 June, and a profound and dazzling production of Tony Kushner's epic Angels in America is running through July at Berkeley Rep (I recommend one of the marathon days, if that is a possibility for you).

Operatic
The big opera excuse me, music drama event this month is obviously the San Francisco Opera's revival of Francesca Zambello's "American" production of Wagner's Ring cycle, with Donald Runnicles conducting and a cast that includes Iréne Theorin (replacing the indisposed Evelyn Herlitzius as Brünnhilde), Greer Grimsley (Wotan/The Wanderer), Daniel Brenna (Siegfried), Falk Struckmann (Alberich), Karita Mattila (Sieglinde), Brandon Jovanovich (Froh and Siegmund), and Jamie Barton (Fricka and Waltraute). There are three cycles though you can now buy tickets to individual operas as well. There are lots of ancillary activities planned; of particular note are the Wagner Chorus Concerts and the three different symposia sponsored by the Wagner Society of Northern California.

If you're not in the mood for the creation and destruction of the universe and everything in between, Pocket Opera is presenting Donizetti's Lucrezia Borgia on 10 June at the Hillside Club in Berkeley and 17 June at the Legion of Honor in San Francisco (both performances are matinees).

At the San Francisco Symphony, Michael Tilson Thomas conducts the 1869 original version of Mussorgsky's Boris Godunov on 14 - 15 and 17 (matinee) June, in a production semi-staged by James Darrah, whose work is always worth experiencing.

As part of the Berkeley [Early Music] Festival & Exhibition, the San Francisco Girls Chorus and Voices of Music will perform Purcell's Dido and Aeneas on 7 and 9 (matinee) June at First Congregational Church in Berkeley.

And to glance ahead at the end of the year, you can mark your calendars for the latest baroque revival from Ars Minerva, which will present Giovanni Porta's Ifigenia in Aulide at the ODC Theater on 30 November and 1 December (as well as an abridged concert version on 9 November at First Congregational in Berkeley). You can also help make it happen by donating to their Indiegogo campaign.

Orchestral
The Bay Area Rainbow Symphony, led by Dawn Harms, plays a movement from Freitof's Suite by Elfrida Andrée, Tchaikovsky's Serenade for Strings, and an excerpt from Bernstein's Trouble in Tahiti on 9 June at the San Francisco Conservatory of Music.

At the San Francisco Symphony, Susanna Mälkki leads the Tchaikovsky Violin Concerto with soloist Nikolaj Znaider, Kaija Saariaho's Laterna Magica, and Scriabin's Poem of Ecstasy on 7 - 9 June; then Michael Tilson Thomas returns to close out the season with the Sibelius 6 and 7 and the Rachmaninoff Piano Concerto 3 with soloist Daniil Trifonov on 21 - 24 June and the Mahler 3 with soloist Sasha Cooke on 28 - 30 June.

Early / Baroque Music
This month's big event in this category is of course the bi-annual Berkeley [Early Music] Festival & Exhibition, presented from 3 to 10 June by the San Francisco Early Music Society. I was going to list some particularly interesting-sounding concerts but realized that would mean pretty much just typing out the whole schedule. Concerts start anytime from 11:00 AM to 10:00 PM, so you may need to be guided by what is available when you are. While you're checking out the Mainstage schedule, be sure to take a look at the Fringe events as well. And in conjunction with the festival, the Berkeley Art Museum / Pacific Film Archive is presenting a fun-looking series of films related to early music, ranging from performances of Monteverdi and Handel to Barry Lyndon and Amadeus.

Modern / Contemporary Music
Ojai at Berkeley makes its annual appearance mid-June under the auspices of Cal Performances; this year the musical curator is violinist Patricia Kopatchinskaja. As previously noted, the concert I'm most anticipating is the 15 June premiere of a new piece by Michael Hersch, with the composer himself on piano, along with sopranos Ah Young Hong and Kiera Duffy, pianist Amy Yang, Gary Louie on alto saxophone, and members of the Mahler Chamber Orchestra led by Tito Muñoz. But the other three concerts also look good: on 14 June, a program with the sort of obnoxious title Bye Bye Beethoven, featuring works by Bach, Haydn, Beethoven, Ives, Cage, and Kurtág, along with commentary and surprises; on 16 June (matinee), a concert of Romanian and Moldovan Folk Music, for which Kopatchinskaja is joined by her parents Viktor and Emilia on cimbalom and violin; and on 16 June (evening) music of Bartók, Stravinsky, and Ligeti. All programs are in Zellerbach Hall.

Curium, a new piano trio named after the ninety-sixth element in the periodic table (which was named for Marie Curie), will perform works by Chen Yi, Kaija Saariaho, and Shostakovich on 22 June at Old First Concerts.

Pianist and composer Amy Stephens visits Old First Concerts on 24 June to perform the world premiere of her latest work, Becoming, as well as the west coast premieres of works by Catherine Rollin and David Canfield.

As always, the Center for New Music has an interesting array of concerts, with new ones added frequently, so check their calendar for updates. Some things that catch my eye for June in the current listings: the Northern Lights Campout Music Party (part of the HUSH series curated by Julia Ogrydziak) on 2 June; Air: a Tribute to Cecil Taylor, a free concert on 10 June in honor of the late jazz artist, led by the Rova Saxophone Quarter; Nadia Shpachenko's Quotations and Homages CD release party on 20 June; Samuel Blaser and Marc Ducret on 24 June; and Visual Piano & Friends, featuring composer/pianist Francesco Di Fiore and video artist Valeria Di Matteo along with the ZOFO piano duo and saxophonist Michael Hernandez on 28 June.

Cinematic
The Golden Gate Symphony, led by Urs Leonhardt Steiner, presents Eisenstein's Alexander Nevsky with Prokofiev's score played live (with soloist mezzo-soprano Elizabeth Baker). The afternoon will also include the world premiere of Concert Music by their resident composer Jan Pusina and a new transcription by Stardust Doherty of the symphonic poem Mtsyri (The Novice) by Mikhail Ippolitov-Ivanov. That's 3 June at Herbst Theater.

The Berkeley Art Museum / Pacific Film Archive has a film series from 7 to 13 July called The Luminous Legacy of Greta Garbo, and if you haven't seen Flesh and the Devil or Queen Christina then you should (which is not to say you shouldn't see all the other films as well, if you can).

Visual Arts
Opening just at the month's end is a particularly enticing exhibit at the Legion of Honor: Truth and Beauty: The Pre-Raphaelites and the Old Masters opens on 30 June and runs until 30 September.
Posted by Patrick J. Vaz at 6:00 AM 2 comments: 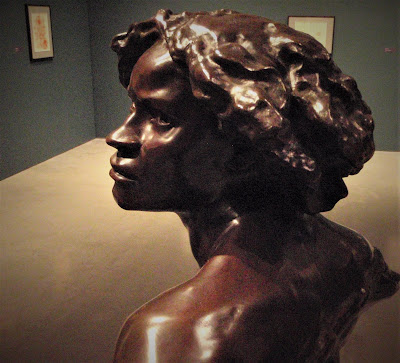 La Négresse, a bronze by Jean-Baptiste Carpeaux, currently on display in the special exhibit Agony in Effigy: Art, Truth, Pain, and the Body, running until 17 June at the Berkeley Art Museum / Pacific Film Archive
Posted by Patrick J. Vaz at 6:00 AM No comments: 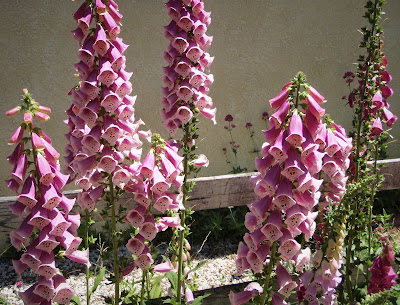 Email ThisBlogThis!Share to TwitterShare to FacebookShare to Pinterest
Labels: I am a camera, in a green shade 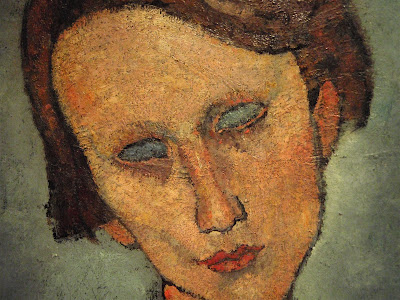 detail of the portrait of Pierre-Edouard Baranowski painted by Amedeo Modigliani around 1918 and now hanging in the de Young Museum in San Francisco
Posted by Patrick J. Vaz at 6:00 AM No comments: 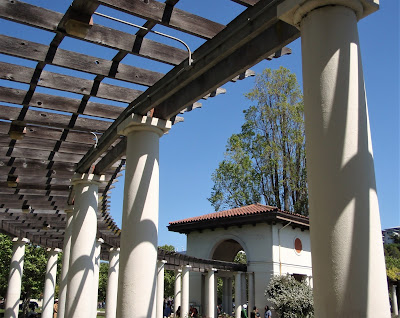 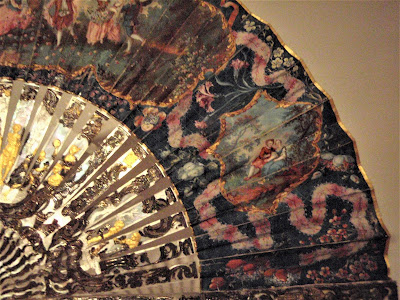 detail of a circa 1760 fan from Germany showing Country Dances; from the de Young Museum's special exhibit Fans of the Eighteenth Century
Posted by Patrick J. Vaz at 6:00 AM No comments: 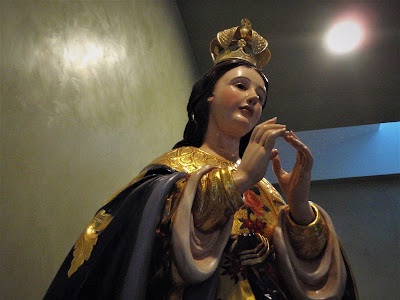 statue of the Virgin Mary in the Chapel of the Holy Family in the Cathedral of Christ the Light, Oakland, April 2018
Posted by Patrick J. Vaz at 6:00 AM No comments: 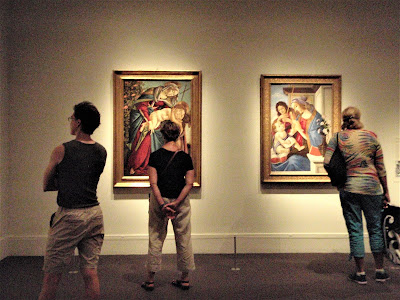 contemplating Botticellis at the Museum of Fine Arts in Boston, during the special exhibition Botticelli and the Search for the Divine in June 2017
Posted by Patrick J. Vaz at 6:00 AM No comments: 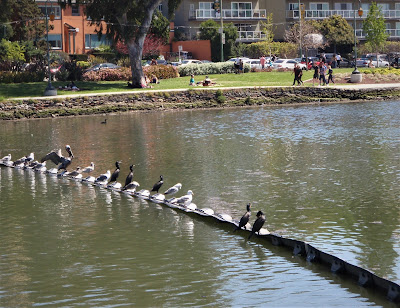 birds (including a pelican) in a row on Lake Merritt, Oakland, April 2018
Posted by Patrick J. Vaz at 6:00 AM No comments:

A new wind-and-brass chamber ensemble, Nomad Session, is ending its inaugural season with the world premiere of Cool Grey City by local composer Nick Benavides, a work in three movements inspired by different hidden spaces in San Francisco, which will be accompanied by a Maggie Biedelman video. That's on 18 May at The Lab, conveniently located at 2948 16th Street in San Francisco, one block from the 16th Street BART station.
Posted by Patrick J. Vaz at 12:26 PM No comments: