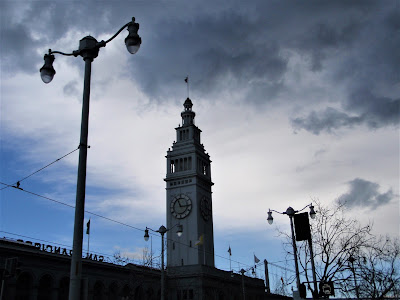 the Ferry Building, San Francisco, March 2018
Posted by Patrick J. Vaz at 6:00 AM No comments: 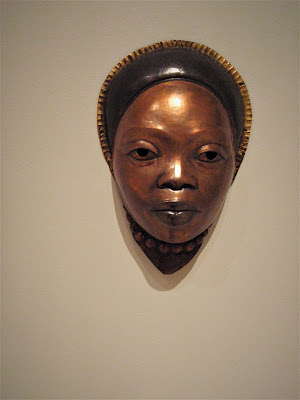 Mask (Negro Mother) by Sargent Johnson in the San Francisco Museum of Modern Art
Posted by Patrick J. Vaz at 6:00 AM No comments:

I'll start off with an addendum for March that I heard about too late for last month's listing: on 28 March at the Italian Cultural Institute on Van Ness Avenue in San Francisco, Ars Minerva's founder, the mezzo-soprano Céline Ricci, will join with mezzo-soprano Kindra Scharich, soprano Aurélie Veruni, and harpsichordist Derek Tam to explore women of the Mediterranean as personified in arias by Monteverdi, Cavalli, Pallavicino, Handel, Ziani, and Porta. Admission is free but a reservation is required; please note the start time is 6:30.

Theatrical
I mentioned this last month, but how many chances do you get to see Timon of Athens? Rob Melrose directs the Shakespearean rarity for Cutting Ball from 30 March to 29 April.

Berkeley Rep is reviving both parts of Tony Kushner's Angels in America: A Gay Fantasia on National Themes, directed by Tony Taccone, from 17 April to 22 July. They are offering some marathon days on which you can see both parts, or you can go on two separate days. As with the San Francisco Opera's upcoming Ring, the website does not allow its usual choose-your-own-seat option, so you might prefer to call the box office at 510-647-2949. That's what I did and the guy I spoke to was very helpful and found me excellent seats in about five minutes.

Shotgun Players has extended its run of Iron Shoes through 6 May, and they are kicking off this year's reading series with Hurricane Diane, a new play by Madeleine George, on 23 and 24 April.

ACT presents Suzan-Lori Parks's Father Comes Home from the Wars Parts I, II, III, directed by Liz Diamond, at the Geary Theater from 25 April to 20 May. The show is described as a version of the Odyssey set during the American Civil War, but the author is recommendation enough for me.

Scott Foglesong will give a talk on Conducting Wagner to the Wagner Society of Northern California on 7 April at the Jewish Community Center in San Francisco.

Cal Performances presents Apollo's Fire (the Cleveland Baroque Orchestra) in Monteverdi's L'Orfeo, led by the group's founder, conductor and harpsichordist Jeannette Sorrell, with tenor Karim Sulayman as Orfeo, soprano Erica Schuller as Euridice, and a reconstruction of the opera's original ending, in which Orfeo is torn apart by the Bacchae. You can experience the results in Zellerbach Hall on 20 April.

Orchestral
Cal Performances brings the Seattle Symphony to Zellerbach Hall for two programs, both conducted by Ludovic Morlot and featuring music by John Luther Adams: on 7 April you can hear the California premiere of Become Desert (featuring awesome local choir Volti, led by Robert Geary) along with the Sibelius 2, and on 8 April you can hear Become Ocean along with Sibelius's The Oceanides and Britten's Four Sea Interludes from Peter Grimes.

At the San Francisco Symphony, Daniel Harding conducts the Beethoven Piano Concerto 3 (with soloist Paul Lewis) and Richard Strauss's An Alpine Symphony on 12 - 14 April; Yan Pascal Tortelier leads a Ravel / Debussy program (with mezzo-soprano Susan Graham as the soloist in Ravel's Shéhérazade) on 19 - 21 April; and Christian Reif conducts Siegfried's Rhine Journey by Wagner, the Liszt Piano Concerto 2 with soloist Jean-Efflam Bavouzet, and Holst's The Planets on 26 - 27 and 29 April.

San Francisco Performances presents tenor Nicholas Phan in two different programs (both in Herbst Theater) exploring the songs of Belle Époque Paris: on 7 April (matinee) he is joined by the Alexander String Quartet, soprano Rhoslyn Jones, mezzo-soprano Renée Rapier, and pianist Robert Molicone in settings of Paul Verlaine by Debussy and Fauré, with music historian Robert Greenberg discussing the larger cultural context of the songs; and on 12 April he is joined by pianist Myra Huang to perform songs by Reynaldo Hahn, Lili Boulanger, Debussy, Fauré, and Satie.

Jeffrey Thomas leads the American Bach Soloists in Monteverdi's Vespro della Beate Vergine (Vespers of 1610) and Gabrieli's In ecclesiis and Magnificat à 14 on 6 April at St Stephen's in Belvedere, 7 April at First Congregational in Berkeley, 8 April at St Mark's Lutheran in San Francisco, and 9 April at Davis Community Church in Davis.

Cal Performances presents the Tallis Scholars on 19 April at the Cathedral of Christ the Light in Oakland; although the program is a commemoration of those who died during the First World War, it is mostly drawn from the group's usual repertory of sixteenth- and seventeenth-century works, by composers including Josquin, Guerrero, Mouton, Palestrina, Victoria.

Paul Flight leads the California Bach Society in choral works written in Rome by Handel – Nisi Dominus, Laudate Pueri Dominum, and Dixit Dominus; performances are on 20 April at St Mark's Lutheran in San Francisco, 21 April at All Saints' Episcopal in Palo Alto, and 22 April at First Congregational in Berkeley.

Bard Music West returns to the Noe Valley Ministry in San Francisco on 6 - 7 April, this time with composer Henry Cowell and his world as the center of attention for a series of concerts and talks.

Ensemble for These Times presents Once/Memory/Night: Paul Celan, featuring commissions (I assume settings of Celan's poetry) by David Garner, Jared Redmond, and Stephen Eddins, as well as works by Libby Larsen and Aleksandra Kaca, on 15 April at the Noe Valley Ministry.

This year, the Other Minds Festival, which will run from 9 to 14 April at the ODC Theater in San Francisco, will concentrate on "text-sound compositional work utilizing 'speech' as a musical medium – text, isolated phonemes, and other vocal utterances as sound material and structural elements. Much of this repertoire involves aspects of electronic manipulation in live performance." The festival will include works by Amy X Neuberg, Pamela Z, Clark Coolidge, Alvin Curran, Anne Waldman, Brion Gysin, Sheila Davies Sumner, and Mark Applebaum, as well as works by Ernst Toch (the complete Gesprochene Musik, including two rediscovered movements), Kurt Schwitters (Ursonate), and the Virgil Thomson / Gertrude Stein Capital Capitals.

And as always check the full schedule of the Center for New Music as it is frequently updated. Some things that catch my eye for April: guitarist Aaron Larget-Caplan playing music by Bach, Cage, and Vineet Shende on 7 April; Noam Bierstone playing piano, Tibetan bowls, and himself on 11 April; soprano Jill Morgan Brenner in the third of her concerts exploring poetry and new music, on 13 April; the Long Tone Choir on 15 April; Ladies Who Lieder on 19 April; and cellist Ashley Bathgate and pianist Lisa Moore on 21 April.

Choral
The Oakland Symphony Chorus, led by Lynne Morrow, will hold its Spring Concert on 14 April at the Cathedral of Christ the Light in Oakland. The program will include African-American spirituals in arrangements by Moses Hogan, Jester Hairston, William Dawson, and Alice Parker; works by Italian composers including Palestrina, Alessandro Scarlatti, and Rossini; and works by Stravinsky and Bruckner.

Cal Performances presents the Armenian State Chamber Choir at First Congregational on 14 April; the choir will perform works by Alfred Schnittke as well as traditional Armenian folk tunes and music ranging from the eighteenth century to our time by Komitas, Nova, and Halajian.

The San Francisco Girls Chorus, led by Valérie Sainte-Agathe, will be at the Yerba Buena Center on 22 April to perform works featured on their new CD, Final Answer, by André Caplet, Lisa Bielawa, Carla Kihlstedt, Aleksandra Vrebalov, and Philip Glass, along with the world premiere of the chamber version of If I Were Not Me, for which they will be joined by composer / violinist Colin Jacobsen.

San Francisco Performances presents the Takács Quartet in a program of Mozart, Dohnány, and Mendelssohn at Herbst Theater on 18 April.

Old First Concerts presents the Quinteto Latino, which is dedicated to music by Latino composers, in a program of works by Carlos Chávez, Liduino Pitombeira, and Júlio Medaglia, on 27 April.

San Francisco Performances and the San Francisco Symphony present pianist Sir András Schiff in two concerts at Davies Hall: on 15 April he plays Mendelssohn, Brahms, and Bach, and on 17 April more Brahms and Bach (different pieces from the earlier recital) as well as Schumann, Mozart, and Beethoven.

Dance
Alvin Ailey American Dance Theater makes its annual return to Cal Performances – in fact, this year is the half-century mark for this collaboration – with three different programs (though each contains the beloved classic Revelations) at Zellerbach Hall from 10 to 15 April.

The San Francisco Ballet presents the National Ballet of Canada in Nijinsky, choreographed by John Neumeier to music by Chopin, Schumann, Rimsky-Korsakov, and Shostakovich, from 3 to 8 April.

Visual Arts
You can see Fans of the Eighteenth Century at the de Young Museum from 31 March to 28 April (the exhibit is in conjunction with the Casanova show at the de Young's sister museum, the Legion of Honor).
Posted by Patrick J. Vaz at 9:00 PM No comments: 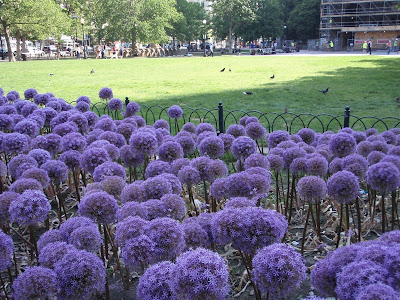 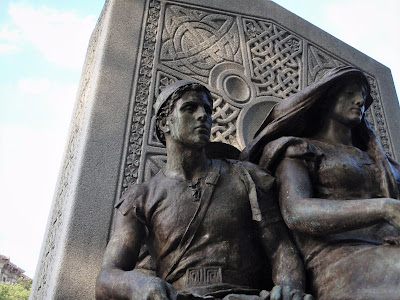 a couple of days late for St Patrick's Day, but this is a detail of the monument to John Boyle O'Reilly in the Fenway in Boston, from my trip last June
Posted by Patrick J. Vaz at 6:00 AM No comments: 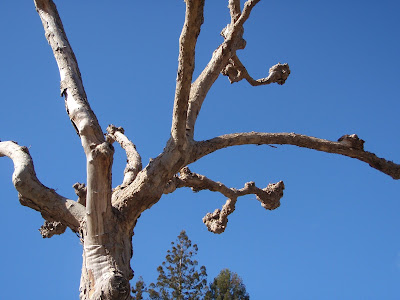 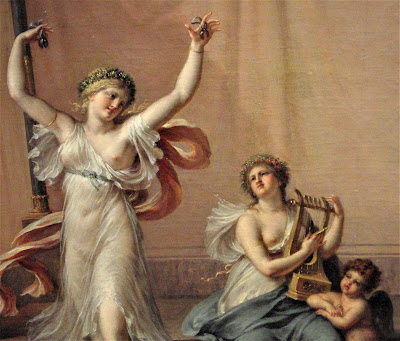 detail of Anacreon, Sappho, Eros, and a Female Dancer by Étienne de Lavallée-Poussin, in the Utah Museum of Fine Arts, Salt Lake City
Posted by Patrick J. Vaz at 6:00 AM No comments: 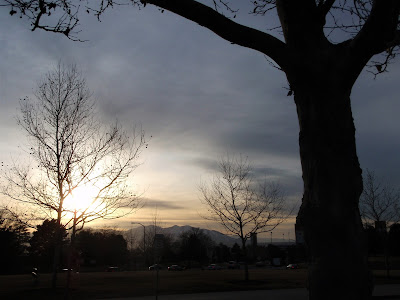 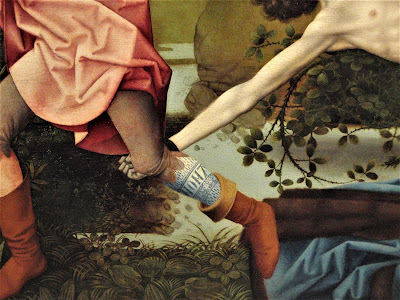 Another detail from last week's painting, the anonymous fifteenth century Flemish altarpiece The Martyrdom of Saint Hippolytus in the Museum of Fine Arts, Boston. Those are surprisingly jaunty stockings to wear on saint-torturing day.
Posted by Patrick J. Vaz at 6:00 AM No comments: 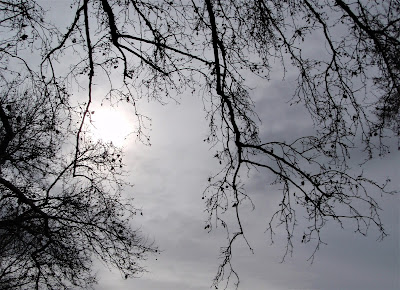