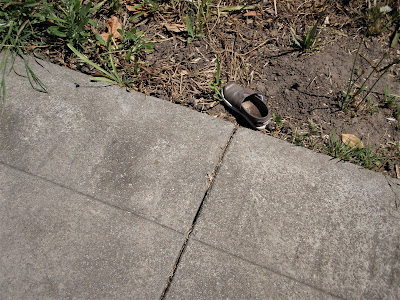 another lost shoe; San Leandro, California May 2017
Posted by Patrick J. Vaz at 6:00 AM No comments:

Traditionally a slower performance month, July still has a lot going on:

Theatrical
Shotgun Players presents the west coast premiere of White by James Ijames, directed by M Graham Smith, from 6 July to 5 August. And you can catch more James Ijames at Shotgun's Champagne Reading Series when they present Kill Move Paradise, directed by Darryl V Jones, on 30 and 31 July.

San Francisco Playhouse presents its annual summer musical starting 5 July through 8 September and this year it's Sondheim's Sunday in the Park with George.

The African-American Shakespeare Company presents Richard III, directed by Kirsten Brandt with L Peter Callender in the title role, from 14 to 29 July in the Taube Atrium Theater.

Operatic
The last notes of San Francisco Opera's 2017 - 2018 season will sound on 1 July as Götterdämmerung burns it all down, but the Opera's Merola Program for young artists will rise from the ashes, presenting staged scenes from Vanessa, Il tabarro, Don Giovanni, and Les pêcheurs de perles on 5 July at the San Francisco Conservatory of Music and on 7 July at Bing Concert Hall at Stanford. On 19 and 21 (matinee) July at the Conservatory the Merola program will present the first of this season's two operas: Mozart's Il Re Pastore (the second opera, The Rake's Progress, will arrive in early August).

Chamber Music
The Bridge Piano Quartet performs works by Mozart and Frank Bridge as well as the world premiere of Chad Cannon's Gateway: Stories from Angel Island on 1 July at Old First Concerts.

Modern / Contemporary Music
Huun-Huur-Tu play the Freight & Salvage Coffeehouse on 18 July. I'm not entirely sure what this is but the description makes it sound as if it's based in something so old and remote (music from isolated Siberian herdsmen) that it ends up being seriously avant-garde.

The SF Jazz Center presents a Philip Glass Fest from 19 to 22 July, with the composer himself performing (with harpist Lavinia Meijer and cellist Matt Haimovitz and then with pianists Anton Batagov, Jenny Lin, and Aaron Diehl).

Here's your monthly reminder to check out the Center for New Music's schedule often, as it changes more than once a month; some things that strike my eye in the current July listings are Larry Ochs, Aram Shelton, Scott Walton, and Kjell Nordesen improvising together on 11 July; The Sky Was Beyond Description for koto / bass koto by Hyo-shin Na performed by Shoko Hikage on 15 July; Hans Otte's The Book of Sounds performed by pianist D Riley Nicholson on 21 July; Robert Simonds performing works for unaccompanied violin (including several written for him) by American women composers (Missy Mazzoli, Cindy Cox, Patricia Van Ness, TJ Cole, Molly Joyce, Elizabeth Kennedy Bayer, and Alexis Bacon) on 27 July; and Steve Adams (woodwinds), Michael Vlatkovich (trombone), and Tom McNalley (guitar) improvising on 30 July.

On 13 July at Freight & Salvage Coffeehouse you can hear Korean Men featuring Korean folk singer Lee Heemoon and Korean jazz group Prelude; originally created for the National Theatre of Korea, the evening is a comic look at male and female roles.

Margaret Belton performs a tribute to Patsy Cline at the Freight & Salvage Coffeehouse in Berkeley on 15 July.

Marcia Ball takes the stage at the Freight & Salvage Coffeehouse in Berkeley on 27 July.

Choral
The Golden Gate International Choral Festival takes place on 11 July at Old First Concerts and features the Chamber Singers of the Fairfield County Children's Choir from Orange, Connecticut, and the St Stephen's College Choir from Hong Kong. This is a free concert and no tickets are required.

Jazz
The SF Jazz Center presents Dustbowl Revival and the Hot Club of Cowtown on 12 July.

Paris Combo comes to the SF Jazz Center from 26 to 29 July.

Dance
ODC/Dance presents two "summer sampler" programs: the first on 20 - 21 July and the second on 27 - 28 July; both are at the ODC Theater on 17th Street in San Francisco.

Cinematic
The Jewish Film Festival runs from 19 July to 5 August; the film that jumps out at me is the recently rediscovered and restored 1924 Austrian silent film The City Without Jews, a satirical look at an imaginary country that decides the way to revive its economy is by banishing the Jews, with disastrous results – a storyline that would of course become a real-life tragedy for millions just a few years later. The film is presented in partnership with the San Francisco Silent Film Festival and you can see it on 22 July at the Castro Theater with an original score performed live by Sascha Jacobsen and the Musical Art Quintet.
Posted by Patrick J. Vaz at 9:13 AM 7 comments: 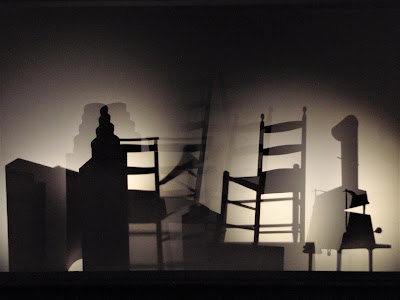 This is the back view of items made by the Shaker settlement in Mount Lebanon, New York, currently on display at the de Young Museum in San Francisco as part of the exhibit Cult of the Machine, which is running until 12 August.
Posted by Patrick J. Vaz at 6:00 AM No comments: 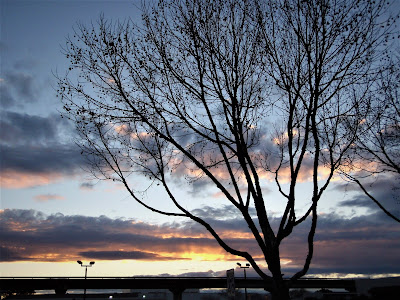 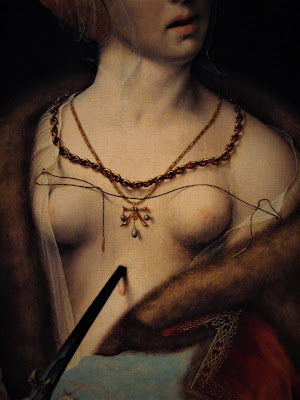 detail of Lucretia by Joos van Cleve in the Legion of Honor, San Francisco
Posted by Patrick J. Vaz at 6:00 AM No comments:

always the same, year after year

Nothing doing. Still an idea behind it.

He looked at the cattle, blurred in silver heat. Silvered powdered olivetrees. Quiet long days: pruning ripening. Olives are packed in jars, eh? I have a few left from Andrews. Molly spitting them out. Knows the taste of them now. Oranges in tissue paper packed in crates. Citrons too. Wonder is poor Citron still alive in Saint Kevin's parade. And Mastiansky with the old cither. Pleasant evenings we had then. Molly in Citron's basketchair. Nice to hold, cool waxen fruit, hold in the hand, lift it to the nostrils and smell the perfume. Like that, heavy sweet, wild perfume. Always the same, year after year. They fetched high prices too Moisel told me. Arbutus place: Pleasants street: pleasant old times. Must be without a flaw, he said. Coming all that way: Spain, Gibraltar, Mediterranean, the Levant. Crates lined up on the quayside at Jaffa, chap ticking them off in a book, navvies handling them in soiled dungarees. There's whatdoyoucallhim out of. How do you? Doesn't see. Chap you know just to salute bit of a bore. His back is like that Norwegian captain's. Wonder if I'll meet him today. Watering cart. To provoke the rain. On earth as it is in heaven.

No, not like that. A barren land, bare waste. Vulcanic lake, the dead sea: no fish, weedless, sunk deep in the earth. No wind would lift those waves, grey metal, poisonous foggy waters. Brimstone they called it raining down: the cities of the plain: Sodom, Gomorrah, Edom. All dead names. A dead sea in a dead land, grey and old. Old now. It bore the oldest, the first race. A bent hag crossed from Cassidy's clutching a noggin bottle by the neck. The oldest people. Wandered far away over all the earth, captivity to captivity, multiplying, dying, being born everywhere. It lay there now. Now it could bear no more. Dead: an old woman's: the grey sunken cunt of the world.

And a very happy Bloomsday once again to my mountain flowers
Posted by Patrick J. Vaz at 6:00 AM No comments: 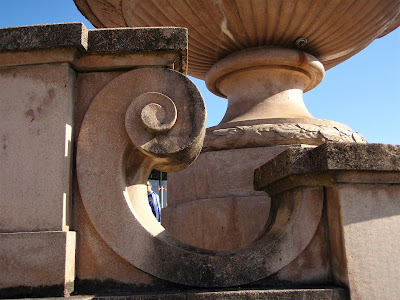 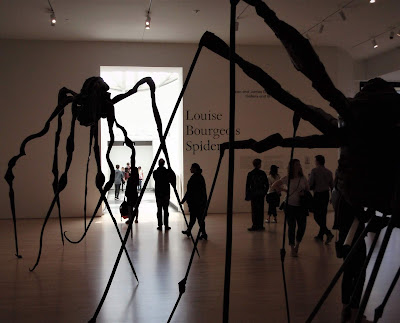 Spiders from Louise Bourgeois at the San Francisco Museum of Modern Art, May 2018
Posted by Patrick J. Vaz at 6:00 AM 2 comments: 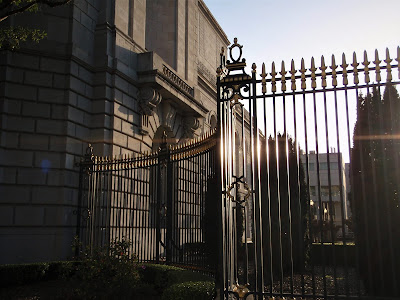 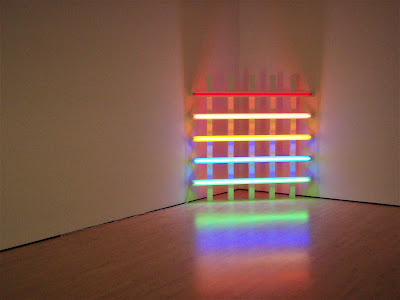 Dan Flavin, Untitled (in honor of Leo at the 30th anniversary of his gallery), in the San Francisco Museum of Modern Art; "Leo" is Leo Castelli
Posted by Patrick J. Vaz at 6:00 AM No comments: 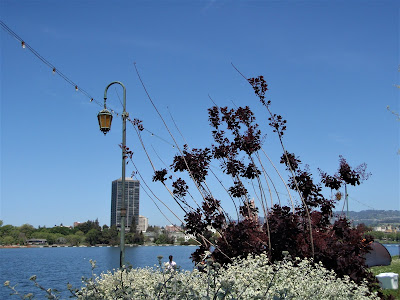