Growing tomatoes is how I get through the summer. I do not like the hot weather, and this past weekend there was a lot not to like. The light had a strange pale gray pall to it, an effect of the huge wildfires that are consuming other parts of this bone-dry state. As I've mentioned earlier, this has not been a really productive year for the tomatoes, and I think it must be because of the reduced watering, something I did not realize until too late – mid-August is in fact way too late. Usually this is the time of year when I start tapering off on the watering, keeping an eye out for plants that have maybe run their course and are ready for the compost bin.

There have been some tomatoes, of course. The watering wasn't reduced that much. Below are some that I picked last Wednesday. 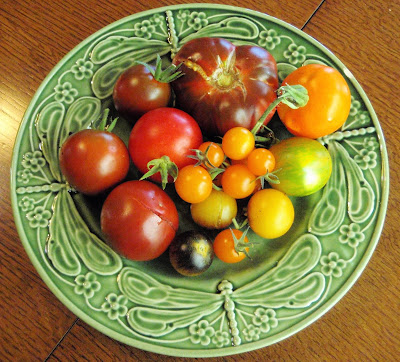 Below is another shot of Sungold, just because it looks pretty. 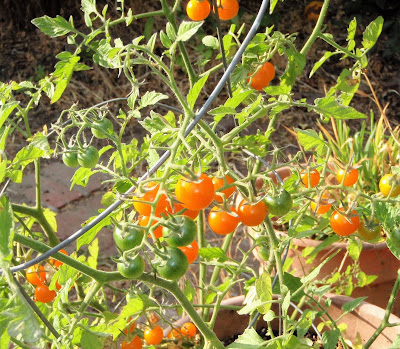 Cherokee Purple, looking exhausted by the recent heat, is carrying nineteen tomatoes, none of them ripe yet. 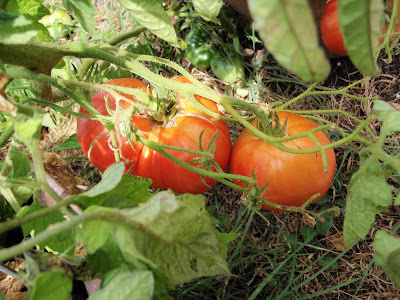 Michael Pollan had eighteen tomatoes on it, which is fewer than it used to have because at least one dropped off and I saw it lying by the roots of its neighbor, Cherokee Purple. 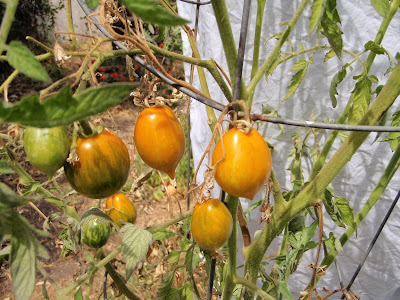 Actually, Michael Pollan now has about eight tomatoes on it because – yes! at long last! – some were ripe enough to eat. It's entirely coincidental that the two tomatoes I decided to track this season are the slowest of the bunch. 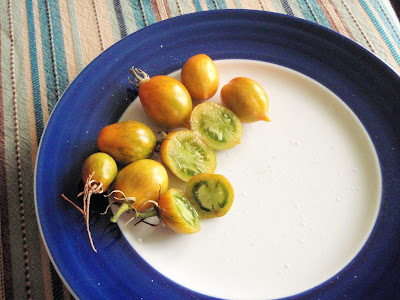 So here's the deal on Michael Pollan: pretty tasty! They have a mild flavor, with a slight tartness to them – a delicate pucker, as if you'd squeezed a few drops of lemon juice on them. Some of the skins were a bit thick, and some had kind of hard pithy areas on their tips; possibly both those things were, again, related to a lack of water. It's a very attractive tomato and would like nice sliced up in a summer salad, though I'm not a big salad-eater and usually just eat the tomatoes on their own, with a bit of salt. I used the fancy pink Himalayan salt on these, because fresh tomatoes are the reason to have fancy salt.

Summer is flying away, as summer does, and I'm always happy to see the autumn arrive, though sadly the past few years we've had many autumn heat waves. But there's a different feel to them; maybe it's that the temperature drops more at night so they seem somehow more tentative. Anyway the sun is setting earlier and the nighttime chorus of crickets now appears when it has set. The figs are ripening; a couple have even turned purple enough to look ripe. I tried one and it was definitely not ripe (and very dry: the drought, again). Another looked promising and I was going to give it another day in the sun and then try it, but as you can see below the birds beat me to it. Nonetheless I am glad to see a few birds back. 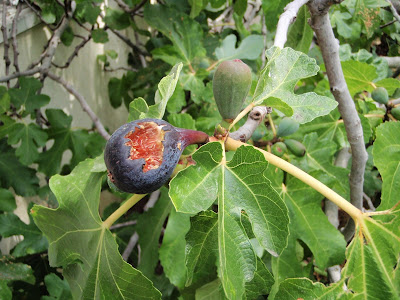