Just a brief update this week, as there is not much new to report – no cat sightings, no sudden ripeness; it's all just starting to slide towards the end. I didn't get out into the yard much this weekend because I felt sort of listless and my head hurt (possibly an early sign of my typical September allergies, arriving earlier than usual thanks to climate change). The obnoxious people living behind me had some kind of loud gathering on Sunday and I didn't feel like dealing with that either. 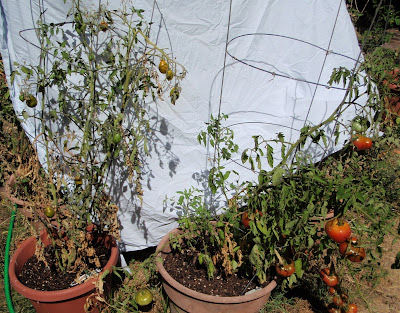 I've had a few more of the Michael Pollans (on the left above and in the two shots below). 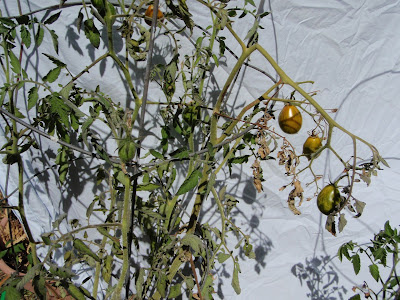 There are currently eleven fruits in various stages of ripeness hanging from its vines. Only one looks about ready to go. I ate the other ripe ones, as reported last week. I did share a couple as well. 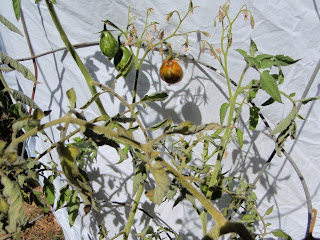 Cherokee Purple (on the right in the top photo, flopping to one side, and in the two below) now has seventeen fruits on it, all of them in various shades of red ripeness except for the one green one you can see in the bottom shot. It's been a long time coming, but it does look as if it will come through with a fair number of tomatoes for me. 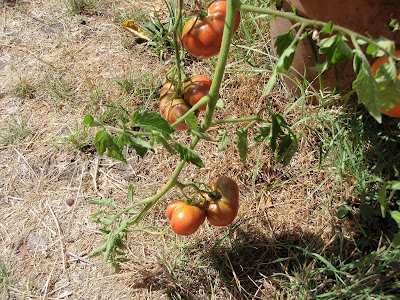 I did actually pick a few of those this evening (I'm writing this Monday night) but have not had a chance to try them. I got home much later than usual because the trains were snarled up for hours. I heard later that there was a suicide on the tracks. 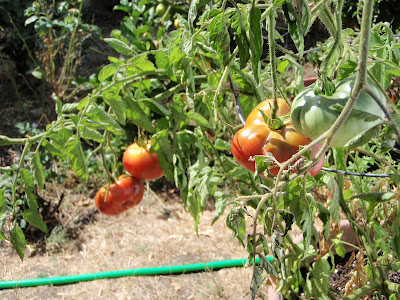 That seems to be happening more and more often. Take care of yourself, people. Be considerate of each other. Try to make the best of things.
Posted by Patrick J. Vaz at 5:30 AM