So let's run this week's numbers: both plants (Michael Pollan on the left and Cherokee Purple on the right) seem to have topped out at around 44 inches, and as you can see Cherokee Purple is starting to list dramatically to the right. 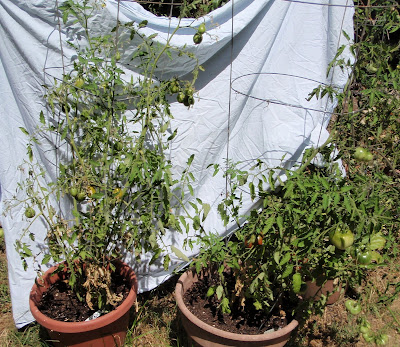 This is probably because the weight of the fruit is starting to pull the vines down. There are currently eighteen tomatoes in various stages of ripeness on this plant, and they are fairly large (which, historically, if I may use that word about my tomato-growing, do not do as well in my garden, probably because San Leandro is close to the water and therefore cooler and foggier than other East Bay towns – also I have a lot of trees in the yard). 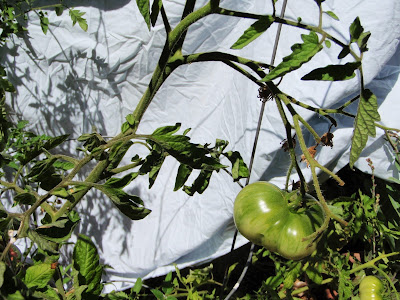 Below, on top, is the first Cherokee Purple tomato to show up, which I've been tracking each week. It's still four inches across, so I think that will be its final size. Last week we saw its first blush of pale red, and as you can see, this week the ripening has progressed significantly. The smaller tomato next to it, which was still green last week, also now is mostly reddish. Edibility approaches! 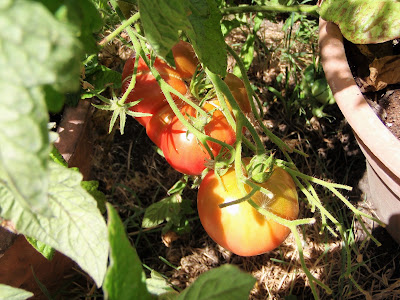 As you can see below, Michael Pollan, which now has twenty-one fruits in various stages, has a few that might be approaching ripeness. Since this is a new tomato I'm not entirely sure what it's going to look like when ripe, but the increasingly yellow hue of the ones below looks promising. I think it's going to be one of those tomatoes like Green Zebra that are yellowish with green streaks. If you look to the left and the bottom of the picture you can see (though they're partially obscured by leaves) the deeper green of the unripe fruit. 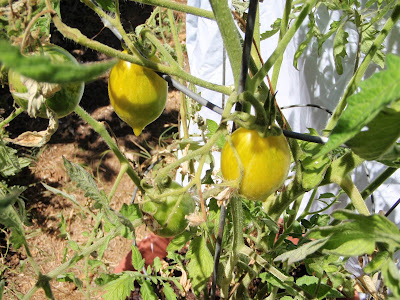 And the plant is still flowering. . . 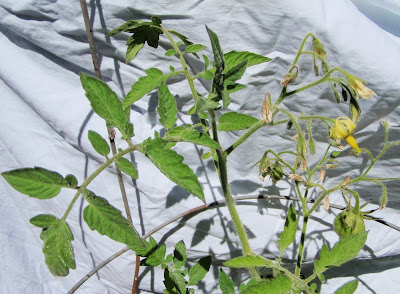 . . . though at its base leaves are already starting to wilt. This is probably due to the drought and the reduction in the amount of water I've been giving them, but it still feels as if we're starting the downward slide earlier than usual. 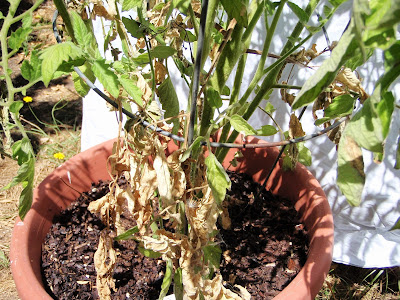 For instance, leaves on the various trees seem to have started turning already. I usually start noticing this in late August/early September, but even now, the very beginning of August, I'm seeing many leaves curling and yellowing. I'm not sure how well you can see it in the photo below (I think if you click the photo it will enlarge it, which will help) but the leaves of this tree (beech or birch, I can never remember which it is) are already mottled with yellow and brown streaks and spots. 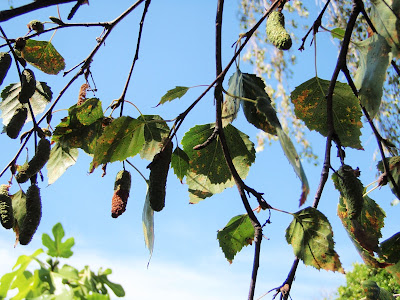 Usually by this time of the year I have a fair number of tomatoes. So far, not so much. I'm still at the "eating a few off the vine" stage, as opposed to the "look at this bowlful of beautiful tomatoes, how can I eat them all" stage. Not that I'm complaining about eating them right off the vine; you can't beat eating a ripe tomato still warm from the sun.

Below is another view of the heirloom lettuce gone to seed, which I find fascinating and visually appealing. The stalks are topped with small yellow flowers, which seem to open in the morning and close during the day. I'd keep an eye out for this, but I'm usually at work in the morning and therefore miss the daily miracles and mechanics. 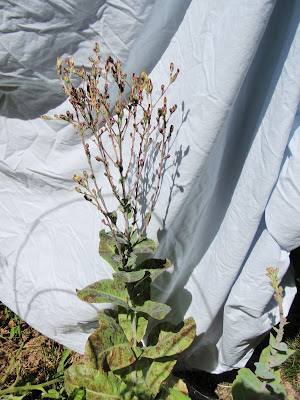 Some random roses: below is another shot of Our Lady of Guadalupe, which I've shown before. 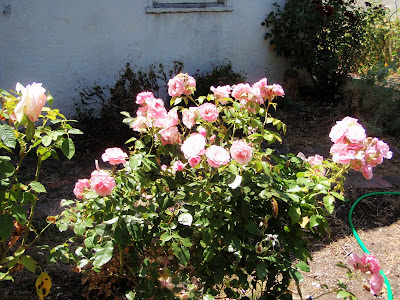 And below is Ebbtide, which has beautiful flowers but seems oddly stunted; I doubt the plant is even a foot high – OK, I went out and measured it; it's just over a foot. The hose keeps getting caught on it. 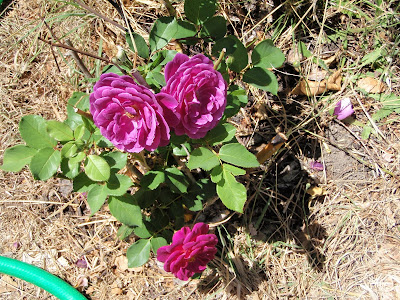 By contrast, the rose below, Fragrant Plum, is usually over six feet, though this year (again: the drought) it is much shorter. I like the name, which makes this plant seem like a courtesan in a Chinese novel like The Dream of the Red Chamber. 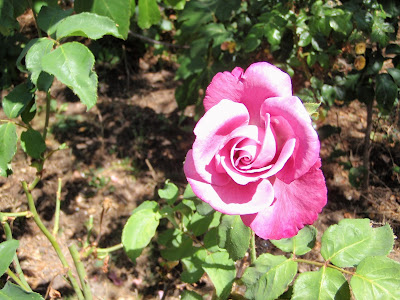 I was out watering Sunday morning and glanced under the fig tree for the cat, since he was there last week, but he wasn't there. Then I noticed he was lying by the birdbath.

As you can see, that camouflage thing really works. 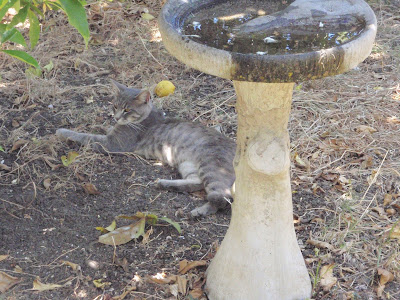 He turned to stare at me but did not feel the need to run off this time. We all run down as the hot summer days drag on, I guess. 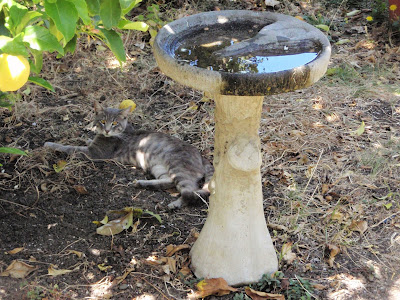 Most of the nasturtiums, which are so bright and attractive (and so easy to grow), have withered into tangles of ghostly pale vines, adding to the dead look of a California garden in the summer, but there are still a few patches of them. The one below is probably doing all right because it's close enough to a rose that receives fairly regular watering. To its left you can see a Columbine. I love them but they haven't done very well this year, and I think that is definitely due to the lack of water. 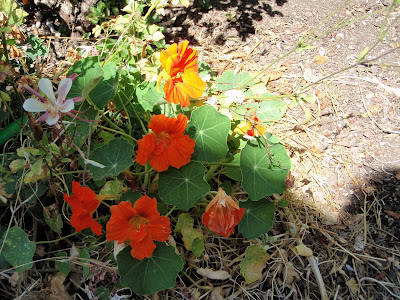 And a final shot for this week of the lavender bending towards the afternoon sun. 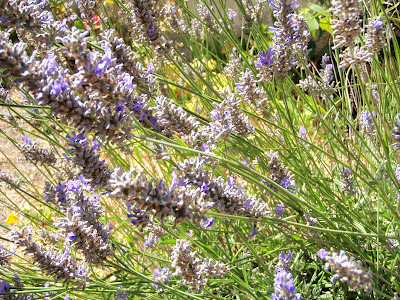 Lovely, and enjoyed the segue from tomatoes to roses via wilting heirloom lettuce gone to seed. Also glad to see the photo of the pretty cat staring back and sizing you up without fear.