Let's start off with the cat update: midway through last week I went out to water, and Lovely Cat was sunning himself on the patch of dead lawn outside the door. Once again when I appeared on the scene he moved away. It was a slower movement than the usual bolt, but still he moved away, so I assumed he was still unable to accept that I would not harm or even approach him, and frankly I no longer really cared much, since there's only so much emotional energy I'm going to put into a wandering cat and if he wants to interrupt his sunning to run away from me, then so be it. 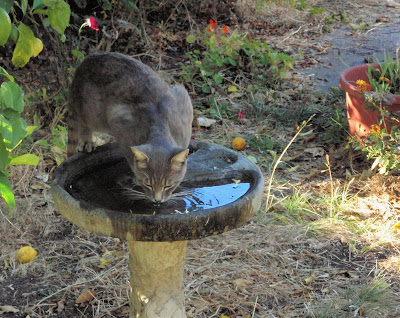 But then I realized that what he had done was move off to the side of the yard, a bit behind the birdbath: so presumably he had come to realize that when I entered the yard the birdbath would soon be full and he could have his drink, which he graciously did while I took a number of pictures, two of which you can see here. I used the zoom feature since he is still skittish and I didn't want to get too close. I can take a hint if it's repeated often enough. 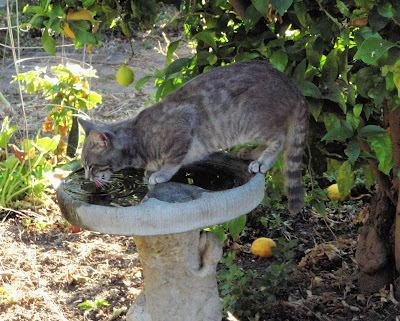 The cat is quite beautiful but I would be happy if I still saw the birds I used to see. A year or two ago there were five mourning doves that would hang out back there, and some beautiful bluebirds. Where are they now? The squirrels seem to be gone too, but I don't miss them very much.

Below is a random rose: this is Moonstone, which I bought because Wilkie Collins. It was one of the first roses I bought but though it has grown fairly large it has never seemed quite healthy. The flowers would usually droop in an odd way. The stems looked sturdy enough to hold the blooms, but they had a weird crookneck thing going on. Sometimes you just get a plant that turns out oddly. My sister across town had the same rose and hers never drooped the way mine did. Anyway this one had its head held high so I took its picture. You can see it's a gorgeous flower when it behaves, with pale petals trimmed with delicate pink. 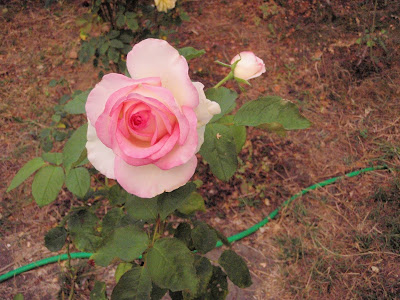 Below is St Patrick, which I've shown here before. These particular blooms oddly lacked their usual greenish tinge on the petals, which is where the rose gets its name (because green equals Ireland and Ireland equals St Patrick). The red-and-white rose you can see through St Patrick's leaves is Betty Boop, keeping company with the saint. 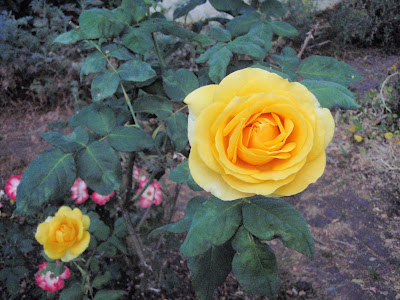 On to the tomatoes. This week I thought I would forego the double shot, since the plants look pretty much as they have the last few weeks, except Cherokee Purple is drooping even more to the right and both are looking thinned out.

Below are some of the fruits of Michael Pollan, approaching edibility. I'm hoping by next week some of these will be at last ripe enough to eat. What you're seeing here is the side that gets the most sunlight, so it looks riper than the backs, which are still a bit greenish. 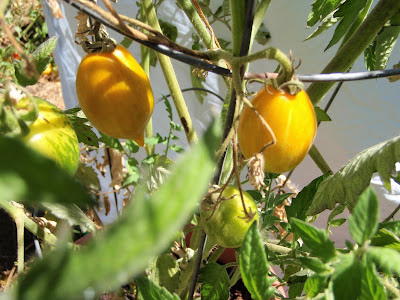 This week I counted nineteen fruits on Michael Pollan, which is fewer than I said were there last week. I've counted several times and still get nineteen, so last week either I miscounted (at least twice, since that's my minimum count), or a couple of tomatoes dropped off, either eaten by something or possibly just lost due to drought stress. Since the ripest fruits are all still there, I'm thinking maybe they weren't eaten; on the other hand, I didn't notice any fruits on the ground (not that I looked that closely) so perhaps I just miscounted. This is the kind of real-world activity that makes me realize that what scientists do is actually very tricky and somewhat subjective. 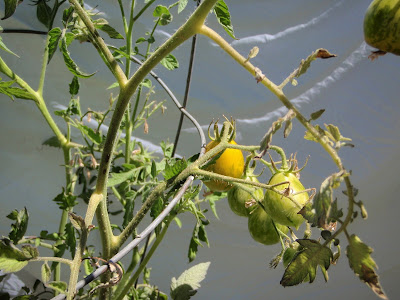 Earlier in the season I had thought that the plants were doing well with less water, but now, as I am realizing that I usually have many more tomatoes at this time of year, I'm thinking that the reduced water has led to reduced fruit output. Other than that the set-up is as it has been in previous years: the same sort of compost in the pots, the same locations, and this year maybe even more sun and heat, because that's what the weather has been like. 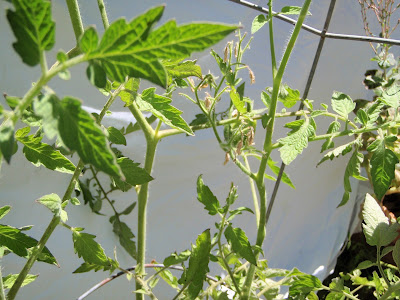 Below are some close-ups of the heirloom lettuce gone to seed. I love the wrinkled sheet behind them. It started out as a practical way of making the plants more visible in photographs, but I enjoy it on its own now: the folds catch the light like a convoluted cloak slipping off some ecstatic Baroque saint. I have resisted the temptation to leave it up all the time so that I could watch the changing light and shadow on it.

Anyway you can see the little yellow flowers that top the lettuce stalks. 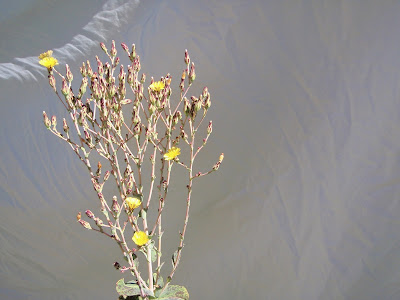 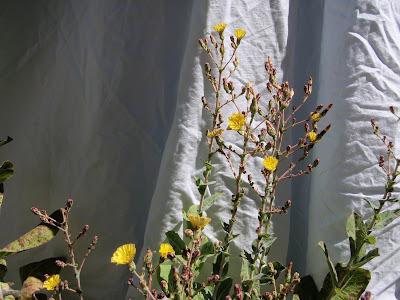 And here is Cherokee Purple. Nineteen fruits this week, and I hope that this plant, too, will have some tomatoes ready to eat in the coming week.

You can see in the photo above that the shoulders of the fruit are orangey-yellow, whereas in the less-ripe specimen below they are still green. 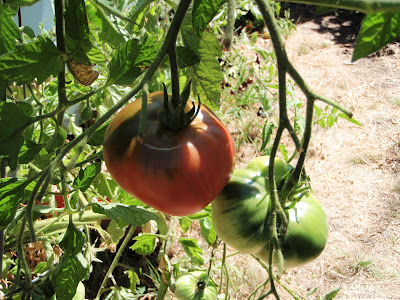 Below is a shoot of Sungold, which is not an heirloom tomato but which is tasty anyway, though I do have to say that this summer it does not seem as deliciously sweet as it has in previous years. This particular shoot has splayed out on its own, ignoring the helpful wire cage meant to lend it support. 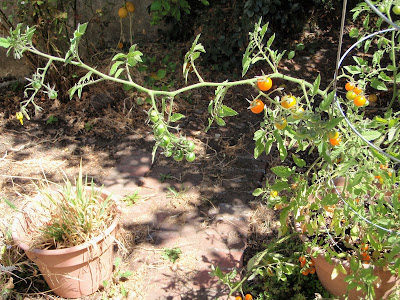 Below is one of the little white butterflies that I see frequently. They have pale gray markings on their inner wings and sometimes flutter around in pairs. It's perched on a nasturtium leaf. 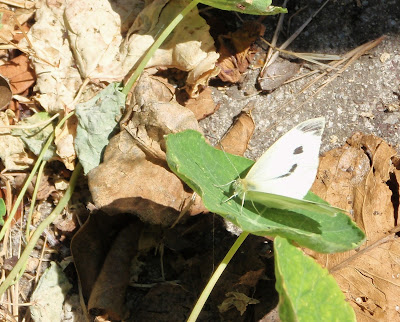 The neighbor's berry plants extend over the back wall. The berries are pretty tasty. I suspect birds get many of them, which would be why smaller berry plants tend to sprout up in odd places in my yard. 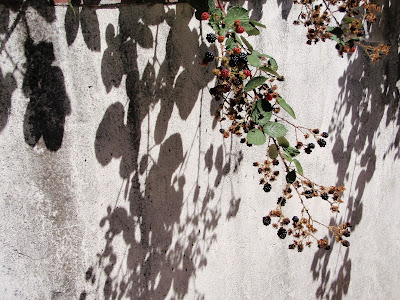