the BART warning
Here's this month's update on BART service interruptions (planned ones, that is; I don't claim any foreknowledge of the other kind). Tracks leading to the Transbay Tube need to be replaced, so over the Labor Day weekend (5 - 7 September) the West Oakland station will be closed and there will be no transbay service. There will be some buses from the 19th Street Oakland Station to the Transbay Terminal in San Francisco, but BART is basically hoping people will stay on whichever side of the bay they find themselves on after end of service on Friday. Trains will be running in San Francisco and in the East Bay; you just won't be able to take them from one to the other. Road traffic will no doubt increase considerably, especially since it's a long weekend. Check here for official updates.

And here's a little bonus August reminder, since I'm posting this before the end of the month: you can still get to the 29 August season opening concert for Curious Flights, featuring a lot of interesting music and many excellent performers, which you can read about here.

Theatrical
At Shotgun Players, Sarah Ruhl's Eurydice continues through 20 September. And as part of its Champagne Reading Series, Shotgun is presenting Letters from Cuba by Maria Irene Fornes, for two nights only, 21 - 22 September.

Berkeley Rep has the world premiere of a new musical based on the French film Amélie, with music by Daniel Messé, lyrics by Nathan Tysen and Daniel Messé, and book by Craig Lucas; that's 28 August to 4 October.

This season Custom Made Theatre is moving to 533 Sutter Street (at Powell, and easily accessible by a short walk up Union Square from the Powell Street BART station) and they are opening with Kenneth Lonergan's This Is Our Youth, running from 18 September to 17 October.

Modern/New Music
Stuff gets added to the Center for New Music schedule at odd times, so it's worth checking out their calendar more than once a month. There's a concert on 12 September that looks particularly interesting: I Sing Words: The Poetry Project, in which soprano Jill Morgan Brenner and pianist Anne Rainwater premiere art song collaborations between composer/poet teams (Danny Clay & Heather Christie, Joseph M. Colombo & J A Nowak, Kyle Hovatter & Matthew Zapruder, and Emma Logan & Chelsea Martin). I haven't heard the work of these artists, except for Kyle Hovatter, whose music I have enjoyed before.

Operatic
San Francisco Opera opens its fall season with two exciting shows: Verdi's Luisa Miller with rising young stars Leah Crocetto and Michael Fabiano and Sondheim's Sweeney Todd with Brian Mulligan, Stephanie Blythe, Elizabeth Futral, and Heidi Stober. I love Sweeney Todd so much that for many years it completely overshadowed for me everything else Sondheim has done in his long and brilliant career. It is one of the great American works for music-theater and I am thrilled to see it on the Opera House schedule. I only wish they had made it the opening night opera; it would be amusing to see if anyone in that particular audience got that they were being attacked. The dubious distinction of being wasted on the opening night audience goes instead to Luisa Miller; that's on 11 September so be forewarned. The other dates for Luisa are 16, 19, 22, 25, and 27 (matinee) September. The Sondheim is playing 12, 15, 18, 20 (matinee), 23, 26, and 29 September.

Also check out New Century Chamber Orchestra under Orchestral for a concert featuring the Letter Scene from Eugene Onegin.

Orchestral
New Century Chamber Orchestra kicks off its season with a program called Letters from Russia which includes the Letter Scene from Tchaikovsky's Eugene Onegin and Rachmaninoff's Vocalise, both sung by Ailyn Pérez, as well as works by Shostakovich, Pärt, and Jennifer Higdon, who is this season's featured composer. There is an open rehearsal the morning of 16 September and performances on 17 (Berkeley), 18 (Palo Alto), 19 (San Francisco), and 20 (San Rafael) September.

The California Symphony has a fun theme for its season opening concert: Passport to the World. Music Director Donato Cabrera leads the group in pieces by Gliere, Dvořák, Vaughan Williams, Elgar, Falla, Debussy, Sibelius, and Grieg. That's in Walnut Creek on 20 September at 4:00.

Cal Performances presents Gustavo Dudamel leading the Simón Bolívar Symphony Orchestra of Venezuela in two Beethoven concerts: Symphonies 7 & 8 and the Egmont Overture on 24 September in Zellerbach Hall and the 9th on 25 September at the Greek Theater. The Zellerbach concert is almost sold out, but there seem to be a few seats available on-line – honestly, it looks close enough to sold out so that I almost didn't list it (why list something people can't buy a ticket to?) but just in case here are their "sold-out performance" procedures. There seem to be a fair number of seats still available for the Greek Theater concert. In addition to the concerts, there are some talks, films, master classes, and a symposium associated with the Orchestra's residency; you may check out the schedule for that here.

Visual Arts
J M W Turner: Painting Set Free is at the de Young Museum until 20 September, and it is not to be missed. The museum is out in Golden Gate Park, so depending on where you live it might be a bit of a schlep, but it's worth it for this show. It's unfortunate that the de Young does not have late night hours during the work week – OK, technically, that is not true; they are open late Fridays, but they turn the place into a wanna-be bar with very loud boring and annoying music, so if you want to look at art – which I would think would be the main reason for going to an art museum – you'll want to avoid the irritation and disappointment of dealing with their Friday nonsense. 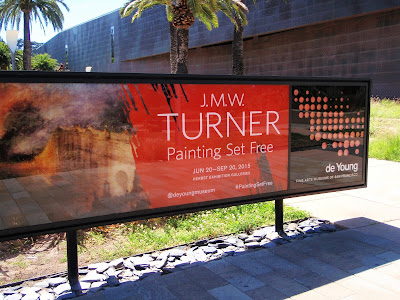