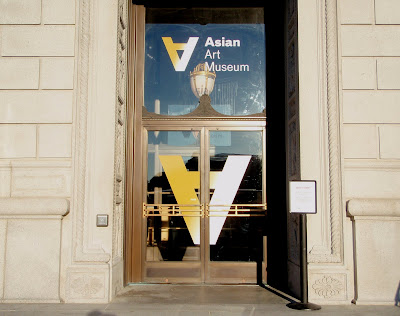 The large upside-down A is the museum's eminently mockable new logo. It symbolizes plunging attendance or something.

A while ago I made an attempt to see the new exhibit at the Asian Art Museum, Maharajah: The Splendor of India's Royal Courts. It was a Thursday night, before a concert, and it was the last Thursday of the year with late hours at the Asian, so it should have been perfect, except it wasn't because it was one of the museum's occasional stupid party nights. Sometimes those are easily ignored, but their website description of this one prominently mentioned a DJ, which should have been warning enough, but denial is, as they say, not just a river in Egypt. 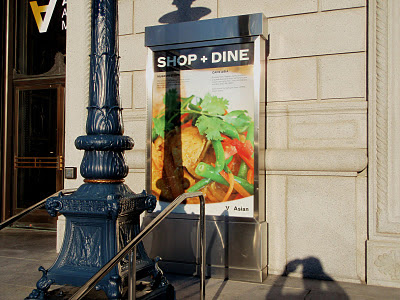 They do have a nice cafeteria and an elegant gift shop. And there I am in the lower right-hand corner.

It was the nightmare I could have predicted if I had been realistic. By the time I realized how bad it would be it was too late to do anything else, but too early to go sit in the lobby of Herbst Theater. Getting into the museum took even longer than usual. The lobby was packed with people standing in very long lines for something – food or alcohol, I think – and walking anywhere required maneuvering around the immobile masses. Art didn’t seem to be on anyone’s mind. I went into the cafeteria (no line) and I ate my Indian-themed dinner to the brain-dead thump-thump-thump the DJ was inflicting on us. 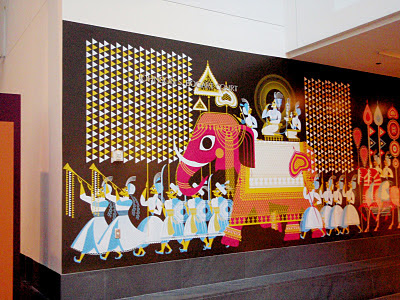 This delightful picture across a lobby wall is promoting another new exhibit I haven't seen yet, Deities, Demons, and Dudes with 'Staches, featuring the attractively stylized and colorful work of Sanjay Patel, an artist at the Royal Court of Pixar.

I tried to see the new exhibit. Those rooms weren't as jammed as the lobby, but each object had one to three people listening to the audio tour planted in front of it, and since many of the pieces seemed to be fairly small and elaborately detailed paintings, it was going to be impossible to see anything, and besides the brain-dead thump-thump-thump was loud and unending. So here is what I managed to gather in a quick look: lots of gold, lots of silver, several small jewel-like paintings. 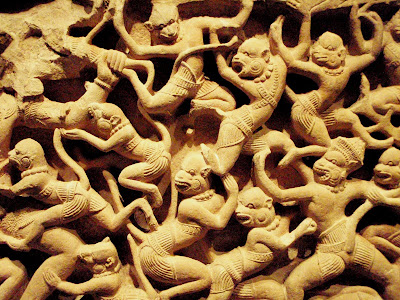 This bas-relief is from the permanent collection: the great Monkey King is bringing his troops to someone's aid (not mine). 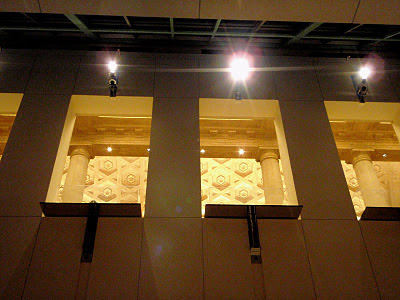 I finally couldn’t take it any longer and fled into the night, wondering if I should bother to renew my membership in the Asian Art Museum. Since I work, the Thursday evening hours are the best time for me to visit. It's a great place to go before a Thursday night concert in Civic Center. But they don't have the late hours in November and December, which are prime concert months. And about once a month they take over Thursday evenings with one of these events. And here’s the thing: if I wanted to listen to shit music amplified to a deafening volume, with my path steadily blocked by oblivious assholes nursing their grossly overpriced trendoid drinks while ignoring me and trying to pick each other up, then I would just go to a bar. And there are dozens of such places. As far as I know, there is only one place in the vicinity where you can go to look at Asian art. Why would an organization ignore its unique advantage and try to become a more expensive and inconvenient version of what is easily available in a dozen other places?
Posted by Patrick J. Vaz at 8:27 PM

Did we run into each other briefly that evening by accident and go look at ancient Korean ceramics or was that just a nightmare I had?

We did run into each other briefly, and it was indeed all very dreamlike. You did suggest going to look at the ancient Korean ceramics, but I needed to eat dinner first so you wisely fled into the night. The wretched music would have ruined the pottery-gazing anyway.

If you wrote the comments under photos in textbooks, reading would be a lot more fun.

You do remember that I actually could have taken that path? But I suspect my photo captions would have been, uh, heavily edited.