Old First Concerts offers a reliably interesting and entertaining line-up, and their $17 ticket price is one of the best arts bargains around; unfortunately for me, their concerts are almost always at 8:00 on Friday nights, which I’ve decided is possibly the worst time for performances. After a draining and tedious work week, generally the last thing I want to do with my exhaustion is carry it around aimlessly, wasting three-plus hours before a show even starts. One side effect of the ongoing Internetification of the World is the disappearance of many of the book or record stores where I used to be able to while away the hours in a more or less pleasing way. At least on Thursday nights some of the museums are open. There are simply not many places for me to go and not much for me to do now that won’t leave me feeling bored, irritated, and conscious of wasting time I could have spent better, and that's no way to walk into a concert. 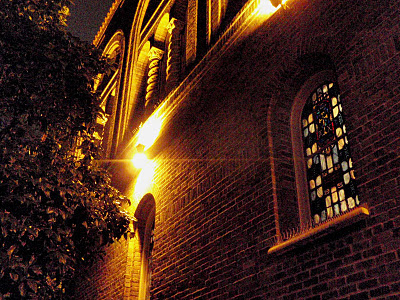 Anyway, I did go up to Old First Church a couple of Fridays ago for the return of Euouae. I hadn’t walked up Van Ness that far (up to Sacramento Street) in a while, I guess, because I was surprised at the number of boarded-up businesses and restaurants I saw, some of them places that had been there for years. I was kind of tired but a better kind of tired than usual, since I had taken time off work and was wearing myself out in more interesting places. 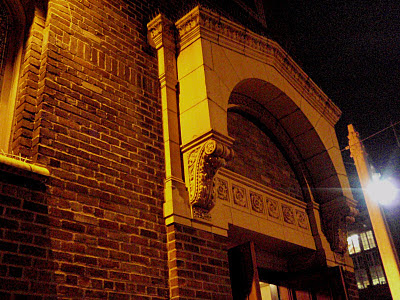 Euouae made its maiden voyage at an earlier concert at Old First, which I wrote about here. This time director Steven Sven Olbash presented Jacob Obrecht’s Missa Sub tuum praesidium, interspersed with pieces by Josquin Des Prez and Perotin, as well as St Gall and Messine chants, the whole creating a service in honor of the Virgin Mary. In practical, sitting-in-the-audience terms, what this combination does is vary the texture of the music enough so that you can sit there for the duration (about 70 minutes or so) and not feel hypnotized by the lack of variety.

Euouae’s founding belief is that “music, being made of sound, cannot be written down.” Olbash also says (this information is coming from the program book, though you can also check out Euouae’s official website for more information) that they use rehearsal techniques employed before the tenth century. I don’t know what those techniques are, but then I’m not a choral singer and don’t know what current rehearsal techniques are either. Obviously something not written down is simply going to be lost unless interpretive traditions and techniques are handed down with an unchanged understanding, which requires what we have never had, a stable and uniform culture in which singers and audience share common assumptions. So I think what Olbash is getting at here is that they are trying to create or re-create the music, or a music, anew – that whatever antiquarian research lies behind the performance, the most important authenticity is of style and spirit. In short, the letter kills but the spirit gives life. 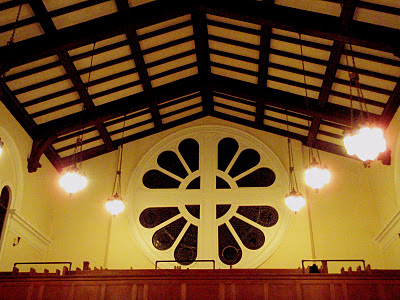 I decided early on in the performance not to keep checking the order of pieces in the program or the translations (though of course it's easy enough to keep track of the parts belonging to the Mass) or to ponder koan-like theories, and just to abandon myself to the aural experience. Let me commend myself for my wisdom in doing so! Olbash started the performance with very brief remarks, saying that he had been criticized at their first concert for talking too much from the stage ( I think I was one of those who said that – it does sound like something I would say), and then he didn’t speak again until the end, so let me commend him for that. At the close of the concert he offered us an unplanned encore of the Agnus Dei, since with rather endearing goofiness he hadn’t noticed that one of the singers wasn’t on stage. So they did it again with the correct number of participants. It reminded me of counting players on the field in football. 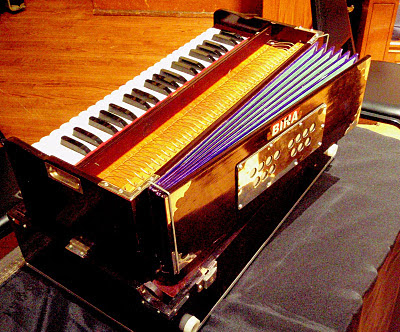 Theories and rehearsal techniques may shape the final product but of course are of more importance to the performers than to the audience, which simply gets the results. I found the results as enjoyable as in the first concert; the singers* blend beautifully but with enough individual piquancy to keep the music from sounding too processed or homogenized. There was a strange bandoneon-type instrument (it had a keyboard, so perhaps it was some type of small portable organ) that provided an eerie meditative droning to accompany some of the pieces. There is just something about this sort of chant that brings you into a different world, which of course is what the ancient chanters had in mind all along. It’s penetratingly persuasive, no matter what your reason for sitting in the church and listening.

Nice pics of Old First. The place has good vibes and good acoustics. You might want to consider the Sunday at 4 PM concerts instead of the Friday evening ones. The selection of performers is just as good.

The thing about the Sunday at 4 concerts: I think they just don't have as many; Friday at 8 seems to be their usual thing. That's my impression from checking the schedule regularly for the past year or so. Also, I'm often already booked for a concert on Sunday afternoons.