The Reading (pronounced "redding," I am told) Terminal Market is near City Hall, on the lower level of what had been the Reading Railroad's train shed, built in 1891. 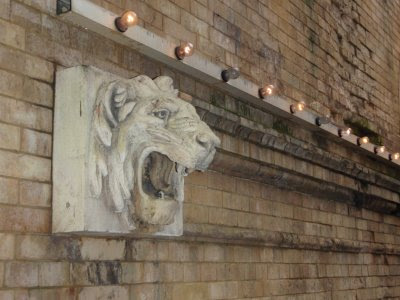 It's a large concourse filled with different booths offering food (some raw or uncooked and some prepared) as well as local crafts and items aimed at travelers. It's crammed full of signs, both neon and painted, and counters and little kitchens. 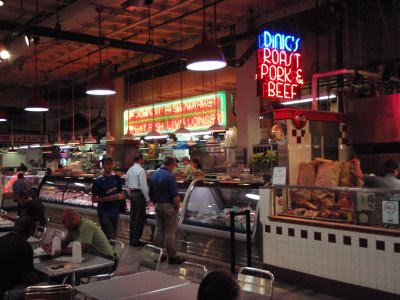 Though a lot of the items are Pennsylvania specialties, they have foods from around the world, and boast of the variety, so they're not like San Francisco's Ferry Building, which makes a point of having only locally produced food.
I was amused by the toque-wearing duck pictured below, since it looks as if one of Donald's nephews has turned Sweeney Todd towards his kind. 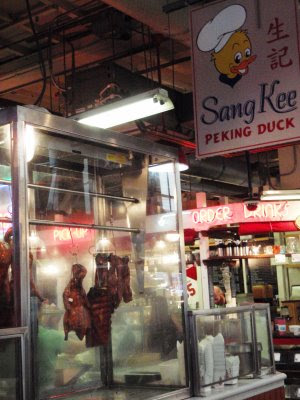 People can sit and eat their food at the tables and chairs set up in one of the large central areas. When I was there lots of the shoppers were obviously out-of-towners visiting for the interleague Red Sox/Phillies game, which I would have gone to if tickets had been available. (You could only get them with a series purchase, or by entering a lottery for a chance to buy a ticket.) Since I managed to get Phillies tickets the last time I visited, a year when their new stadium was guaranteeing sell-outs, I was fairly flummoxed. 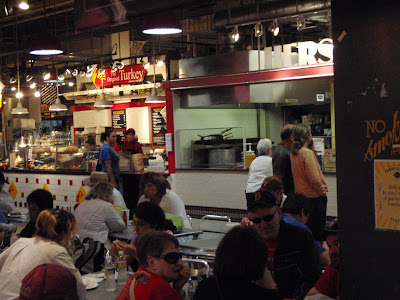 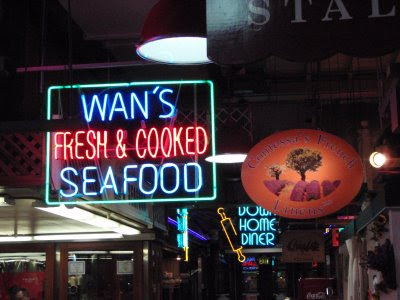 There are some sit-down restaurants in the Market. I didn't go to them, but I did find some good pizza places. Eating can be a bit tricky when you're traveling solo and have things to go to in the evening. Also, though I believe Philadelphia has evolved enough to ban smoking in restaurants, it wasn't that way last time I was there, and I won't even bother going into a restaurant that allows smoking. I'm always glad to find a place that sells food that is fast, healthy, and not too expensive. 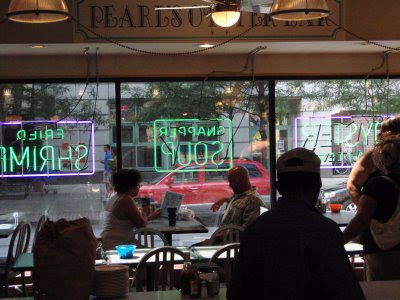 Several of the seating areas, even the small, tucked-away one shown below, have pianists playing standards and pop songs. I ate some rolls there Sunday morning and left a dollar in the tip jar when I left. The woman playing piano had played Rock-a-bye Baby for a mother sitting there with her infant in a stroller. I thought that was sweet. 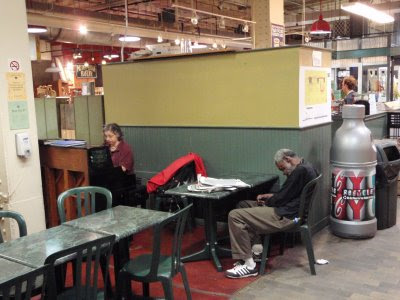 The Amish are a large presence in the Market, at least Wednesday through Saturday. I was going to try some of their food but the vegetables were way too overcooked for this California boy. (As far as other local delicacies go, I won't go near cheesesteak, which is the first thing most people associate with Philadelphia.) 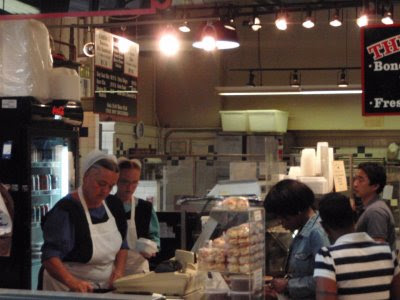 During one of my trips through the Market, I saw the women above helping a customer who was in full traditional punk regalia: piercings, mohawk, the works. I had several reactions almost immediately: this is a perfect shot; maybe this shot is too perfect? a little too obvious?; they can see me and I feel as if I'm treating them like animals in a zoo. This was not the first time such considerations kept my camera in its case. I walked by City Hall one day and saw at least a dozen cops milling around. There were so many, even for the City Hall area, that I was puzzled until I realized they were at a donut shop. And several of the cops had large guts and were smoking (which is when I realized you never see California police smoking, at least on duty). Again, I felt a little odd taking pictures of people only because they were walking jokes. These incidents increased my admiration for sfmike, who does this sort of thing so well.

I probably should have just been insouciant and speedier and taken the picture. The Amish way of life is definitely part of the marketing that's going on. 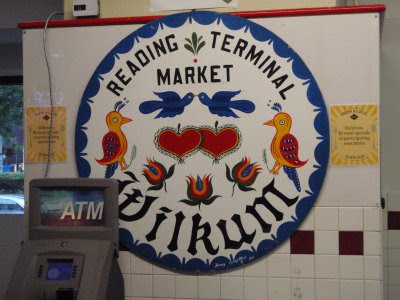 There were quilted potholders and other reminders that Amish/Pennsylvania Dutch territory was nearby. Apparently they keep a lot of bees, too, and sell both honey and bee's-wax items (I assume the wax dragon sculptures below were also for sale). 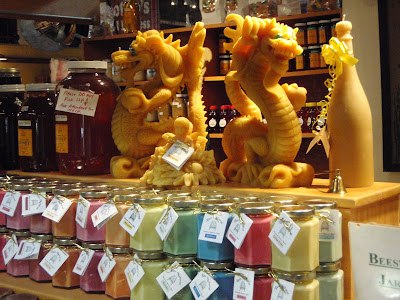 I bought some apples at one market. They weren't that good, but I probably shouldn't have bought the cheapest ones, either. 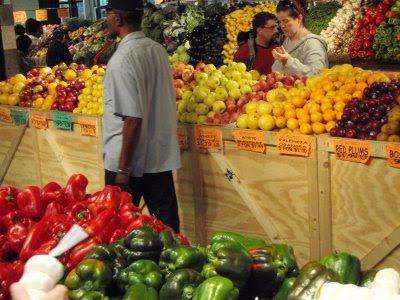 It's not all fresh fruits and vegetables at the Market. 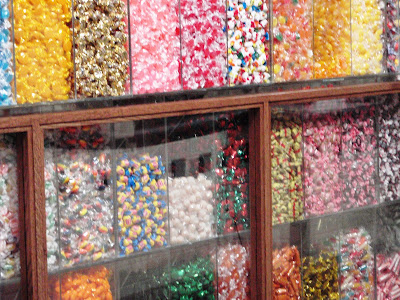 I love the colorful photos from the market. I could almost smell those apples. I'm sorry your choice wasn't very good. I'm wondering where the apples came from, since it's not really the right time of year for apples in this hemisphere.
And, I've often thought that the Ferry Building really needs a candy place, beyond the boutique chocolates. It's time for taffies and fudges to have their day in the sun. (Well, perhaps that wasn't the best choice of words).

I thought about the season, and you, when I bought the apples. I should have gotten something more seasonal, but apples are less work and mess than summer fruits like peaches, even though I prefer those.

Glad you enjoyed your visit to the Reading Terminal Market. Regarding the observation that, unlike Ferry Market, the RTM doesn't restrict items to those locallty produced, keep in mind that the RTM is not a farmer's market: it's a public market. We tend to confuse the two, but there is a big difference. Farmer's markets are (or should be) pretty much dedicated to produce and meat/dairy products sold directly by the producer. Public Markets aim to offer a broader range of food products, certainly including local produce, dairy and protein, but also including baked goods, fish and seafood, etc. Where farmer's markets were founded for the primary benefit of the farmer (though certainly consumers benefit from the fresh produce), public markets were founded (usually by municipalities in this country) as a centralized food marketplace for city dwellers, to assure them access to wholesome products where vendors, under the eyes of local health departments, would compete. Some of today's public markets, like the Reading Terminal, evolved out of historic markets, in the RTM's case dating back to the 18th century. Other cities have worked to build new, or reinvigorate old markets, primarily to improve the liveability (and hence real estate values) of downtowns.

Bob, The Ferry Building is the natural reference point for people in my area for this kind of thing, so I tried to explain briefly how the Reading Terminal Market is different, but your explanation is fuller and more precise, so thanks for leaving it.