As you walk down the Benjamin Franklin Parkway towards the Philadelphia Museum of Art, you pass a small, elegant building that houses the Rodin Museum, which is administered by the Museum of Art. When I was there its front was being renovated, so The Thinker was thinking his thoughts amid scaffolding and plastic sheeting and the dark shadows of the surrounding trees.

Although there are individual Rodin statues I love, I have to admit my feelings for him have never quite recovered from my long-ago trip to Paris, when I spent a day at the museum now in his former home and realized that you could have too much not only of a good but of a great thing. I can even tell you the exact moment when I overdosed: at his bust of Bernard Shaw. In place of the lively intelligence and sparkling humor you might expect was the magnificent melancholy of a dripping river god. I would have taken that as insight into an overlooked side of Shaw -- the sorrow over humanity beneath the satirist's jibes -- except that just about all the sculptures had the same look. Rodin may be deep, but he is not broad, and therefore is maybe not best seen in bulk. 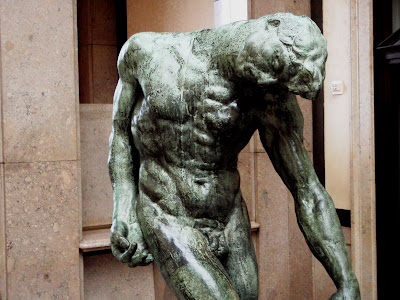 The sculpture above, for instance, a study for the Gates of Hell titled A Shade, is very powerful, especially since it is positioned almost at floor level and is life-size. But about a yard away is a very similar statue depicting Adam, and the conjunction, for me at least, dilutes instead of doubles the impact. 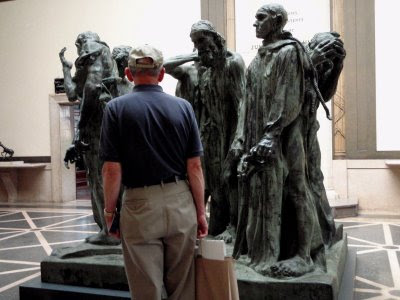 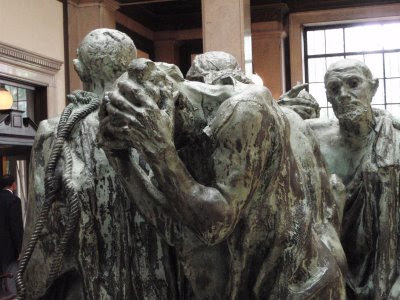 This isn't a problem unique to Rodin. Long ago I had a job where I often had to stay late printing out slides for presentations and suchlike, using systems that now seem laughably slow but were the latest thing then. On one of those nights I had with me the collected poems of Yeats and before I knew it I had read more Yeats than one should read in one sitting. His lyrics weren't designed for that. It's now difficult for me not to associate his poems with that night and the sense of a particular style used once too often. And there are pieces of music I've listened to so obsessively at certain periods of my life that I now can't really hear them through the fog of association and repetition and expectation. I'm very susceptible to the lure of Complete Works, but it's difficult to know how to manage them so that you gain a complete view of the artist's achievement without overloading on his or her method of achievement.

One of my favorite Rodins is The Age of Bronze, shown below. I love how you get a different sense of the young man's situation, his emotional process as it were, depending on how and from what angle you see the statue. 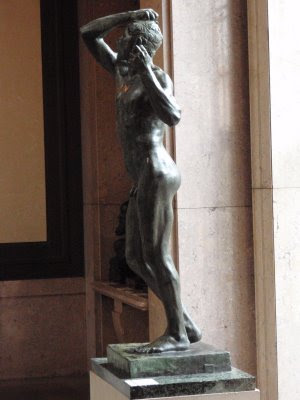 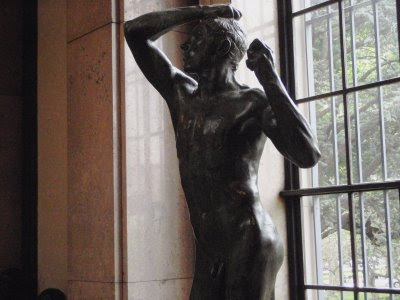 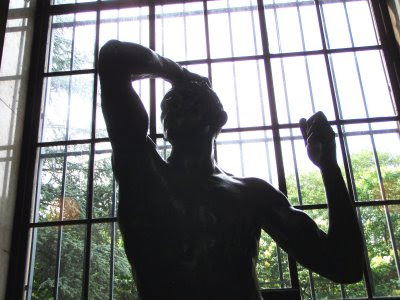