I walked down by Independence Hall one morning, but decided not to go in, since I had seen it on my last trip to Philly several years ago, and it would involve going over to the Park Service building and getting a ticket (which I think was free but might have been timed entry or otherwise inconvenient) and then waiting in line with the busloads of schoolchildren and no doubt going through rigorous security. Since I am an angry-looking bearded man I tend to get extra scrutiny. I saw the Liberty Bell on my last trip and I had to take off my shoes and belt and have a metal detector run over me and delightfully ironic though that was, I felt I could skip it this time. 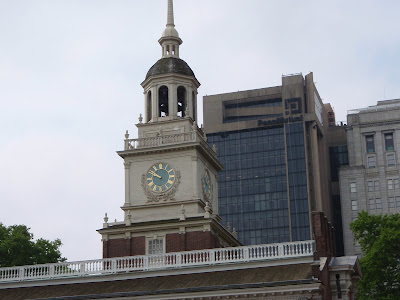 Practically across the street from Independence Hall is the Bourse, which as its name indicates was a stock exchange. It was built in 1895 and is elaborately ornate in the manner approved of by Gilded Age money. 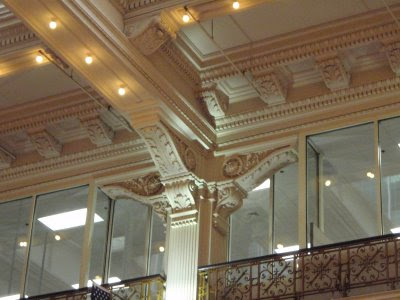 There might be some offices there now, but it's mostly taken up by a large food court and shops clearly aimed at the busloads of tourists. If you're looking for a place to buy a mug/t-shirt/mousepad/whatever showing Ben Franklin saying "Beer is proof that God loves us and wants us to be happy" then you've hit the motherload. One entire shop window was taken up by variations on that theme.

I went in because I was learning to use my new camera and wanted some shots of the building, and also because last time I was there at least one of the restaurants had served fairly healthy food. That place was long gone and I ended up not eating anywhere in the Bourse. I'm not all that picky (I think), but there are things I just don't need to eat and places where I don't need to eat them. I think the august architecture makes the food choices look even more awful than they might in another context. 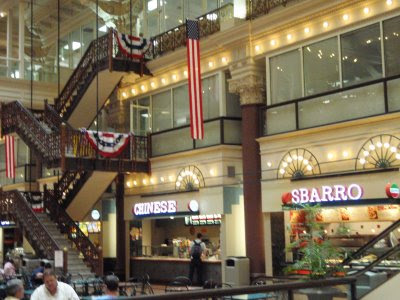 The real highlight in the area is in the lobby of the Curtis Publishing Building, home of The Ladies' Home Journal and the Saturday Evening Post. It's a vast mosaic designed by Maxfield Parrish and executed by Louis Comfort Tiffany and the Tiffany Studios. 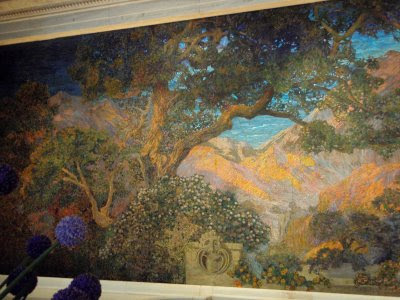 Unfortunately I had not figured out how to use my camera's panorama function, so I couldn't get one shot of the whole thing, but if you're in Philadelphia and like either of those artists (or just color), you should go to the elegant lobby and check out the Dream Garden these artists invented. 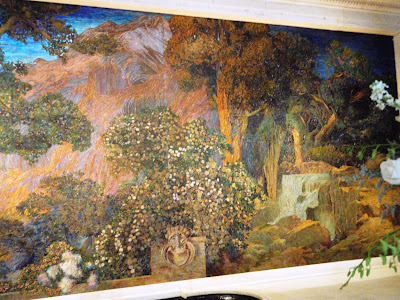 There's an indoor fountain stretching in front of the work, and vases of flowers. 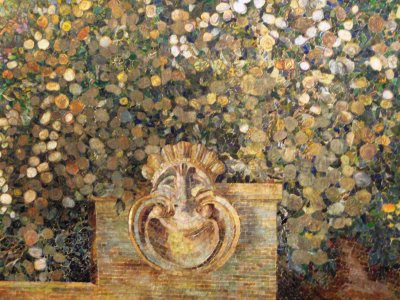 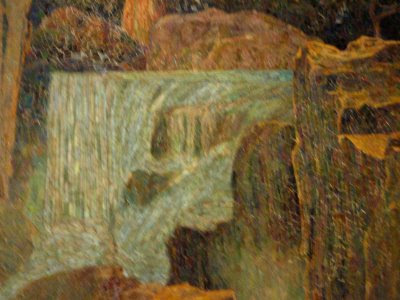 Wow, that was worth the price of admission! I likely will never get to this area but that building is beautiful. I have to say that the bad food eaten in a such a lovely building just bugs but what can I do?

I just saw the Maxfield Parrish exhibit in Sacramento and so really enjoyed the photos that you posted.

I feel I am now living vicariously through an angry, bearded man...

I love the mosaic, and the close-ups are helpful.
I agree with what you said about the architecture making the food choices look worse, especially since my first glance at the photos made me immediately think of our Ferry Building.
However, you and I both know and love a big Sbarro fan who will be amused that you didn't run right in and eat there.

Libby, When it comes to angry bearded men, "vicariously" is always the best approach.

V, I didn't realize we were dealing with a big Sbarro fan -- I thought it was more of a "if nothing else is available" thing. You know my cheese rule: either solid or toasted brown. All that gloppy white stuff. . . .

The close-ups didn't come out as well as I had hoped. I guess the graininess sometimes comes from excessive zooming, though I also don't have the steadiest hands and this was before I discovered the "moving object" feature. These were some of the first pictures I took. The other thing I had to realize, since my last camera used actual film, is that I didn't have to parcel out photos depending on how many of the 26 or so exposures were left on the roll -- I could take a dozen shots of one object and still have plenty of room left over. I didn't even realize for the first day or two that I was thinking that way.

Since I love BOTH of those artists....

Yet another reason to go to Philly!