The story is that we're more and more a visual culture, but I think we're really a movie culture. Back when I still saw movies in movie theaters, I went to the first Austin Powers film, and realized that it was yet another movie comedy that had its funny moments but wasn't nearly as sophisticated or consistently funny as the best TV comedies of the time (in particular, the Seinfeld show). I have the DVD of the Simpsons movie waiting, but I find it odd that after almost two decades of surprising and subversive hilarity anyone still felt there had to be a movie to prove the show's legitimacy.

I had seen and liked the first Rocky movie when it came out, but I haven't seen any of the sequels, mostly because Stallone in the person of Rocky and Rambo came to represent the country's turn to mindless reactionary patriotism and I just didn't feel like it. I'll probably watch them eventually, because I like boxing movies.

Everyone remembers Rocky running up the steps of the Philadelphia Museum of Art and posing at the top with his fists in the air. A statue of this pose was placed there for one of the sequels, and became an awkward leftover once the filming stopped.

You see actual athletes running up those steps, but you mostly see tourists climbing up to pose like Rocky. You'd think if we actually had a "visual culture" these people would then walk into the museum and look at pictures. Some do, lots don't. I think the museum was horrified at this fairly bad statue cluttering up their main entrance (too bad Rodin wasn't around to do it justice), and when I was in Philly about five years ago I heard that there was one of those controversies about where the statue should go. Back then, I was told it was out by the stadiums, but when I went to a Phillies game I didn't see it. The museum had compromised by placing a tastefully understated, conceptual-artish pair of bronze Converse prints and the carved name of our hero at the top of the steps. 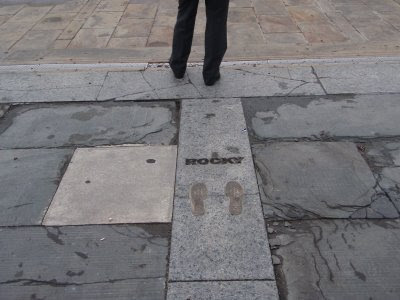 I don't know when the change happened, but the statue is back by the museum, only at the foot of the stairs, off to the right but clearly visible, at the base of the sloping garden leading up to the building. There are always visitors there getting their pictures taken. Sometimes these are kind of fun -- little kids wearing their boxing gloves, a group of Japanese tourists smiling and posing in unison -- and sometimes you get the type of parent who shows up on the 10:00 news for assaulting his ten-year-old's soccer coach. One father was yelling at his little son to smile since he looked constipated. 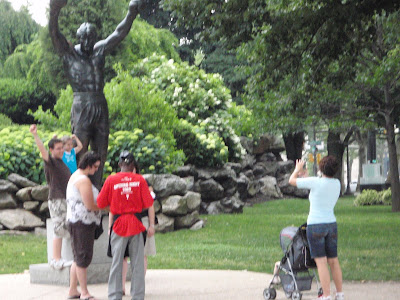 The Museum of Art has apparently made its peace with the statue, or at least with its appeal, since they sell replicas in their giftshop.

And at the Bourse (see Philadelphia 3), one store offers all the Rocky/Yo Adrian!/Italian Stallion wares you could wish. 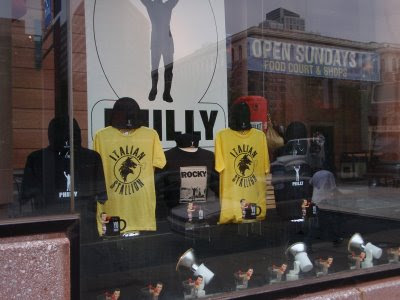 This isn't really anything new. If you get past the Rocky stuff and go into the museum, you can see Bronzino's wedding portrait of Cosimo I de' Medici, pretending to be Orpheus, in a pose inspired by the Greek fragment known as the Belvedere Torso. Different heros for different ages, but the same impulse to copy a hero, and a hope that copying the physique means copying the spirit. 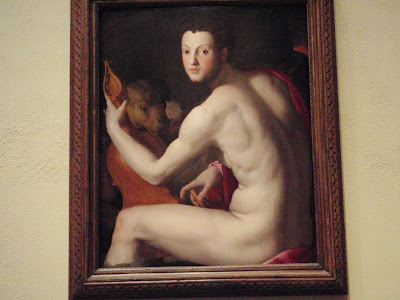 You got me interested in the Rocky Statue story. Here is a link to more information: http://www.ushistory.org/oddities/rocky.htm