the undeniable sexiness of Stephanie Blythe

The San Francisco Performances season opened last Thursday with an all-American recital by Stephanie Blythe. I think everyone there had an outstanding time, including Blythe and her accompanist, Warren Jones.

As with Blythe’s last appearance at SFP, texts for the songs were not available until after they were performed, with the added twist that SFP staffers simply could not find the printed brochures, which led to some frantic last-minute photocopying before intermission. You’d think this would make it simple to follow Blythe’s expressed wish that, since she cares about the words and works hard to make them clear, and since all these songs are in English, we let her see our attentive eyes rather than the tops of our heads as we follow along in the program. Nonetheless there were several audience members who apparently printed the notes beforehand and accordingly were able to rustle them loudly while Blythe was singing, which is kind of a triumph of the human spirit, I guess. 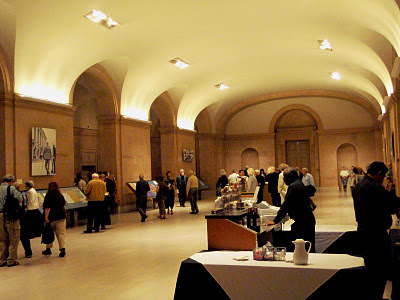 The first set was 12 Poems of Emily Dickinson, set by the late James Legg. Blythe and Jones first took turns reading the poems aloud to us, since Dickinson can be elusive and of course we had no texts to consult. Blythe, not surprisingly, was more effective at this recitation than Jones, who had a tendency to bang on odd words and sometimes slip into a “poetry” voice. Then they performed the set. I like it very much (and I also liked the idea of reciting the poems first), and usually I’m not crazy about Dickinson set to music – her strong and eccentric rhythm tends to swamp all else, including sometimes her meaning – often I find that I’ve swept through pages of Dickinson, led compulsively onward by her beat, until I suddenly come to and realize that I have only the vaguest idea of what she’s been saying. Reading her is like eating salted nuts; you start by savoring one or two and then before you know it you’ve eaten the whole bowl and you wonder when that happened.

Anyway Legg’s set is very attractive (I like it more than Copland’s more famous set, I think), ranging from the somber to the comic, not always as expected, and if any musical accompaniment by its nature limits the implications of Dickinson’s poems, at least Legg’s implications are always thoughtful and appropriate and if they’re sometimes surprising to me that is a plus.

After a few days of unexpectedly heavy rains it was quite hot last Thursday, and it was uncomfortably warm in Herbst Theater. Blythe completed the Dickinson set and introduced Samuel Barber’s Three Songs, explaining that the texts are all from James Joyce’s early collection Chamber Music, the punning title of which refers to an incident during an early recitation when Joyce’s hostess excused herself mid-poem to use the chamber pot. Then Blythe dabbed with her handkerchief at her face and asked, “Is anyone else hot? I’m sweating my bazooms off up here. [Pinteresque/vaudevillian pause] ‘Bazooms’ are what you call a mezzo-soprano’s breasts.” This made us all laugh, of course. “Recitals with Stephanie are always an adventure,” announced Jones. Indeed!

Jones had his chance to shine solo after intermission, when he played several Joplin rags for us (the Peacherine Rag and the Magnetic Rag). The second-half songs were all Tin Pan Alley numbers. In the past few years I’ve noticed a happy trend of including songs from what is now usually referred to as the “American Songbook,” meaning the more sophisticated later works by Gershwin, Porter, Arlen, and suchlike composers. Blythe gave us earlier songs, which I’ve never heard in recital outside of Bolcom and Morris performances that were specifically dedicated to this repertory, genuine Tin Pan Alley numbers that are comparatively less sophisticated but are also delightful and funny and sly and moving and whose charmingly jingley-jangley moon-June-spoon rhymes are part of their appeal.

Blythe’s beautiful Wagnerian voice suited the songs perfectly, which should be surprising but isn’t really; the concert made me think of a German-American beer hall culture where Wagner excerpts would mingle with popular tunes. Blythe is an ample woman, a good-humored generous performer of broad appeal. Her tone was perfect in these songs,* neither overly operatic nor condescendingly campy. Her vamping was perfectly judged, and how often can you say that?

She and Jones brought out everything there was to bring out in these songs, which was quite a lot; highlights included a magnificently enraged After You’ve Gone and a hilariously dirty If You Don’t Want My Peaches. She definitely has a last of the red-hot mezzos thing going on, and would have given Sophie Tucker and Mae West a run for their money if she’d been around then. When I think back on this concert I will probably imagine Blythe in one of those broad-brimmed hats with a fancy walking stick that those ladies favored.

The encore was Foster’s Beautiful Dreamer, so exquisitely and movingly sung that our giddy mood was turned on a dime to reflective tears.

*the songs: Coax Me (Sterling and Von Tilzer), Ask Her While the Band Is Playing (Herbert and MacDonough), If I Had a Talking Picture of You (Henderson, Brown, and DeSylva), After You’ve Gone (Creamer and Tlayton), and If You Don’t Want My Peaches, You’d Be Surprised, What’ll I Do?, and I Love a Piano (Irving Berlin)
Posted by Patrick J. Vaz at 4:32 PM

Email ThisBlogThis!Share to TwitterShare to FacebookShare to Pinterest
Labels: down among the divas, San Francisco Performances