if this is how the world ends, I hope the Mayans were right about 2012

I was at last night's magnificent and thrilling San Francisco Symphony performance of the Verdi Requiem, the mightiest of all requiem masses. Sure, I could quibble about a thing or two, but don't want to; this was as good as it gets. Thanks to conductor James Conlon, soloists Sondra Radvanovksy, Dolora Zajick, Frank Lopardo, and Ain Anger, and most definitely to the SF Symphony Chorus and the Symphony itself, for a rendition that was awesome in both the slang and the strict senses of the word. 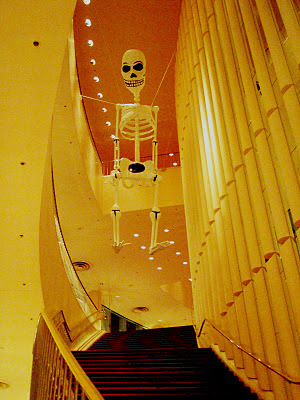 (The jaunty joints of this tall fellow were suspended above the staircase last night, but I suspect the Requiem was a coincidence and he is actually waiting for Halloween/the Day of the Dead.)