Picasso in the park 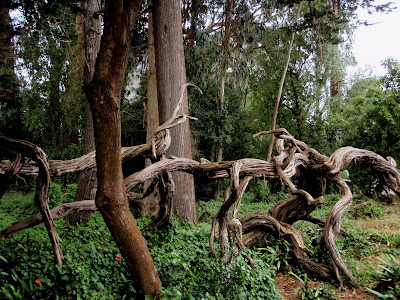 The show has been there a while but I was so absorbed in the Stein collection at SFMoMA that there wasn't room in my world for another exhibit, even one centering on an artist as central to the Steins as Picasso. It turned out to be an interesting complement to the SFMoMA show. Seen in the context of the Stein collection, Picasso seemed to be absorbing and reacting to the influences around him: Japanese prints, African masks, and most particularly the Matisses, whose striking and indelibly wild colors seemed to be pushing Picasso in the opposite direction, towards the monochromatic blue period paintings or towards the subdued browns and grays of cubism.

What the DeYoung exhibit brought out is how incredibly inventive, original, and influential Picasso was. He seemed like his own artistic universe. There must be a dozen pictures each in the show with titles like Head of a Woman, Woman with Hat, Artist and Model, yet each picture is different, often vividly different, from the others. There are pictures hanging next to each other of the same subject, yet one will be done with a classical authority and the other with all the abandonment of modernist distortion.

The curators did a really beautiful job hanging the show, by the way. Though the rooms can get fairly crowded (which is why I went on a weekday), the paintings themselves have well-judged space between them, hanging high enough so that they can be seen from across the room but not so high that you can't inspect them closely once the crowd opens up. 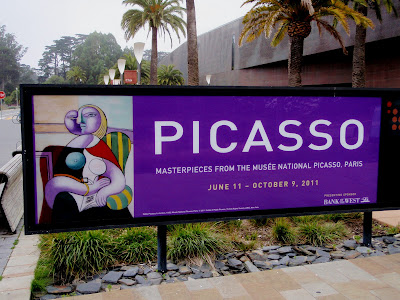 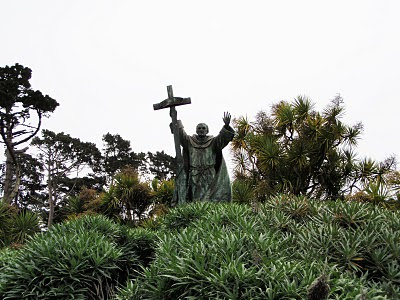 Picasso is indelibly associated with Paris, especially in its avant-garde glory days in the early twentieth century, but he's of course very Spanish, and I was reminded again of how crucial Spain has been to shaping modern art and culture, though it tends to get overlooked a bit. Right by the DeYoung in Golden Gate Park are some reminders of the Spanish cultural influence; above, that's Junipero Serra, founder of the California missions, who covered the state with Spanish placenames; and that's a bust of Cervantes below. The two almost but not quite face each other across the parkway. 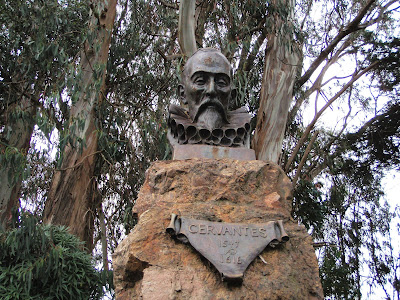 There was an informative booklet available surveying Picasso's career, which I read during lunch in the cafeteria while waiting for my timed entrance to the show. It connects the works with cultural and biographical facts, which is interesting but also irrelevant; if Picasso (in Bullfight: Death of the Torero from 1933) did intend to show himself as the bull and his wife as the wounded horse and his mistress as "the effeminate matador," then that particular emotional complexity may be part of where the picture is coming from, but it doesn't explain the picture for me, a foreign viewer looking on long after the deaths of all involved, in any useful way. The emotions of the picture are there to be unpacked by the viewer and can be deduced without reducing them to biography. I think most artists are actually more immersed in the technical matters of their art. 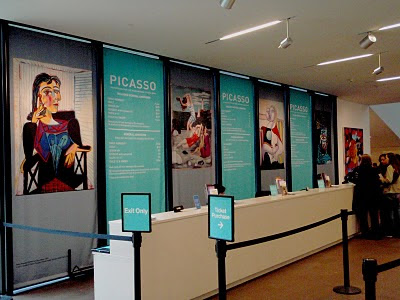 After viewing the show I took the elevator up the bronze tower for the panoramic view of the city, which was beautiful in the fog. But the elevators are rather small and the wait is long and I realized I was kind of trapped up there and I should have just left after seeing the Picasso show. 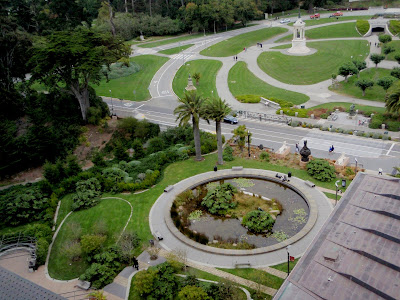 I'll have more chances to check out the view from the tower, since I'm sure I'll be trekking out to the DeYoung several times for their upcoming show of paintings from Renaissance Venice.

I got back on the #5 Fulton bus but hopped off as soon as I was close enough to a BART station. That turned out to be in Civic Center, where there was an interlude of brilliant sunshine and warmth between the fog of Golden Gate Park and the fog in San Leandro. Several skateboarders were taking turns going up a portable plywood ramp, and I was reminded of the energy and expressive physical contortions of the Picasso paintings I had just seen. 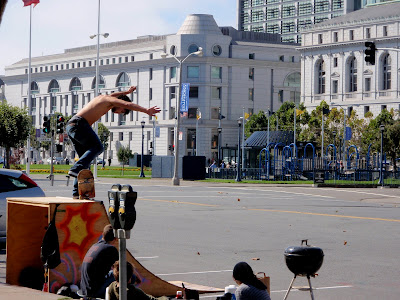 "What the DeYoung exhibit brought out is how incredibly inventive, original, and influential Picasso was." EXACTLY. A truly prodigious life. And I remember when critics were still denigrating the endless stream of work as though it somehow cheapened his achievements. I assume he is laughing madly at them, at the late work is reassessed with some perspective and found....brilliant.

Skateboarders make me happy to be a Californian for some reason, and they always will.

Lisa: There does often seem to be a weird reaction to the prolific, as if fecundity in itself were a bad quality (I'm thinking of attacks on various 19th-century novelists, or in our time on Joyce Carol Oates). Who really knows what is ultimately going to last? I too remember when Picasso's last work was thought a falling-off -- I think "vulgar" was the usual word, which is kind of funny, because it seems like just another way of saying "vital," which is what the paintings look like now.

SFMike: I got the impression the skateboarders were regulars there, so it's good there's one source of happiness for you near City Hall.

Patrick, yes, exactly. There's a notion that creation should involve suffering and revision, and Picasso's endless inventiveness and constant flow of new work, his apparent ease of creation and his joy in it, are completely contrary to that notion. So there must be something cheap or vulgar about it! He is not suffering for his art! Although I am sure some people think it was an unhealthy compulsion!

I can only look at it in amazement. He created art on a daily basis for his entire long life, much of it of seminal importance, and died quickly in his bed of a heart attack at age 91 after painting until 3 a.m. the previous night. What a life.

Yes to all that you say: and I think also people are simply intimidated by the ease and consistent quality and inventiveness. You'd think they'd be generous enough to appreciate it, but, you know: people. . . .

His was an extraordinary and blessed life.