the troubadour plays his guitar

Last week I went over to Berkeley to hear the young guitarist Milos, presented by Cal Performances. He grew up during the latest round of Balkan strife (I think he's 29 or 30 now) and describes himself as from Montenegro, and even more as from the Mediterranean (his first album was called Mediterraneo). He goes by his first name professionally; I suspect that's because he doesn't want to keep correcting the pronunciation of his last name (Karadaglic). As someone who constantly has to correct people who mispronounce my last name (it rhymes with "jazz"), I sympathize.

I was curious to hear Milos for several reasons. Primarily, I thought I would enjoy hearing him play, but of course that's my primary reason for hearing anyone. I have heard some classical guitar but not a whole lot so I wanted to hear some live and expand my live-music experiences. And the marketing push behind him has taken some interesting forms: last summer I was idly channel surfing one day and came across what seemed to be basically an infomercial: a thirty-minute show in which he was interviewed about his second album and its Latin American theme, intercut with scenes of him playing and shooting a music video. And I saw the album for sale from some unlikely source (could it have been QVC?). By the way, I guess I should make it clear I am not looking askance at these methods; I'm all in favor of creative marketing, and I get exasperated when people announce that certain types of music (for example, almost anything composed in the twentieth and twenty-first centuries) "just won't sell" and I think, well, you're not trying. 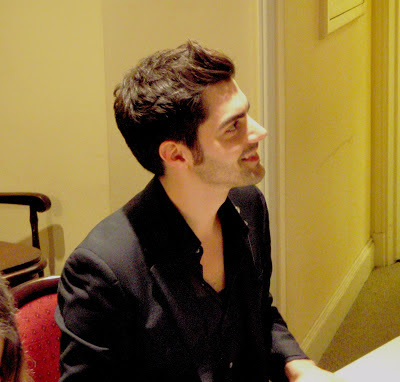 But there's always a certain amount of backlash to perceived hype, particularly when the performer is also notably good-looking. So I wasn't quite sure what to expect last week at First Congregational Church. As the place filled up we saw an empty chair in front of the altar, and a white guitar case on the floor to the left of it. The concert started late (seriously, if you're not going to start a weeknight concert until 8:00, then at least start it on time). As the lights dimmed Milos came out, sat down, put his left foot up on the guitar case, and without looking up or speaking started playing Bach's Lute Suite in C minor, BWV 997.

I've realized over the years that I dislike electric guitar, and then I realized why: it seems a violation of the instrument's inherent intimacy: no wonder love serenades all feature acoustic guitar. I had assumed that there would be a microphone in front of the guitar, but there wasn't. The playing felt very pure and direct. When Milos finished the Bach piece, he then looked up and smiled and spoke. He speaks very much to the point, pausing occasionally and smiling. He said he liked to open with Bach, which was good for "clearing the ears." He mentioned how happy he was to be in this beautiful church and he praised the acoustics there several times. First Congregational has always had a very New England look to me; I wonder what associations he brought to it. He gave some historical background on the Bach piece, which was written before there were guitars. Then he talked about playing Latin American music, and how in Europe and also probably in the US there are fairly clear lines between  what is "classical" and "popular" music but the lines are blurred in Latin America.

So he played four pieces by Villa-Lobos: Prelude No. 1 in E minor, Etude No 11 in E minor, Valsa-Choro from the Suite Popular Brasileira, and Etude No 12 in A minor. He described the last piece as "a showcase of crazy." Milos is not a large man but his hands look large and his fingers are very long and tapered, moving swiftly over the strings. But what I found most impressive about his performance throughout was not the flash and dazzle, but the inwardness. His interpretations (all evening, not just of these pieces in particular) were very poetic, gossamer and fleeting but with underlying tensile strength, like a spiderweb. If you were wandering in a moonlit garden with a fountain splashing quietly, this is the music that would go with the scene. He's clearly a serious artist and one with integrity, which might be a way of saying he clearly thinks more about his playing than his marketing. 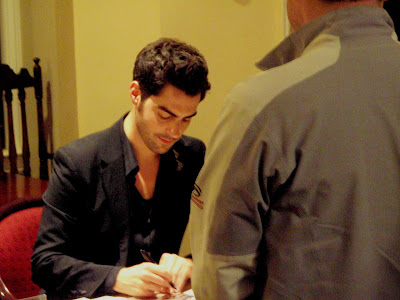 After the intermission he thanked us for coming back: "It's always nice when people come back," which he followed with another quick smile. He played some more pieces, but I think the order was different from that listed in the program. He announced that since he liked the acoustics there so much he would play four pieces. So there was Danza Brasilera by Jorge Morel, Milonga by Jorge Cardoso, Batucada by Isaias Savio, and Un Sueno en la Floresta by Augustin Barrios Mangore (these are among the pieces on his second album). He said that one of them (it might have been Milonga, but I'm not sure) was his mother's favorite, and he liked to play it and think of her since he hadn't seen her in a very long time. He seems to like pieces that transport himself and us to another place. His last piece, Domeniconi's Koyunbaba, was inspired by part of the Turkish coast, and when Milos saw the area, he was immediately reminded of his native Montenegro. So he described it as an inexpensive flight home, and he hoped it would conjure up a similar place for us. The audience was mostly very silent and attentive, but of course it was during the quietest portion of Koyunbaba that some guy behind me started sneezing with a weird high-pitched pew sort of pinging sound. Well, I of all people know that you can't control a sneeze. What was really irritating was that he followed this with the very very slow unwrapping of crinkly plastic around a lozenge. Just rip it off if you must! Better yet, buy the lozenges wrapped in paper! Sometimes people really are hopeless. That aside - that little flaw that throws the beauty of the rest into relief - it was a very impressive and enjoyable evening. 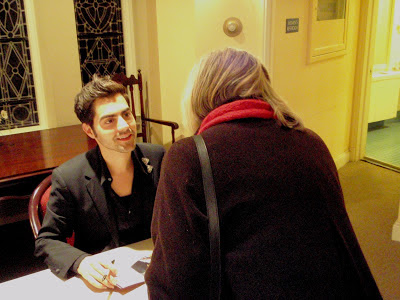 Milos went to the lobby afterwards and signed CDs and programs. (That's where the photos are from.) He was very genial and gracious and very tactfully kept the line moving.
Posted by Patrick J. Vaz at 3:00 PM

He's dreamy enough that you shouldn't complain about his tardiness.

A little bit of acoustic guitar is more than enough for me, so I admire your appreciative endurance, particularly on a work night.

In fairness to Mr Karadaglic, I should clarify that I don't know why the concert started late -- far from being tardy, he may have been back stage (back altar?) champing at the bit to come play. In fact I suspect it had to do with the venue, which opened much later than it usually does when there's a concert. And though Milos may be dreamy enough to excuse tardiness, I don't know if First Congo, beautiful as it is, is quite at that level of dreaminess.

I mentioned the delay as part of my general on-going irritation at weeknight concerts that don't even start until 8:00.

And it was not only a work night: it was the one day of rain we've had (it seems) all year!

The concert did make me think I should maybe check out more classical guitar concerts.