I wandered lonely as a cloud
That floats on high o'er vales and hills,
When all at once I saw a crowd,
A host, of golden daffodils;
Beside the lake, beneath the trees,
Fluttering and dancing in the breeze.

Continuous as the stars that shine
And twinkle on the milky way,
They stretched in never-ending line
Along the margin of a bay;
Ten thousand saw I at a glance,
Tossing their heads in sprightly dance.

The waves beside them danced; but they
Out-did the sparkling waves in glee;
A poet could not but be gay,
In such a jocund company;
I gazed - and gazed - but little thought
What wealth the show to me had brought;

For oft, when on my couch I lie
in vacant or in pensive mood,
They flash upon that inward eye
Which is the bliss of solitude;
And then my heart with pleasure fills,
And dances with the daffodils.

It's late February in California, which means spring is well on its way, manifested not only in the watery (or dry) itchy eyes and running noses and sneezes and bad headaches of allergy attacks, but also in happier signs of the changing season; years ago I planted some daffodils in my backyard, and though I've done nothing with them since but look at them when they bloom around this time of year, and though there are fewer than there once were, they still spring up faithfully and dance in the breeze, just as Wordsworth said they did. I always think of this poem when I see them, though I have neither a crowd nor a host of daffodils. 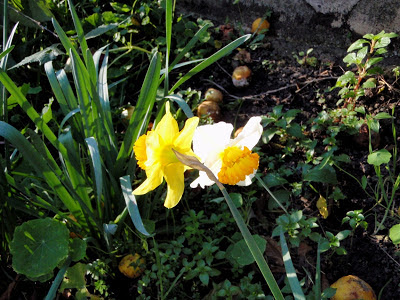 I can hear the boys next door playing basketball, and the children on the other side will no doubt soon be out screaming again, and the people behind me are chain-sawing down a tree. Solitude is very important to this poem; the speaker discovers the flowers while out wandering alone - actually, while lonely. He typifies himself as a cloud, not a man, and we don't know exactly where he is when he sees "a crowd, a host" - there's a sense of being in Nature, but that's only because he's brought a cloud floating high into our minds; that might have been an emotional metaphor, and there's nothing to prevent this from being in a city, and the crowd being one of people, or the host being armies on a plain. It's a dazzling surprise when we suddenly come across the wild spread of the daffodils (I can sense some of the same broad golden effect when I look at the oxalis that has taken over various portions of my yard).

The man is a cloud and the daffodils are personified as a crowd, but at least it's a dancing crowd. The dancing effect is mentioned twice in the first two stanzas, and the nearby waves are also said to dance, though not to such striking effect as the flowers; but the mention of the waves and the bay and the earlier mention of the stars brings a lot of the natural world into conjunction with this glimpse of spring flowers. But it's in memory that the sight has the most power, and in memory that the wanderer also comes into conjunction with the world around him; later, his loneliness turned to solitude, he discovers bliss when the vanished moment returns inwardly to him, and his spirit joins with the remembered daffodils in dance: the lonely man finds company united with the splendors of undisturbed nature.

Wordsworth of course wrote during the beginnings of the Industrial Revolution that would remake the world's landscape and climate. I wonder if his bayside stretch of daffodils is still around, possibly saved only as a marketing possibility for Lake Country tours, or if development has taken over such a desirable spot. (Now my neighbors behind me are playing their crappy music too loudly.) If I ever moved to another house I would plant some daffodils there too, and wait for spring despite its attendant allergies. 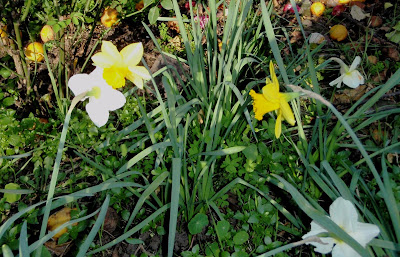 I took this poem from the Penguin edition of the poems, Volume 1, which appears to be out of print, but it's one of his greatest hits and would be in most Wordsworth collections, including this one from Penguin.
Posted by Patrick J. Vaz at 7:00 AM

Thanks to the wonderful internet, I found photos of the daffodils, still there at Glencoyne Bay, if we can believe the internet.
V.

I always believe the Internet. So where's the link? As the kids say, pics or it didn't happen.

but because of the piece from Mrs. Wordsworth's journal that accompanies the photo, I now have this different view of how the poem came about. I am now picturing William just wishing that Dorothy would shut up about the damn daffodils.
V

Thanks for the link. Good thing the Nat'l Trust stepped in at some point and bought the land. I think Dorothy considered herself a great help to her brother (I believe he also felt she was, to be fair).