A couple of Sundays ago I went back to St Mark’s Lutheran Church in San Francisco for Magnificat’s second concert of the season, devoted mostly to vocal works by Carissimi, with instrumental works between each piece by some of his seventeenth-century Roman compatriots (Michelangelo Rossi, Johann Hieronymus Kapsburger, and Girolamo Frescobaldi).

Magnificat’s first concert this season was just a few weeks earlier, but now the lovely little church was cool instead of sweltering and the glaring sun sank below the windows before the concert started. 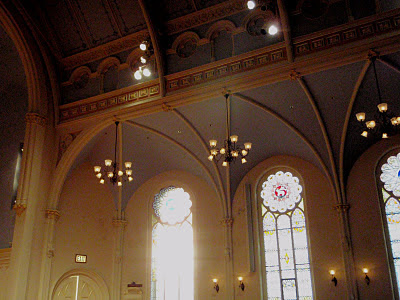 The instrumental interludes were nicely played by John Lenti on theorbo and Katherine Heater on organ and harpsichord. (They also accompanied the singers for the four Carissimi numbers.) Since these pieces were meant as devotional aids they are brief and concentrated, and sometimes surprisingly dramatic for Counter Reformation devotions with well-known outcomes. (The sweet delights of music and drama were meant as the hook with which to catch the attention of frivolous sinners.)

First we had the story of Job, which in this version eliminated most of the poetic speculation from the biblical story in favor of swift and unambiguous action: the Devil destroys Job’s family and property, a heavenly Angel gives him spiritual strength, and so he refuses to curse God. There’s a compelling trio at the end, with the same general participants and outcome as the trio at the end of Gounod’s Faust. 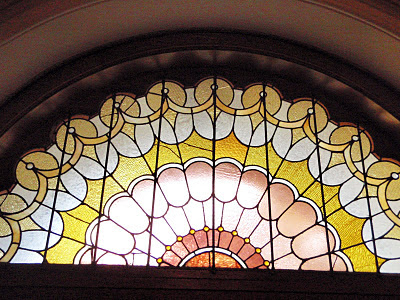 The next piece was a vivid warning about what will happen at the Last Judgment, sung so sweetly that being reduced to dust and ashes seemed rather appealing. The third piece was a straightforward setting of Luke’s story about the disciples traveling unawares with the resurrected Jesus on the road to Emmaus.

The final piece was the story of Jephte (Jeptha) and his daughter, a magnificent setting that is shorter and grimmer than Handel’s great oratorio on the subject. There is no eighteenth-century happy ending imposed here, but lamentations for the death of Jeptha’s virgin daughter, the victim of his rash oath. Carissimi’s setting may lack the subtle and extended drama of Handel’s, but then he’s trying for something very different, something swift and clear that lingers in the mind afterwards. 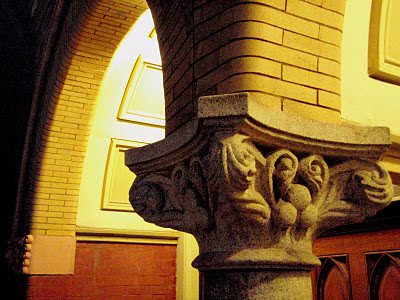 The excellent singers were Catherine Webster, Jennifer Ellis Kampani, and Jennifer Paulino, sopranos; Andrew Rader, alto; and Paul Elliott, tenor. Warren Stewart led the ensemble. As I left the church I was very happy to have subscribed to Magnificat, since if I hadn’t already bought a ticket I probably wouldn’t have trekked out there in the middle of a very busy month.

Their next concert, presented with the San Francisco Early Music Society on December 16-18, is Schutz's Christmas Story, followed in February by Monteverdi madrigals.
Posted by Patrick J. Vaz at 5:29 PM

Email ThisBlogThis!Share to TwitterShare to FacebookShare to Pinterest
Labels: Magnificat