For a city with freezing winters, Philadelphia has quite a few fountains. Most of them are concentrated around the Benjamin Franklin Parkway. One of the largest and most striking is directly in front of the museum, at the base of the stairs in the Eakins Oval. The only picture I took of the whole thing didn't come out very well, so I'll just tell you that in the middle is an equestrian statue of George Washington, raised on a plinth, and surrounding it are figures obviously based on Bernini's Fountain of the Rivers, only with American types and animals. 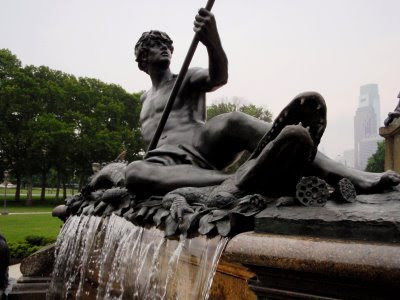 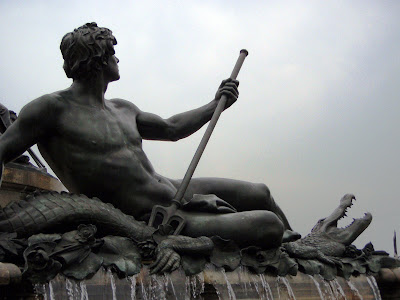 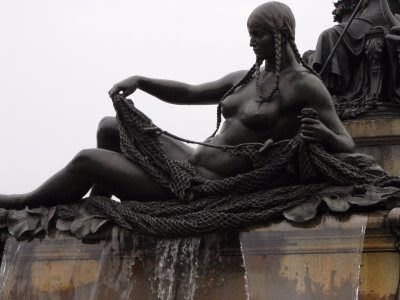 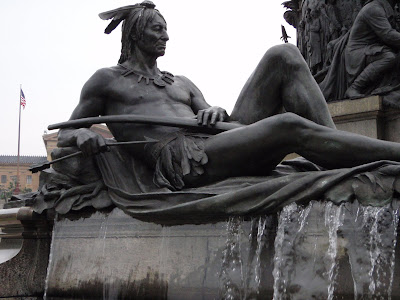 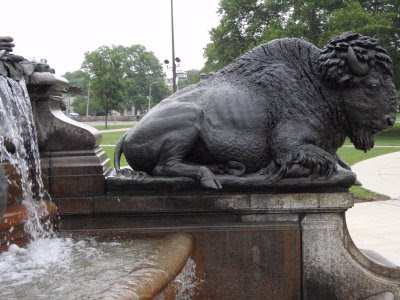 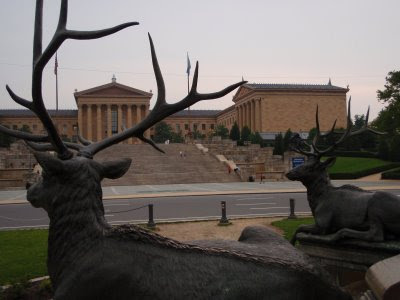 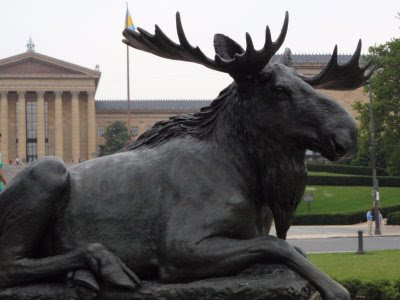 On either side and at some distance from this extravaganza are simpler fountains like the one below. 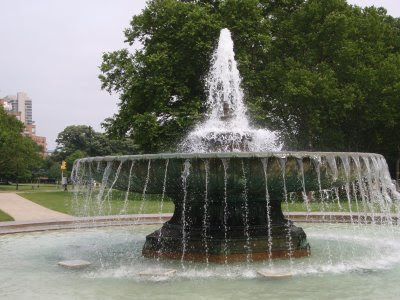 As you go up the steps to the Museum, you see sections obviously designed for running water. 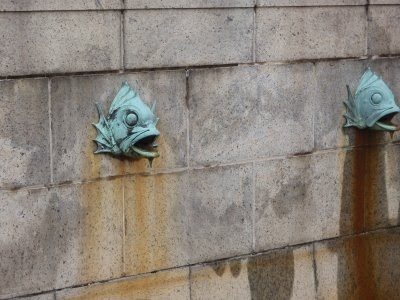 Directly across from the Museum entrance, in the plaza up the stairs, is another fountain, though it was dry when I was there. 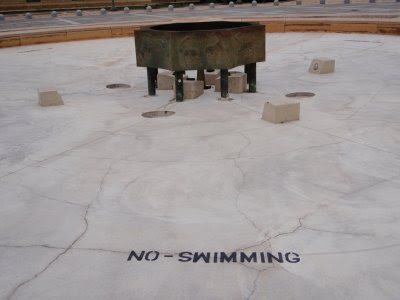 Inside the museum you find still more fountains. The one below is in a large rotunda with French post-impressionist paintings. The photo isn't that great (the pool is fairly large and I may have zoomed in too much), but you can see the top of a van Gogh Sunflower canvas reflected in the water. This fountain is directly in front of Cezanne's Large Bathers, which is in an alcove that was hidden by screens for most of my visit. One guard told me they were painting the walls, but I'm not sure she was right since the paintings were still on the wall and uncovered, since I could see them when they occasionally opened the screens for a moment to pass in or out. If you were painting the wall around a Cezanne, wouldn't you move the painting, or at least drape a few dropcloths over it? The alcove was re-opened on the last day of my visit, so I avoided the disappointment of missing one of the Museum's greatest pictures. 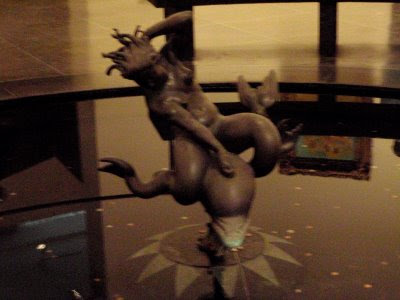 The galleries of eighteenth-century French art rate another fountain, this one featuring Venus herself. That's the same fountain in the two following pictures, only taken from different angles at different times with different settings. 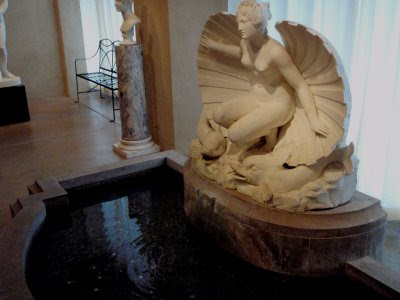 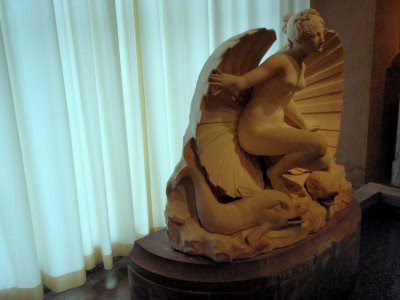 The fountain below is part of the reflecting pool in front of the Rodin Museum. 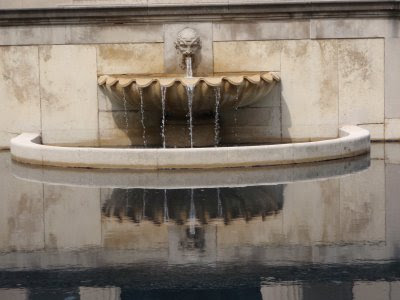 The one below, in Logan Circle, is called the Swann Fountain, and represents Philadelphia's three major rivers. It was designed by Alexander Stirling Calder, son of Alexander Milne Calder (who created the William Penn statue on top of City Hall) and father of Alexander Calder (who created the mobiles). A large Calder mobile called Ghost hangs in the lobby of the Museum of Art, and so thanks to a handy arrangement of windows you can see work by three generations of Calders all lined up. That's one of those things guidebooks will always mention, so I felt obliged to pass it on. 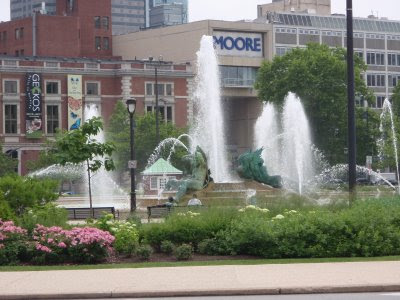 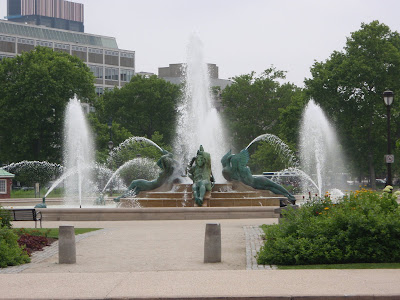 The currently dry fountain below is in Rittenhouse Square, though presumably the colors streaking the nymph are a later addition from the fun-loving residents of the Square. 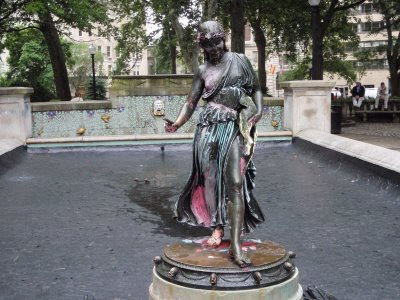 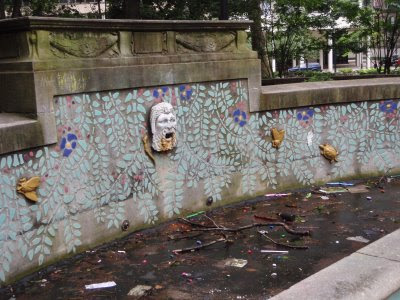 The fountain below is part of the Fairmount Waterworks, right down the hill from the Museum. I have more pictures of the Waterworks which I will post later. 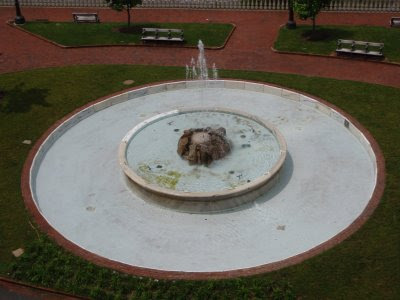 A city can never have too many fountains.
Posted by Patrick J. Vaz at 9:29 PM

And I apparently can never tire of looking at fountain pictures. I especially liked the fish heads.

Shouldn't you be out looking at sloths before they get away?

Happy Birthday! I should go to the Thirsty Bear tonight, just in your honor.

That is alot of statuary or it seems so. Is it alot?

Libby, Sorry, but I don't really understand the question.

If you go to the Thirsty Bear in my honor without me, I'll have to kill you when I return. I'll bring a tropical disease especially for you.

I may be going out on a limb here, but I think The Thirsty Bear would allow me in twice.

If you're a good boy, I'm sure they will.

The best fountain I know is the International Fountain in Seattle Center, Seattle. It is programmable, so you never know what entertaining tricks it might be playing on any particular visit; you can run around in it and get wet, and it's accessible because there is a nice long ramp going down to it.

I am a relentlessly good boy.

I think I know which fountain that is -- kind of between the opera house and the hockey arena? And the water jets can shoot really high from a sphere in the middle of a large sloping pit? That is a good fountain. I don't know if it's better than the Trevi, but it's a really good fountain.

I find that I'm really liking the Villaincourt Fountain in Justin Herman Plaza the more I see it -- the form itself is kind of brutal but makes an interesting contrast with the water.

I like the Villaincourt myself; it's sufficiently twisty in shape that it never struck me as brutal, plus, you can walk through it!

V, You may bring me back a tropical disease, but I will start peppering my conversation with expressions like "'nuff said!" and we'll see who cracks first, my pretty.

Lisa,
It's twisty but not exactly sinuous -- it's all the rough, square concrete that gives it a brutalist look, which plays off nicely with the lacy pouring waters.

And it took me a while to realize you could walk through it, but that's a definite plus (and seems to be key to what you like in fountains -- did you enjoy running through the sprinklers as a kid?).

It's a big plus for me if you can somehow be inside the fountain or get wet in it. I like being in water of all kinds, though I prefer ocean to lake swimming.

I feeling the need to watch La Dolce Vita this weekend!

The Villaincourt is one of my favorite fountains; I bring all my guests there. But last time I had a guest they turned it off for an ice rink. Much sadness.

I do really like that Washington Monument Fountain (The one in your pictures, not the one in DC).

Yeah, the ice rink. Other times they turn the water off and I don't know why -- it seems to last longer than it would for cleaning and maintenance, but then what do I know about cleaning and maintaining fountains? They just turned it back on last week. I was happy.

I first saw the fountain when it was new (decades ago) and I'll admit it took me some time and familiarity to appreciate it. But I was much younger then and probably wanted something more along the frolicking-nymph line.