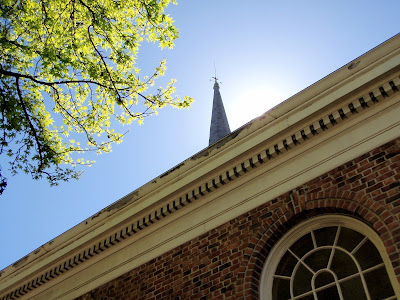 Sunday afternoon I went to First Congregational Church in Berkeley to hear Philharmonia Baroque's performance of Handel's opera Teseo, conducted by Nicolas McGegan, with Amy Freston as Agilea, Dominique Labelle as Medea, Amanda Forsythe as Teseo, Drew Minter as Egeo, Robin Blaze as Arcane, Celine Ricci as Clizia, and Jeffrey Fields as the Priest of Minerva. 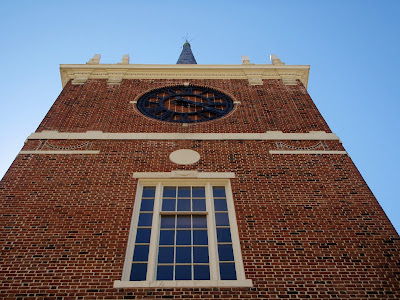 I had seen Teseo on stage once before, in 1985 at the Boston Early Music Festival, with McGegan conducting and staging the work (Drew Minter was also in that production, though he has risen in rank from the confidante Arcane up to King Egeo). I have some vivid memories of the show, even though it was almost thirty years ago. It was staged in the baroque style, with elaborate period-appropriate machinery carrying chosen characters on and off and up from the scene, and with sudden transformations (from garden to desert and back again), and supernatural apparitions (the cast in the playbill includes Gale Ormiston as a Horrid Monster). It was the first time I saw a baroque wave machine in action. But though a baroque audience might have seen something that looked similar, the context is different, and what looked striking and magical to them tends to look charming and quaint to us. I recall the Globe review criticizing a certain - I believe the word used was "campy" - quality, though that may have been directed specifically at the Medea, Nancy Armstrong, who had a lovely crystalline voice but was not a physically imposing stage presence; I think her efforts at stylized eighteenth-century gestures did not quite succeed in conveying danger and menace. And these operas, despite their fanciful plots, do contain real dangers and real menaces, and unless you convey those qualities seriously the operas don't quite come through. But on the whole I found it a very enjoyable evening, and it's remained such in my memory. 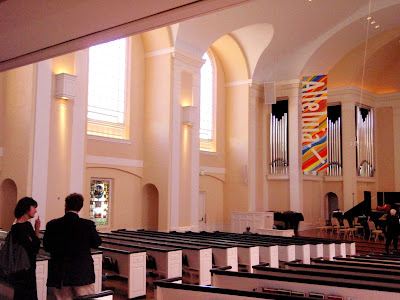 Some of my patience and stamina have vanished over the years, and honestly as I walked into an overly warm First Congo on Sunday, with the late afternoon sun striking directly into my eyes when I sat in my otherwise very fine seat, I wasn't sure, although Handel has always been one of my favorite composers, that I was really up for three and a half hours of him. Well, this is why we show up for these things: the performance was Philharmonia Baroque at its best. The sun sank low enough to spare my eyes and the time flew by, with consistently rich and intent playing from the orchestra and exceptionally fine singing all around; aria after aria flashed by like jewels tumbling from a dropped box.

The acoustics for singers can be tricky in that space but this time they seem to have found the sweet spot. There was an elevated platform (I think it was constructed over the altar) where the action took place, and the orchestra was clustered below and in front of the platform in a cohesive group, with the front row turned toward the conductor at the harpsichord (rather than to the audience). Sometimes I have felt that the staging at PBO can become too jokey, in a way that mocks the material; I don't really understand laughing at a literary/musical/theatrical style just because it's different from ours. This time around that problem was generally avoided, and the staging mostly fit the sophisticated humor of the piece (though there was the occasional bizarre moment - did Teseo really offer Medea some cash when he thought she was helping him to win his beloved Agilea? Or was the sun dazzling my vision?). The comic by-play was mostly charming and appropriate, as when Agilea swung her elaborate gown in gentle time with her woodwind obbligato. 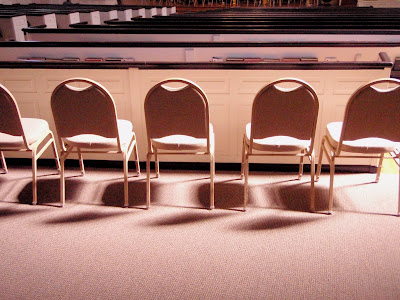 The story certainly has its comedy, but it's a sophisticated Ariosto-style comedy, to go with the Ariosto-like plotline; it's a tale of romantic confusion, longing, faith, and jealousy among kings, heroes, and enchantresses, and though love ends up fairly triumphant, first the lovers must survive the horrid monsters and other malevolent spirits summoned up by the spiteful Medea. The various enchantments were left to our imagination, which was probably just as well. But the scenes were otherwise all vividly acted out, with entrances and exits (as opposed to singers sitting in a row, rising when their roles called for it). The men wore black suits and open-necked white shirts, and the women eighteenth-century-looking gowns, with Agilea and Clizia in soft patterned shades and Medea in severe scarlet. Amanda Forsythe in the castrato role of Teseo wore white pants with a long white tunic over a white shirt. She was obviously a woman, but you got the point. 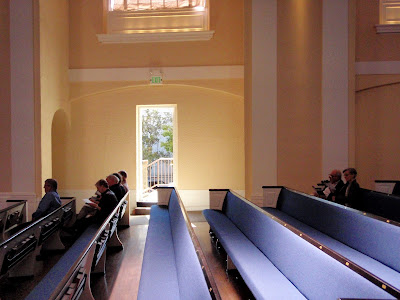 The singers were uniformly strong. Jeffrey Fields was commanding in the small deux ex machina role of Minerva's priest. I had not been crazy about Celine Ricci's voice last time she was with PBO (possibly in Athalia?); I found something metallic about it; but this time I found it beautiful. Robin Blaze lived up to his surname, particularly in his first aria in the second half, Benche tuoni e l'estra avvampi (Although it thunders, and the sky is lit up, a lover's heart will not be afraid). I used to hear Drew Minter fairly often when I lived in Boston, but I have not heard him live for a very long time (though I did enjoy his recent CD). I was pleased to hear that the years had darkened a bit but not diminished the beauty of his voice. Amanda Forsythe was graceful and appealing as Teseo, and Dominique Labelle was vivid and forceful as Medea. But Amy Freston made perhaps the deepest impression as Agilea, with her sensitive and deeply felt portrayal of a woman struggling towards her love. 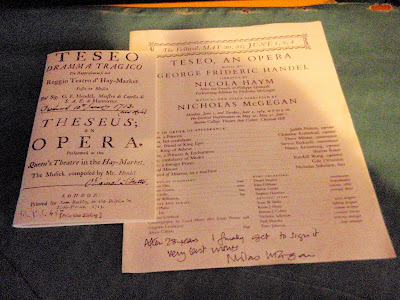 My program from the 1985 production, which McGegan signed for me during the intermission of this performance (it reads After 28 years I finally get to sign it / very best wishes / Nicholas McGegan)

All in all, one of PBO's more memorable performances, and quite an end to their season; check here to see what they have planned for their next one.

I have now seen Teseo live more often than I have seen Ariadne auf Naxos, Manon Lescaut, or Otello; such are the vagaries, wonders, and byways of a life spent viewing performances.
Posted by Patrick J. Vaz at 9:30 PM

I keep thinking that if I heard a really great live Otello I would be converted, but as I have said before I just do not warm up to that opera -- I can't help comparing it to Shakespeare's richer and stranger play. So maybe I'd be better off hoping for Teseo #3.

I am still kicking myself though over not going to the Ariadne auf Naxos at Boston Lyric Opera -- that was the performance that put Deborah Voigt on the map. People still talk about it. I think I was just, you know, overbooked and tired and broke that week.

Yeah, I consider Otello the most overrated opera in the Italian repertory. I would like to see a really great live performance of it but Domingo dropped the role long ago and Martinelli is long gone.

You can't see everything, but we all have performances we're kicking ourselves over missing.

I have also seen Rossini's Otello, which in some ways I prefer because it's just so different from Shakespeare's that I don't end up comparing them.

I'd rather see Falstaff any day.

It is very odd to me that sometimes the performances that haunt my memory the most are the ones I ended up not seeing.

Maybe it is time for me to do a Ones That Got Away posting.

I missed Rossini's Otello when it was done at SFO, which I now regret, of course, though I have a recording of it. And yeah, with you all the way on Falstaff.

Lisa, I cannot believe you just wrote "I consider Otello the most overrated opera in the Italian repertory." Seriously? Just because it's hard to catch a decent live performance of it doesn't make it over-rated. It's certailt brilliant, an easy lock for anyone's Verdi top 10, many would have it in the top 5, and many would argue it's his best and be convicing in the process.

Now, as for over-rated Italian, I would have to put Norma at the top of that list.

Regarding Teseo, I was offered a ticket by a friend to the Thursday performance and turned it down- much to my dismay after reading this.

Well, I saw Domingo in Otello with Katia Ricciarelli I believe, and it was thoroughly satisfying and exciting. As for Ariadne auf Naxos, seen it at least twice in perfect productions (once with Leontyne Price and once with Voigt here at SFO). "Manon Lescaut" you can have.. Seen it twice with the great L. Price again and also the recent Mattila version, and laughed derisively through both productions. Sola perduta e abbandonata it can remain.

Glad you enjoyed the Handel. I'm doing an early music sabbatical for a while.

JM: Glad I was persuasive, but if I'm remembering correctly you are not a big fan of baroque opera, and so any Teseo would be at a disadvantage with you. Also, you didn't ask, but no, Otello is not in my list of top Verdi (meaning my favorites). In no particular order:

That's 7. I could easily come up with lesser favorites or ones I don't know as well to fill out a top 10. Otello just doesn't make my list, though of course such lists are always subject to revision.

I'll let Lisa defend Norma, if she is so inclined. I love it, but if you don't, you don't.

Mike: I saw that second SFO performance, with Voigt, and Ariadne immediately became my favorite Strauss opera. Sadly for me, since it was her voice that made me love the art form, I never saw the great Leontyne Price in an opera, though I heard her in recital fairly often when I lived in Boston, and she often did opera arias.

I've read Abbe Prevost's novel of Manon Lescaut, and though it's quite entertaining it honestly struck me as almost a self-parody -- it sounded very much like the parodies of romantic fiction that Jane Austen wrote in her young days.

JM, yeah, I really did write that. Otello has a lot of great music but dramatically it just does not hang together very well. The libretto compresses the action too much and doesn't provide time for the situations to unfold. I have a really hard time believing what I see on the stage.

Yeah, Norma. I find it more dramatically effective than Otello. It has some great music!