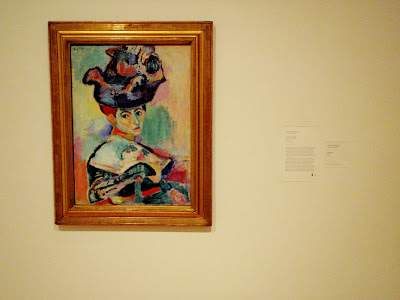 After a long time and lengthy travels, in which she visited her birthplace Paris, and New York, and was reunited with old companions as part of the moving and awe-inspiring Steins Collect show, SFMoMA's Mona Lisa is back. 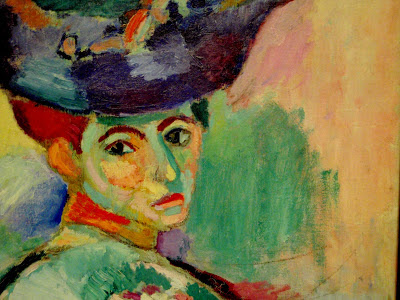 That would be Matisse's Femme au Chapeau, a portrait of Mme Matisse whose wild and vivid colors, still striking 107 years after the painting first shocked the Parisian public, led a derisive critic to christen Matisse and his ilk wild beasts (fauves). Thus the Fauvist School was named. It's odd how many styles (like Gothic or Impressionist) were named by people who were attacking them. Matisse was once asked what color Mme Matisse was actually wearing when she sat for this portrait, and he said, "Black, of course." 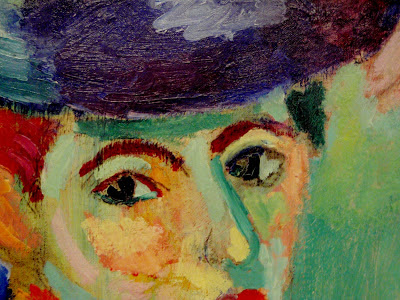 This has always been my favorite painting at the museum. Comically, I could not take a picture of it when it was part of the Stein exhibit, but now that it's back in its regular place on the second floor, I can snap away (without flash, of course). Buying this painting, one of the centerpieces of their collection, is described in interesting and not entirely accurate detail by Gertrude Stein in The Autobiography of Alice B Toklas. 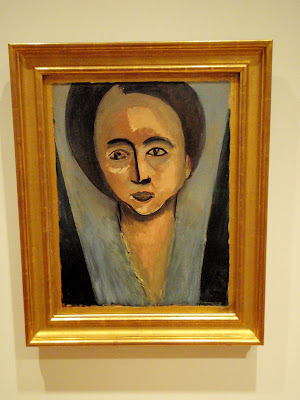 Sister-in-law Sarah Stein is back, too, from the same trip, and is on the wall opposite, where she silently asserts that it was she and her husband Michael who really understood Matisse. And that is true. Gertrude was more about Picasso. 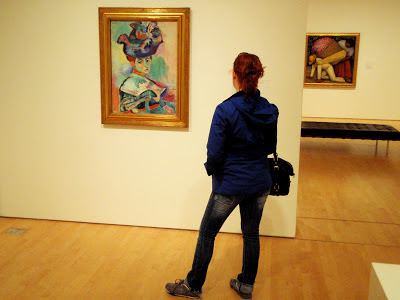 Due to a planned renovation and expansion, the museum is scheduled to close next spring for about two years. I'm not sure where the collection is going during that time, but I suspect most of it won't be readily on view, so it won't hurt to pay a few more visits in the months that remain.