killing me softly with his song

Last night I was back in Berkeley to see the Shotgun Players production of Sondheim's Assassins, a musical revue featuring presidential assassins and would-be assassins, from John Wilkes Booth to John Hinckley. Given the subject matter as well as America's tortured love affair with both guns and presidential power, the show became instantly (and I assume intentionally) controversial, though this seems to have helped as much as hurt its continuing stage life (it's already been revived on Broadway, after its 1990 premiere, and at least one of last night's actors has appeared in two other local productions, each time as a different assassin).

The stage is set up like a carnival tent, run by the Proprietor, a carnival barker selling chances at the shooting gallery, and our merry band take turns telling their tales. We start with Booth and Lincoln but after that the stories are woven together in an historical fantasia that follows a theatrical rather than a factual path. Each assassin plays supporting roles in the other's stories. The dead speak to the living, and the living speak to each other unconstrained by geography or mere fact. That is not meant as a criticism; though the show is in a sense a history lesson, it's a history of dreams and disappointments and possibilities and impossibilities, rather than of who did what when and where to whom according to reliable records. ("Why" is always up for debate, no matter what type of history it is).

The basic idea of the show is to take one of the primary delusions of American individualism - that anyone, just by hard work (apparently any sort of work, as long as it's "hard"), can become successful - can even become President! - and invert it to draw attention to the dispossessed, disappointed, and disgruntled: if you can't become President, maybe you can become a presidential assassin, and change history that way - the view being examined here is very much of individuals shaping history, their own or the country's, as if there are no larger historical or economic forces at work. 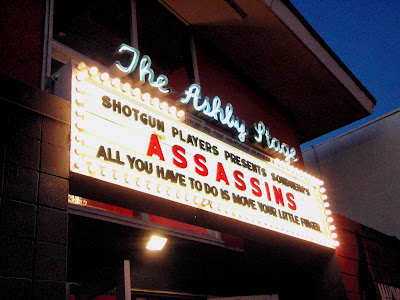 The ethos of Individualism as a significant and powerful force also emerges in the American love-hate relationship with celebrity, which is another major theme of the show: assassination (as Booth points out, "murder" is for lowlifes; when you kill a president, it's - he gives the word such an alluring hiss - assassination) is a way to become famous and even immortal (like Brutus, assassin of Caesar), or just to attract the notice of the celebrity you're fixated on (notoriously there's Hinckley with Jodie Foster, but also Squeaky Fromme with Charles Manson and Sam Byck* with Leonard Bernstein, among others). Booth of course was an actual actor and he shot Lincoln in a theater, but many of his fellow killers, in less formal and professional ways, are also acting various parts. Booth gives an extended talk on Death of a Salesman, in case we are missing the point that though the unsuccessful drop out of sight in most American media (which is after all driven by advertising dollars), they do have their significance in our theater.

The basic idea of the show is interesting and provocative, but it seems like one of those things that will always be more interesting and provocative as an idea, and maybe less so in its results. The problem for me is that though there seems to be a lot of potential in the general idea of using assassins rather than Presidents to take an inside-out and upside-down look at America, once you start looking at their stories in detail the general idea falls apart, because the actual motivations and circumstances of the assassins are all over the map. Some of them (like Charles Guiteau, assassin of James Garfield, and Hinckley) were mostly crazy; some (like Leon Czolgosz, anarchist assassin of William McKinley, and Booth) had definite political motivations; many (Sam Byck, Squeaky Fromme, Sara Jane Moore, Giuseppe Zangara) fall somewhere on the spectrum between insanity and political conviction. And at least one remains somewhat mysterious (Lee Harvey Oswald).

Forcing all these disparate types into one thesis can't help but feel a little superficial, even though the work tries perhaps a bit too cleverly to use the superficiality and the carnival razzle-dazzle as a way of examining the superficial (such as the simplistic, naive thinking of the assassins - if I work hard, I will be successful! if I shoot the President, I will change the world!). The music and lyrics have that distinct Sondheim tang, but are verbally and emotionally less complex than in many of his other works. Some of the more extended sequences of John Weidman's book drag a bit despite the skill of the actors because they are so obvious: yes, we (that is, "we") see Presidents as fathers, and we want Father to take care of us, and we're angry when he doesn't; yes, we (again, "we") think we know celebrities, and are angry when our insignificance is magnified by the knowledge that they don't know us.

I thought some of the more entertaining and interesting moments were provided by the lighter interactions, such as those between the bumbling Sara Jane Moore and the delusional Squeaky Fromme. ("Oh, look!" said the woman behind me, examining the cast list before the show started, "there are women!" She was certainly old enough to remember those two, though maybe she can be excused given her British accent - who knows where she was living then?). Moore and Fromme are mostly played for laughs, as is Gerald Ford in his very brief appearance, though my memory of both those assassination attempts is that at the time no one was particularly amused.

But that's fine: as I said, there's a certain amount of superficiality built into the over-broad thesis of the show, so you might as well go for the frisson of shock, and the theatrical relief of comedy, when you can. Before the performance I heard a man sitting in front of me say, "I wonder if they'll do Lincoln?" I don't see how you can take up this subject and not "do" Lincoln. Though  his assassination can provide material for sharp, keen-witted comedy (see Suzan-Lori Parks, Topdog/Underdog) here the treatment is mostly serious, and any satire is directed at Booth: the Balladeer strums his banjo, asking Why did you do it, Johnny?, calling Booth a madman, mentioning bad reviews and too much liquor, while Booth protests that his aims were lofty and noble. The assassination of Lincoln is one of the great primal tragedies of American history, its effects rippling down the many decades since then, but the thing is, it was many decades ago, and we're distant enough for at least some irony. 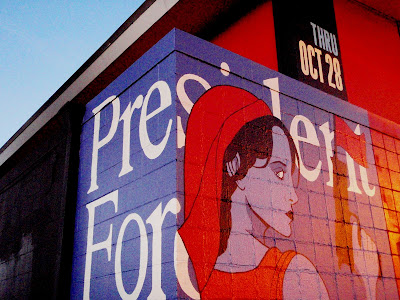 Distance, or more specifically the lack of same, may explain the treatment of Oswald and the Kennedy assassination. I have no memory of it, but I've noticed that many people just a year older than I am do. It must be one of their very first vivid memories. Though it's debatable (at best) whether the Kennedy assassination had a political and historical effect anywhere near that of the Lincoln assassination, it was undeniably an emotionally traumatic event for the country. Unlike the other assassins, Oswald does not appear in the opening number and takes no part in the stories of the others. It was nearing the end of the show (100 minutes, no intermission) and I was starting to think that Sondheim and Weidman had oddly omitted Lee Harvey Owald. But as with Lincoln, I don't see how you can take up this subject without "doing" Kennedy. Then the other assassins ganged up on the Balladeer, stripped him down, and turned him into Lee Harvey Oswald. Booth appears to him and they have a long, earnest conversation in which Booth tries to persuade the suicidal Oswald to shoot the President instead, arguing that by doing so Oswald will somehow validate all the rest of them. (It seems doubtful that an egomaniac like Booth would offer that role to anyone but himself, but then he's had some time on the other side to put at least certain things into perspective.) Theatrically the scene is an attempt to change and deepen the tone a bit, to move beyond shock into a larger historical and psychological view, but it's also a way to contain and pay tribute to the emotions the Kennedy assassination still evokes among many. But, you know, time shouldn't reduce our empathy; those emotions surround anyone being shot, and anyone desperate, crazy, or convinced enough to shoot. I think Assassins will always be a show whose shock pulls us in while its emotional and political limitations can't help but put us out a bit.

As for this specific production, it's very good. (This is the first time I've seen it on stage, though I have both Broadway cast albums.) The cast is strong and the staging is sharp. However, and this is going to make the show a nonstarter for some, it is (unnecessarily and inexplicably) amplified. The Ashby Stage is a small house and if your voice can't fill that space, you shouldn't be a performer. I wonder why they decided to mike everybody? I wonder if it was even up for discussion, or if the automatic assumption now is that any singing should be amplified. It's possible that only the singing was amplified, since most of the dialogue sounded more or less natural (though they may also have adjusted the sound during the performance; there seemed to be fewer problems towards the end of the show). But even though as I noted above the lyrics aren't as sophisticated and twisty as they can be in much of Sondheim's work, the result of the amplification is that above a certain volume the words were almost impossible to make out (this is a particular problem with Giuseppe Zangara, would-be assassin of FDR). People tend to listen more carefully when the sound isn't artificially pumped up (this is why opera divas come out on stage for their recital encores and murmur their thanks to the adoring crowds, who fall silent and strain to catch every word). Maybe one odd result of our world of relentless loud noise is that many people train themselves to half-listen above a certain volume. It disengages you from the actors. I wish they had taken advantage of the intimacy of the space; the actors are right there in front of us, but we're not allowed to hear their natural voices. It's like sitting next to someone who insists on shouting in your ear. Weird.

The show runs through 28 October and schedule and ticket information is here.

* Sam Byck planned to assassinate Nixon by flying a plane into the White House, which I had completely forgotten about.
Posted by Patrick J. Vaz at 8:29 PM