Given that I'm still trying to catch up on last season's stuff, I'm not sure I'm going to do any general previews of the fall season, but there will be these monthly previews as usual, so dive in and enjoy:

I am celebrating the John Cage Centenary by re-running one of my favorite pictures of myself ever (above); there I am reflected in the score of Cage's 4'33", taken several years ago at the San Francisco Museum of Modern Art by SFMike. SFMoMA continues the celebration with several special events; check here for details. And while you're at the Museum don't forget to bask in the awesomeness of Cindy Sherman, on view until 8 October.

Over at the San Francisco Symphony, Semyon Bychkov conducts the Schubert Unfinished and the Shostakovich 11, The Year 1905 (12 - 15 September), and Michael Tilson Thomas conducts the Mahler 5 and the west coast premiere of Drift and Providence by Samuel Carl Adams (28 - 30 September).

Hey, look! Someone around here is actually marking the Benjamin Britten Centennial! Kudos to the New Century Chamber Orchestra and their Music Director, Nadja Salerno-Sonnenberg, for celebrating a great composer who is being completely ignored by the Opera and almost completely ignored by the Symphony (the Double Concerto is currently scheduled for a June concert). The NCCO will present Britten's Simple Symphony and Les Illuminations, along with Bartok's Divertimento, 18 - 23 September, in various locations (check here for more information.)

The San Francisco Early Music Society presents French oboe music of the late seventeenth century: suites by Francois Couperin and Francois Chauvon and arrangements of of airs serieux by Michel Lambert and Joseph Chabanceau de la Barre, 21 - 23 September, with Debra Nagy on oboe, Josh Lee on viola da gamba, and Michael Sponseller on harpsichord. Despite the organization's name, only the Sunday concert is actually in San Francisco, at St Mark's Lutheran; Fridays are in Palo Alto and Saturdays in Berkeley at St John's Presbyterian. More information here.

Sometimes it starts like this . . . you'll catch the reference if at some point you caught Jacques Rivette's Celine and Julie Go Boating. It used to play fairly regularly around Harvard Square back when I lived in Boston, and I would go see it almost every time it showed up (despite its length - it's over three hours), but I haven't seen it in decades and as far as I know it has never been available on any home media. It's playing at the Screening Room at the Yerba Buena Center for the Arts, 20 - 23 September, in a new 33mm print (so what I'm really hoping for here is a DVD release, but if you can't wait, there's more information here).

Starting 15 September over at the DeYoung Museum you can see major modernist works (Cezanne, Matisse, Picasso, and others) from the William S. Paley Collection, on loan from the New York Museum of Modern Art. The exhibit is up until 30 December.

There are a couple of student orchestras on offer: on 21 - 22 September in Hertz Hall the UC Berkeley Symphony Orchestra presents the Brahms 4, Stravinsky's Song of the Nightingale, and Bartok's Dance Suite, conducted by David Milnes; and on 29 September at the San Francisco Conservatory of Music Alasdair Neale conducts the Conservatory Orchestra in Jolivet's Concerto pour Percussion (featuring Masako Iguchi), Louis Cruz's Calafia, and the Mahler 1.

Generally I ignore the opening nights of the Opera and the Symphony because they are social rather than artistic events, but those are happening this month too. There's plenty of information available about them elsewhere, so I won't bother linking to anything, but here's a picture of some helpful ushers showing the society swells to their proper seats: 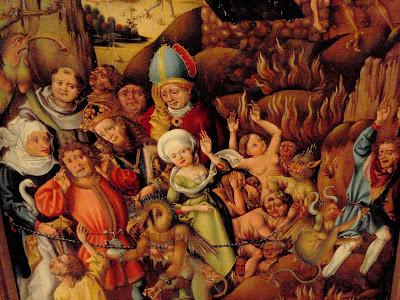