Clash of the Titans

There's something about a "collected works" that I've always found irresistible. Sometimes I will hesitate for a while, but generally I cave in, and rarely do I regret it. So last March I ordered the Toscanini Complete RCA Collection. It finally showed up mid-July, after several months in which the release date kept getting pushed back (no idea why) and the price fluctuated with a stock-market wildness. Luckily I bought low. 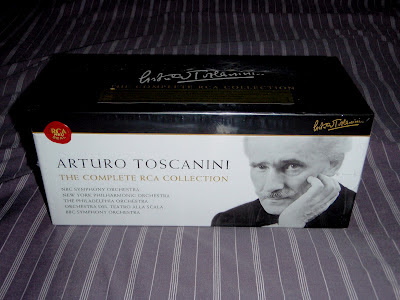 The first record I listened to obsessively was a Toscanini disc belonging to my mother. I was equally obsessed with both sides: one had Gershwin's An American in Paris and the other Prokofiev's Symphony No. 1 in D Major, the Classical. It was only much, much later that I realized both pieces were very unusual repertory for Toscanini.

For old time's sake I found the Gershwin first and listened to it. This performance is so ingrained on my memory that for me it is the piece, so I don't really have any very illuminating second thoughts; it's clear and jaunty, with a lot of rhythmic snap and forward propulsion, and as irresistible as ever. The rest of the disc has some Americana-type pieces as well as American classics like the Barber Adagio, but I just listened to the Gershwin a couple of times. I would have preferred hearing it with the Prokofiev (which I assume is somewhere in the box). I will now go back to Disc 1 (Beethoven 1 and Beethoven 3) and work my way through the rest, always keeping an eye out for the yet-unseen Prokofiev. 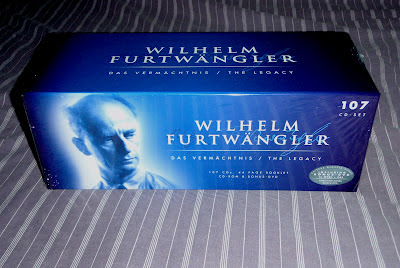 When the Furtwangler "Legacy" set came out last year I considered it but decided I already had a substantial number of the recordings so I could skip it. But once I had the Toscanini I started to think I should give equal play to his fellow Olympian (plus I could always sell duplicate discs to Amoeba or Rasputin's), so I went ahead and bought the Furtwangler, which arrived about a week after the Toscanini.

As sometimes happens, two great artists with complementary energies rose at roughly the same time. Their lives and their struggles against the oppressive politics of their time took very different paths, but whenever I am being driven crazy by someone else loudly playing recorded music, which is often, I remind myself how lucky I am to live in a time when the great souls of these physically dead artists are available with miraculous ease in these neat little boxes, waiting for whoever cares to hear them. 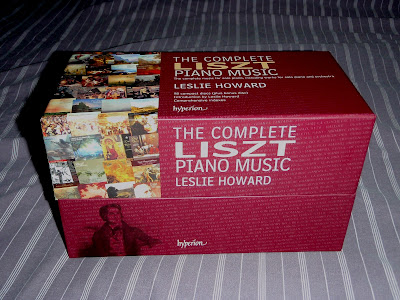 In fact it's almost too easy to get this stuff these days, too easy to take it all for granted, or to load up on tempting items that sit on already over-crowded shelves, waiting their turn. I bought the Liszt complete piano music set well over a year ago, and am only two-fifths of the way through that bad boy. If only we had separate lifetimes to absorb fully each thing we need to absorb, but incompletion seems to be our fate.
Posted by Patrick J. Vaz at 9:08 PM