I’m now slightly embarrassed to admit that I barely knew who Regina Carter* was when I went to her SF Performances concert last Saturday, since she’s been here multiple times under their auspices and was their first jazz Artist-in-Residence; she also has been awarded a MacArthur Fellowship and was the first jazz artist, and the first African-American, to be allowed to play on Paganini’s own Stradivarius, now housed in Genoa – you'd think something of all that should have registered her name on my brain. I went because this was one of the concerts SF Performances offered to its subscribers in lieu of their usual free subscriber concert by the winner of the Naumberg Competition, and I don’t get to hear as much live jazz as I’d like and the timing worked out, so I figured why not, and I asked ABW (who also hadn’t heard of Carter) if she was free, and she was, so there we were at Herbst.

OK, we both now know who Regina Carter is, and will not be forgetting the name after that spectacularly enjoyable evening. Carter was joined by Will Holshouser on accordion, Chris Lightcap on bass, Alvester Garnett on percussion, and Yacouba Sissoko on kora, which is a twangly 21-string African harp-like instrument (Sissoko, who wore a long silky sky-blue African robe, was born in Mali and actually trained as a griot, but he also learned Western music, so he can play in more than one key; his instrument is a lovely thing made out of a very large gourd, with a special type of wood as the bridge, and fishing line as the wire – he gave us a brief and charming description of it, which is how I know these things).

The concert was based on Reverse Thread, Carter’s latest CD, which was on sale in the lobby for the bargain price of $10. I bought one even before hearing the concert (“He can’t not buy music,” said ABW, which is, sadly for my bank account, the truth; in fact I've already ordered her Paganini CD and have been eyeing a couple of others. . .) . This turned out to be a good decision because afterwards there was a crowd waiting to buy them, and the line to have Carter sign them was so long – snaking out of the theater lobby into the larger entrance lobby, the longest line I’ve ever seen at an SFP concert – that even I, who love signed things, decided not to wait.

The concert was about two hours long, with a brief intermission, so it couldn’t have been a simple recreation of the CD (which I haven’t listened to yet; I want the live sounds to linger a bit longer). The music is based on various influences on the Detroit-born Carter: not just the more obvious American or African ones, but also on music she heard in Detroit ethnic communities such as the Chaldeans, a group of Christian Arabs, and from those influences out to other groups, such as Ugandan Jews. We heard a couple of field recordings of some of the pieces, followed by the group’s arrangement of the material. There were extended improvisations and solos, as is the jazz way, and they all had their moment or moments to shine.

The world-music aspect may suggest something a bit trendy, or arbitrary, but the music itself feels lived in and loved. I never got that “Hey, listen to my cool new World Music CD that I got at Starbucks!” feeling that I sometimes get when Latin/African/Arabic rhythms are incorporated into predominantly Western styles. From moment to moment I was reminded of very different sounds – old French popular music (the accordion!), Celtic music, hymn tunes, African drumming, Django Rheinhardt’s jazz, brief snatches of My Country ‘Tis of Thee or When the Saints Come Marching In, Cuban bands – but it all feels as if all the layers belongs together; some of my favorite moments were when Carter played a stately hymn tune on the violin while a sophisticated African-style drumming pattern ran beneath her. ABW turned to me at the break and said, “It’s amazing how joyful this music makes me feel.” Yep, there it is. 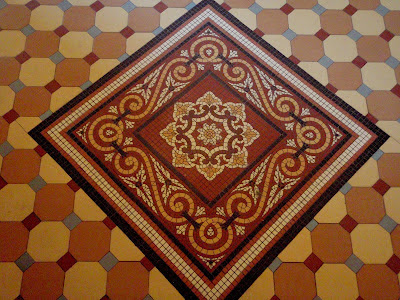 Then on Sunday I traded in the kora for the theorbo and headed up to St Mark’s Lutheran for Magnificat’s all-Monteverdi concert. Based on his Eighth Book of Madrigals, the concert was called “Madrigals of War and Love,” meaning mostly Love as War. Artistic Director Warren Stewart was explaining all this as I walked in. His pre-concert talks are fairly interesting, from what I’ve heard of them, but their timing is a bit awkward, since I at least don’t like to clomp around looking for a seat while someone is talking and others are trying to listen (though, believe me, this doesn’t seem to bother some other people). I think I have yet to take advantage of the front rows reserved for subscribers, since I’m trying to be non-disruptive (and to find a seat by myself, I will confess). I am deeply grateful, though, that the talks are pre-concert, and not during the concert, when the music should speak for itself.

I’m counting the days until my insurance will cover an eye exam, since I discovered once again that I would not be able to read along in the text. So I have a vague but roughly accurate sense of what the singers were saying, even if I couldn’t map their expressiveness, as it were, from line to line (you read enough Renaissance poetry, you get the hang of it, and Love is a battlefield is not a sentiment unknown to our own troubadors). That’s fine too, I think; sometimes you need to let go of the annotations and let sound give you sense. I'm content to sit there and listen to ninety minutes of Monteverdi's variety.

St Mark’s looked more crowded than it has for the other Magnificat concerts this season, possibly because it was the final concert of their twentieth season (though the program did note that they would revive their production of Orazio Vecchi’s madrigal comedy L’Amfiparnaso on 8 June, as part of the Berkeley early music festival; tickets on sale February 29 at http://www.bfx.berkeley.edu/.) The audience gave them an enthusiastic, prolonged, and affectionate ovation at the end. This was the first season I’ve subscribed; better late than never, I guess, as I’ve enjoyed all three concerts very much. So thanks and appreciation to Warren Stewart and crew: Catherine Webster (soprano), Jennifer Paulio (soprano), Andrew Rader (alto), Paul Elliott (tenor), Daniel Hutchings (tenor), Peter Becker (bass), Rob Diggins (violin), Julianne von Einem (violin), Julie Jeffrey (viol), Elisabeth Reed (viol), John Dornenburg (violone), Nigel North (theorbo and viol), and Jillon Stoppels Dupree (harpsichord), and see you all next year, I hope.

* The link is to Carter's website, but be forewarned that music will start playing whether you want it to or not.
Posted by Patrick J. Vaz at 8:07 PM

You make Carter sound genuinely interesting and no, I've never heard of her either, so thank you.

Magnificat at St. Mark's is definitely not my thing. Glad you enjoyed the subscrip, however. You're every intellectual performing arts organization's dream customer. They should study you, intently.

The Artistic Director of an avant-garde theater here once said to me, "I wish I had an audience full of Patrick Vazes!" I told him that I had often wished the same thing.

That aside . . . yes, definitely check out Regina Carter if you can next time she comes around these parts.