getting the green light

Last night I was at the Yerba Buena Center for the Arts for the second of Ensemble Parallele’s three performances of John Harbison’s The Great Gatsby, as reorchestrated (with the composer's approval) by Jacques Desjardin. Not surprisingly, given Ensemble Parallele’s track record, it was a success both musically and dramatically, much more so, in fact, than the Met production, which I saw in its final 2002 appearance. Harbison was there last night. I had brought a copy of the libretto (which he wrote) from the Met performances and asked him to sign it. “I haven’t seen one of these in years,” he said, looking at the bright red cover. 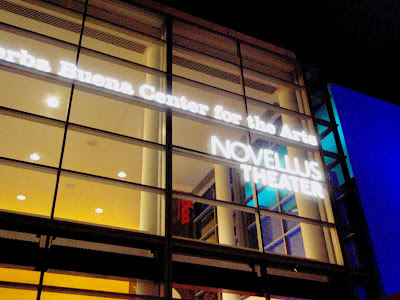 I did like the opera at the Met, but there were some problems, including badly miscast leads: Jerry Hadley was too emotionally open, not opaque enough, for Gatsby, the self-created American who tragically also tries to recreate his past love, Daisy, in his ideal image. And Dawn Upshaw is beloved for her down-to-earth qualities, her intelligence and adventurousness, which are not really qualities that suggest Daisy Buchanan, the golden child of privilege. And both of them were too old. Gatsby the novel is very much the story of people realizing their youth, their idealism and romanticism and hope, are all about to slip away from them. So it’s important for this particular story that the cast look, as last night’s cast did, like people entering their 30s. 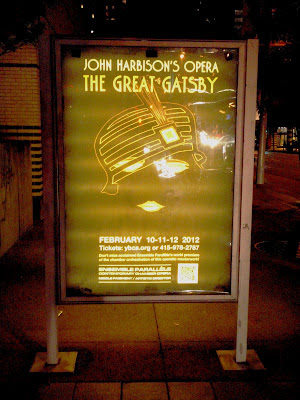 Fidelity to the original source is always a tricky question in any adaptation. An adaptation needs to stand on its own, and fulfill the needs of its own form, but if it strays too far from the source, then why bother with an adaptation at all. In their program notes both Harbison and Brian Staufenbiel, the stage director and production designer, insist, perhaps a bit defensively, that the opera must be seen as separate from the novel. There are a few points in the Gatsby libretto that I think are perhaps a bit more compressed than they would ideally be, sometimes for practical reasons of staging (the scenes with Myrtle in particular), but on the whole I think Harbison’s Gatsby works very well on its own terms while also respecting the iconic novel, considering that seeing confrontations in the flesh is going to be inherently more melodramatic than hearing of them second-hand, framed by a particular point of view.

Tom Buchanan’s eugenics-style concern for the preservation of the white race is here made less specifically racial and more about general opposition to the socially innovative (such as the increasing social freedom of women, particularly his wife). The opera very effectively draws out the parallels between the marriages of Daisy and Tom’s mistress Myrtle Wilson, both of them in varying degrees disappointed in the man they’ve married. I think this adjustment of Tom’s views works very well. For a contemporary audience, the emphasis on eugenics/preservation-of-the-white-race’s-privileges tips the balance too much against Tom, changing him from a standard wealthy reactionary to someone actively evil. Making Tom’s outburst more about maintaining class barriers helps bring that major theme forward. (That leads me to a quibble: when Tom contemptuously allows Gatsby to drive Daisy back to East Egg, the libretto has him say, “He won’t annoy you. He knows his little flirtation is over.” I wish the libretto had retained the novel’s original version, which is “his presumptuous little flirtation” – “presumptuous” is just so perfect and so telling there.) George Wilson is probably the character who differs the most from the novel, though some of that may be the casting of Bojan Knezevic, who is much more physically present than the original's wan dispirited spirit. He clearly feels anger and a need for revenge rather than an overwhelming and irrational grief. It's legitimate and effective. (And Knezevic’s very slight accent also works well, making him, who is the instrument of Tom’s revenge on Gatsby, seem like one of those immigrants Tom is so worried about. It adds another layer.)

Daniel Snyder as Tom has excellent physical presence; he looks like an athlete starting to go to seed, and carries himself with the assurance of the entitled. Marco Panuccio as Gatsby gives a subtle performance, calculatedly open at times, at others closed, glancing at Daisy with a mixture of nerves and blind romantic idealism. He is shorter than the other men, and carries himself slightly hunched over – this too works well. Susannah Biller is just wonderful as Daisy, with a voice as golden as her presence, almost making her the center of the show, from her conventional flirting to her anguish at being torn between Gatsby’s dreams and Tom’s assuring realities. The whole cast is excellent: Julienne Walker as a sporty Jordan Baker, Jason Detwiler as the reticent and observing Nick, and Erin Neff as Myrtle, who makes (as Myrtles must) a lively impression in a couple of brief scenes. With this cast I didn't feel the sense of vocal strain that occasionally showed up in the Met performance (what I mostly remember from that is Lorraine Hunt Lieberson's vital presence as Myrtle and how awkward Hadley sounded every time he said "old sport," though perhaps that was a deliberate choice). 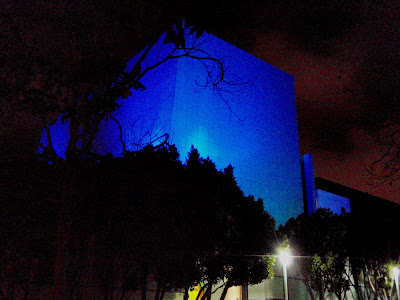 The party scenes and the dancing are fun to watch, just as they were at the Met. Another interesting change from the novel: at Gatsby’s party, when he points out the famous movie star and her director, instead of the vision of romantic glamour we see in the novel, here we see a beautiful woman with a director who is a funny little Chaplin-like man – another indication of the manufactured, dreamed, or willed quality of romance, rather than a vision of the thing itself.

We inevitably lose almost all of Nick Carraway’s first-person narration, his poetic and sometimes perfumed and nostalgic recounting of that summer’s events. Instead we get a complex layering of times and places and musical styles; even with the reduction of the orchestra from 80 to 30, an on-stage band still appears at Gatsby’s parties, and we hear, at the parties or on the radio, pasticcio 1920’s-style songs that sound convincingly authentic (our own cultural expectations of Jazz Age New York are brought to bear on the story, and provide a different source of nostalgia, for a remembered past none of us actually experienced). The songs are fun to hear (and extremely catchy) and also comment, in the style of Pennies from Heaven or Cabaret, on the on-going action. Class and social divisions are so much a part of this story. I think it was brilliant to comment on those divisions by using such contrasting "high" and "low" musical styles. This is, I should say, a very rich and fascinating score, that I think will only deepen the more one hears it. The orchestra(s) under EP Artistic Director NicolePaiement made the music sound as powerful as my memory of the Met’s performance. 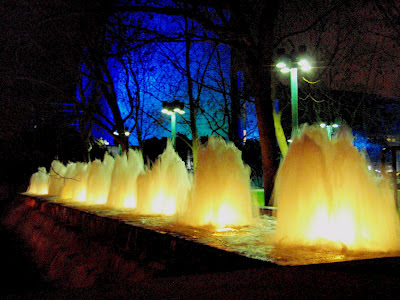 Staufenbiel provided a fast and fluid staging (about half an hour was cut from the opera, with Harbison’s consent), which reflects the layering in the music. Through the clever use of projections, scrims, and a few moveable elements (including Gatsby’s lovely shirts that make Daisy cry, which come down from above, laid out on a rack in rows in a rainbow splendor of pattern and soft color), all the fundamentals of the novel appear: Tom and Daisy’s place, Gatsby’s place, the water in between them, the distant green light at the end of the Buchanan dock, George Wilson’s garage in the Valley of Ashes, the dispassionate stare of the eyes of Dr Eckleburg.

I did find the staging surprisingly awkward in one key moment: after Gatsby is shot, a coffin is wheeled out and the dead Gatsby simply stands up and walks into it – not in a slow stylized way, but more in a “can't figure out what to do here to get the corpose off the stage so just do it quickly” kind of way. Not sure what was going on there.

When the performance at the Met ended, Harbison came out to take a bow and the woman sitting to my left said, in fairly indignant tones, “Who is that? Who is that?” I told her it was the composer, John Harbison. “Oh!” she said, sounding very impressed. It must have been the only time at the Met she had ever seen a living composer. Harbison took a bow last night, too, but everyone seemed to know who he was. 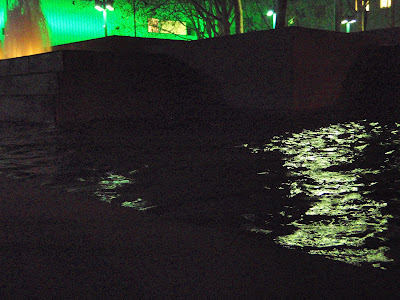 OK, at this point Ensemble Parallele’s annual production is a high point of the year for opera-lovers. So I was glad to hear that next February we are getting Mark Adamo’s Lysistrata, which I am eager to hear.
Posted by Patrick J. Vaz at 6:30 PM