Visible, invisible,
a fluctuating charm
an amber-tinctured amethyst
inhabits it, your arm
approaches and it opens
and it closes; you had meant
to catch it and it quivers;
you abandon your intent.

Moore presents a jelly-fish, in a poem as light and fluctuating as the creature it describes. It appears and disappears (visible, invisible) and that quality calls to mind the otherwise unmentioned water where the jelly-fish is found. The strange creature is a charm – which can mean something that gives delight, a small ornament, something created or containing magic – all apt meanings that undulate through the reader's comprehension. Some solidity is suggested by the comparisons to semi-precious stones (even if the primary meaning is the color of those stones): amber and amethyst. The initial am sounds in amber and amethyst and the t sounds in tinctured and amethyst are very musical, leaping lightly through the words. Tinctured seems paler and less present than tinted would be, something tinged or dissolved in another substance. This delicate jewel is made of the nerves and what passes for the brains of the jelly-fish, inhabiting the "jelly" as if it were a crustacean in its shell (as if the actual animal is the nerves and the brains, not the whole physical element). Your arm approaches – your, because the poet is universalizing her irresistible urge to make contact with something so beautiful and evanescent. This living, separate being quivers at the attempt, which "we" then considerately abandon: intense curiosity is here accompanied by reticence; both the curiosity and the reticence are forms of respect.

This is from The Complete Poems of Marianne Moore; though described on the cover as the Definitive Edition, with the Author's Final Revisions, any aficionado of this poet knows that there is no final, definitive edition of her works, only the fluctuating charms of the revisions she made over the decades; some poems have several versions, each of which has its own claim to some sort of authority. I've recently read Linda Leavell's very fine biography of Moore, Holding On Upside Down, which I recommend; it provides some fascinating new light on Moore's complex family relationships as well as on her work. 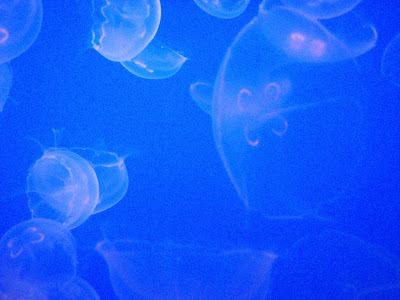 Jellyfish from the Monterey Aquarium, though sadly lacking in amber- or amethyst tinctures.
Posted by Patrick J. Vaz at 5:00 AM