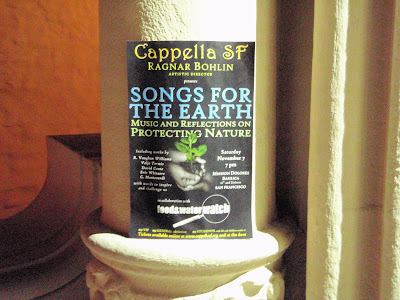 Last Saturday night there were quite a few concerts to choose from – among them Ensemble Intercontemporain at Cal Performances at 8:00, Jennifer Koh and Shai Wosner at San Francisco Performances at 7:30, and Ragnar Bohlin leading Cappella SF at the Mission Dolores Basilica at 7:00 – so I went with the earliest start time and found myself walking around the basilica's block several times, waiting for the doors to open, which they did not do until 6:45. A considerable crowd had gathered in the chilly dark by then, so I waited off to the side until the line was what I considered manageable, with the result that the front part of the church was full by the time I made it in. The usher was having such a wonderful time teasing someone in front of me that he was unable either to hand me a program or even let me pass. I managed to grab a program while he was mid-josh and semi-shove my way through, as politely as I could. Given the late hour at which they opened the doors, I wasn't really up for tomfoolery. I was also in even less of a mood than usual for sitting in a crowd, so I kept moving back as latecomers wandered in (as they continued to do even after the concert started), until finally I found myself almost all the way in the back of the nave, with a safe number of pews between me and anyone else. 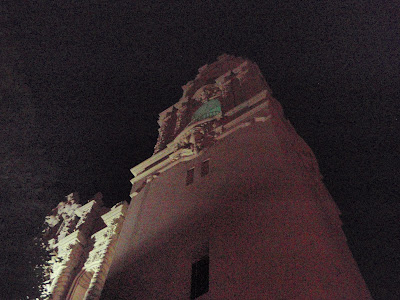 This turned out to be an excellent spot from which to hear the chorus. The last time I heard Cappella SF was also in Mission Dolores Basilica, only I was much closer, off to the side near the transept, and the sound arrived there a bit muddied. From where I sat on Saturday the sound came through in clear and well-shaped form.

The theme of the concert, presented in collaboration with Food & Water Watch, was Songs for the Earth: Music and Reflections on Protecting Nature. It did occur to me fairly late in the game that the "reflections" mentioned in the subtitle would take the form of readings during the performance, and indeed between each number a member of Food & Water Watch would read a brief comment. These were mostly well chosen, though personally I would have preferred more in the way of philosophy and poetry rather than politicians (more Thoreau and Wordsworth, fewer congressional representatives, in other words). I guess the idea was to remind us that political solutions are essential for some of the larger problems, but by concert's end, when I saw several people rudely holding up their glowing phones to get a shaky and inadequate video of the group singing, which reminded me of an article I read recently pointing out that Steve Jobs's major contribution to our world will most likely be piles of toxic waste dumps full of instantly outmoded phones, I wondered how deeply the message of ecological urgency is penetrating to any of us. Given Big Tech's clout around these parts, and the adulation that industry tends to receive, I wonder how many people concerned with things like unfair working conditions, the surveillance state, income disparity, and strip-mining the earth for products we dump after a year would be willing to resist the latest "innovation," or at least hang on to their instantly outmoded phones for a cycle or two. I suppose all of us end up having to deal with our own preferences and ironies when it comes to our individual attempts to solve a massive world-wide problem. 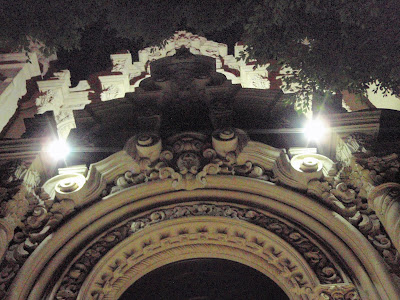 The music itself was more abstract than the readings, tending towards contemplation and celebration of nature and natural cycles. The first piece was by Jan Sandström, a contemporary Swedish composer, who adapted a traditional Sami (Laplander) song to the wind. Tenor soloist Ben Jones sang and the chorus followed, with a drum beating softly with the murmuring sounds. That was followed by the world premiere of Madrigals for the Season by David Conte. There will be a song for each season, but on Saturday we heard two, Summer and Autumn (I couldn't quite tell from the program note if Winter and Spring had been composed yet). Summer was a setting of Dickinson's A Summer's Day and Autumn was John Clare's Autumn (The summer-flower has run to seed). Both settings were very appealing but, especially given the composer's note on his vivid memories of sharply differentiated seasons during his Midwestern childhood, they were a bit too much alike. Dickinson and Clare both write about Nature but don't really sound in the same world. I did feel that the concert as a whole could have used a few more radical contrasts. So the third piece, Monteverdi's setting of Tasso's Ecco mormorar l'onde (Now the waves murmur) offered a welcome tang.

Then we heard Stjernespejl (The star rises on the horizon) by contemporary Danish composer Per Nørgård, followed by Swedish composer David Wikander's Kung Liljekonjalje (King Lily-of-the-Valley), and then Estonian composer Veljo Tormis's Sugismaastikud, a setting of seven short movements presenting autumn vignettes. I assume the welcome programming of unfamiliar Danish and Scandinavian composers reflects the interests of artistic director Bohlin. That was followed by Stanford's The Blue Bird and Vaughn Williams's Three Shakespeare Songs. These were all lovely, contemplative numbers, nicely delineated by the chorus. The final two selections were Frank Tichell's Earth Song, to the composer's own text, based on a heartfelt longing for peace amid our misadventures in Iraq, and Eric Whitacre's Cloudburst, which has the chorus snapping their fingers to recreate the sound of falling rain, a sound we have have sadly lost familiarity with during these drought years. 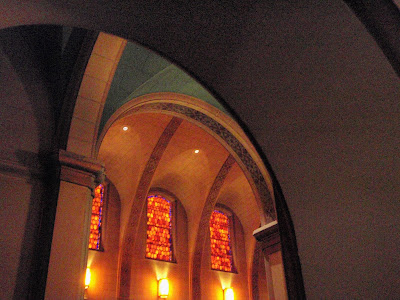 The concert was about ninety minutes with no intermission. The darkened basilica was a nice venue for its contemplative essence, despite the occasional intrusion of glowing screens mentioned earlier. There was a reception afterwards in the parish hall. I slipped in just long enough to grab some cheese-biscuits, say hello to a singer or two that I know, and buy Cappella SF's new Christmas album, Light of Gold, which I may write about if I find the time. Cappella SF's next concert, again at Mission Dolores Basilica, will be a celebration of Russian choral music, on 17 January 2016.
Posted by Patrick J. Vaz at 3:47 PM