Michael Pollan now has twelve tomatoes in various degrees of ripeness. As you can see from the shot below, however, the lower parts of the plant are starting to wither away. This is fairly normal for this time of year, though probably accelerated by the lack of water. I have, without really intending to, cut back watering even further. We did actually get some rain the other day, on one of those oppressively muggy days that are increasingly common out here but still rare enough for us aging folks to say to one another Remember when it wasn't like this? 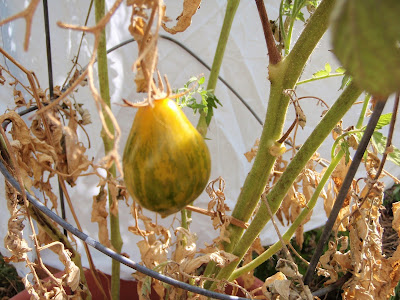 Here's another shot of it. You can tell from the amount of yellow on two of the tomatoes in these pictures that I'll probably be eating them before next week's photos. 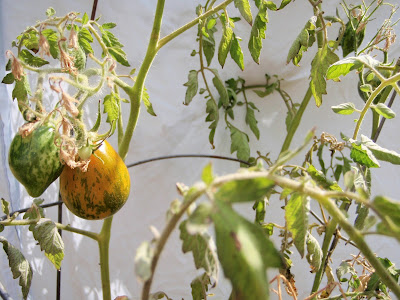 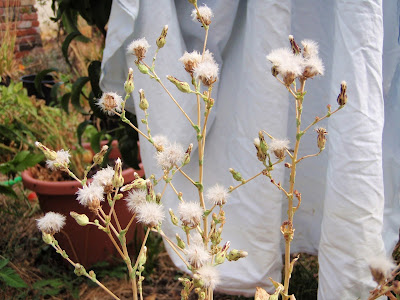 Since I'm revisiting plants I've shown before, here is the lovely Flower Girl. I cut it back quite a bit, and it's still slightly surprising to see, like someone you've always known with long hair who suddenly got it cut really short. You don't really see that effect in the shot below, but you can see how simple and satisfying the individual flowers are, and imagine how wonderful they look massed together in pale pink clouds. You can see by the buds that I'll get at least one more burst before the cooler weather sets in. 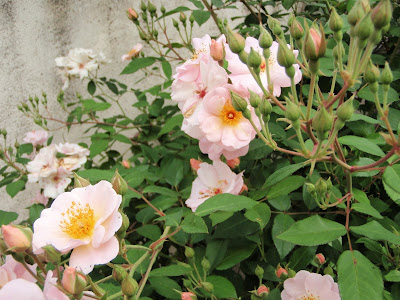 I think I haven't shown this rose before: it's an "old rose," Souvenir de la Malmaison. In previous years it's struggled a bit but it actually seems to be doing a bit better with this year's heat and dryness and neglect. Old Roses can be surprisingly tough. It's about the same shade as Flower Girl, a soft pale pink. There's an old rose with a French name that translates to something like "thigh of a blushing nymph" and I think it might be the same rose as this one, but I'm not sure about that. 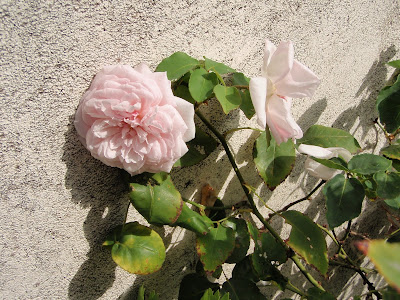 So we come to Cherokee Purple. It now has fourteen tomatoes, all of them in various shades of red except for one stubbornly green fellow. We'll see if he ever catches up. At this time of year, as the sun sets earlier, it takes longer for tomatoes to reach their peak, as they require a certain amount of sun and heat (which is why though I've occasionally had tomatoes ripening as late as November, they never taste quite right, lacking the flavor and depth of the ones that ripened in the long days of summer heat). 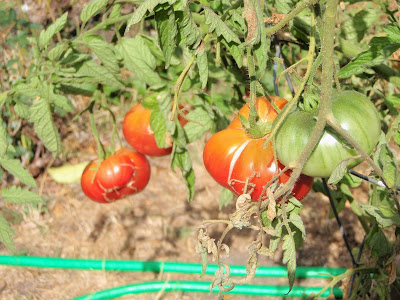 So this week I finally got to eat some tomatoes from Cherokee Purple, and I'll say: this is a very good tomato! Nice texture (meaty, not watery or mealy; I kept thinking of a large and particularly succulent grape), a flavor mild but full with some pine notes, then an afterburst of sweetness, followed by an aftertaste of that classic "tomato" flavor. 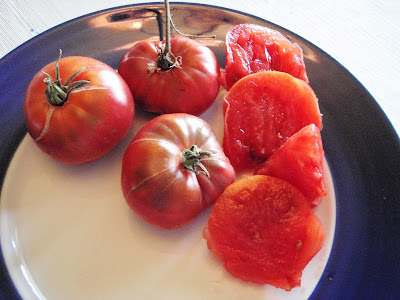 And the figs have started ripening. I've had several. A couple were a bit under-ripe, but at least one was at that delicious state of just-over-ripeness when the fig has the texture of jam and a concentrated sweetness. I like to eat figs with some of the peel still on them, as it has an earthy flavor that can balance some of the sweetness. You eat a fig like that, right off the tree, warm from the sun, and you have a moment of happiness. 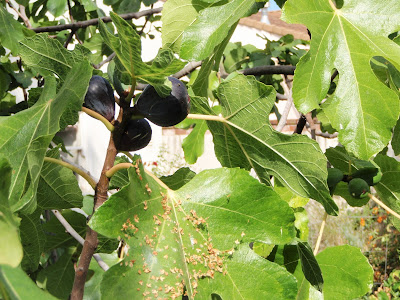 And my beautiful lemon tree just keeps rolling along. 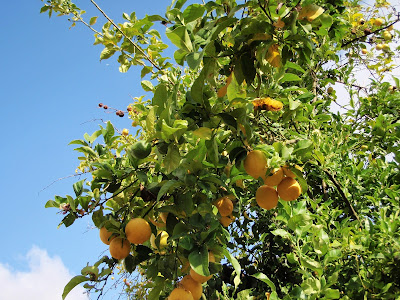