what child is this

It was the 2001 North American premiere of El Nino that brought me back to John Adams. After listening to Nixon in China semi-obsessively for several years, in 1995 I had eagerly bought a ticket for the premiere at Cal Performances of I Was Looking at the Ceiling and Then I Saw the Sky, directed (and I believe conceptualized) by Peter Sellars, whose work I had frequently admired when we were both resident in Boston. I wasn’t familiar with librettist June Jordan but I flipped through a book of her poems beforehand and found no cause for alarm.

I have heard from several sources that Adams considers one’s reaction to I Was Etc. as a litmus test, which strikes me as him being ornery in a New England way, because . . . well, maybe he really does think it’s that good. For me it’s a strong contender for Worst Thing I’ve Ever Seen on Stage. I thought it was fake, smug, hacky, and unconvincing (also, way too long, poorly staged, and over-amplified); I hated it so intensely that I couldn’t listen to anything by Adams for more than a year, even though he was (by far) the least guilty of the three perps. I could probably do a “recovered memory” live blog of the whole thing, if I could stand to hear it again. I have friends who will still edge away from me if the subject comes up.

Anyway, several years later I was leafing through the Symphony’s season brochure and saw that the incomparable Lorraine Hunt Lieberson would be singing. Some time later I realized that two other wonderful singers, Dawn Upshaw and Willard White, would also be singing. Some time after that it dawned on me that this was a premiere by John Adams. I have no idea why I was so slow to take in what it all was. So I went, and it brought me back to his work. I did have some reservations, some of them about the staging, in particular the accompanying cheesy movie by Peter Sellars, which was basically a rip-off of Godard’s Ave Maria. I saw the Sellars movie again recently, since it's incorporated in the El Nino DVD that I watched before I went to last December’s revival at the Symphony. And it irritated me all over again, an irritation that centered on the little metal stud below the lip of the girl playing Mary; what irritated me was that, with the sole exception of that little trendoid touch, she was a completely conventional choice, having exactly the sort of grave and gentle beauty that would lead any self-respecting nun to make her first choice to play the Virgin Mother in the school Christmas pageant. There was no movie at the Symphony this time, and the performance greatly benefited from the more stripped-down staging, though there were some odd and inexplicable touches, like the little Charlie Brown Christmas tree that appeared in the second half.

I also had some reservations about some of the texts used, chiefly the more “political” poems by Hispanic women, in particular the “Memorial de Tlatelolco” by the Mexican poet Rosario Castellanos. It is a long (frankly, too long for its role in this work) account of a police massacre in Mexico City. It’s one of those “remember this outrage” poems, which I personally don’t respond to – I find them too one-dimensional to function effectively as poetry and too restricted in perspective to function effectively as history, or even as narrative. To me they end up being about the poet’s righteousness. I do recognize and am grateful that I am in the privileged position of being able to take a mostly aesthetic view of such poems. But then, most of the audience for El Nino is also in such a position.

And although the poem could be heard as a generic account of violent government oppression that is ignored by official media, you have to get past several factors for it to work that way: there are enough specific details so that you’re aware (even if you haven’t read this in the program book) that it’s referring to a specific incident, one that doesn’t mean much to most of the audience (I’m taking the perspective here that this is a work by an American composer in a largely English-speaking country, to be performed to a largely well-off audience); it’s an incident in a foreign country, one that most of the audience is going to consider permanently troubled anyway; and it’s in the language of that country, Spanish, which most of the symphony audience, I’d guess, doesn’t speak. A poem that’s meant to serve as the centerpiece of the section on suffering and injustice should not be so heavily veiled from the audience; I can’t help feeling that an American composer should have illustrated the themes of injustice and suffering with something that would hit a little closer to home with an American audience – it couldn’t be that difficult to find some examples of American hypocrisy and injustice to take that role, in a language that will reach the audience without translation. I realize the use of these poems is a way of reaching for a more universal and inclusive account, but – though I understand others might take a different perspective – it can seem, politically and aesthetically, a bit trendy and slick. 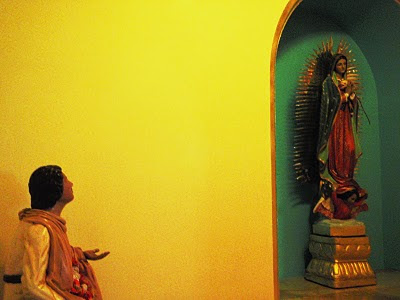 Though I’ve gone on about this, it’s not a major problem (the way I found the texts for Dr Atomic and I Was Etc. to be major problems). Most of the texts are very well chosen and evocative. This is a Messiah for a more secular and culturally diverse time, meaning that the emphasis is on the nativity not as an historical and theological event but rather as a mythic and poetic story (in fact the last word of the whole work is “poesia,” a poem, and it gently ebbs away in the ethereal voices of a girls’ chorus), a tale of birth, suffering, and the acceptance of love despite its difficulties, a tale to be told by alternative voices.
Many of the texts from the Apocrypha have a charming folk-tale quality. I’m always delighted by the little orchestral roar that accompanies the dragons in Pseudo-Matthew’s story of Jesus and the dragons – it’s hard not to picture little toy dragons. There are other baroque-style illustrative touches in the music, as in the upward figures when the three countertenors sing (when Mary visits Elizabeth) “the babe leapt in her womb.” The opening of the work reminded me of the opening of Das Rheingold, as we hear a murmur of indistinct, childlike syllables that gradually form distinct words, beginning with “maiden.” Though there were many moments that brought fleeting reminders of other traditions, the whole work is totally and distinctively Adams. 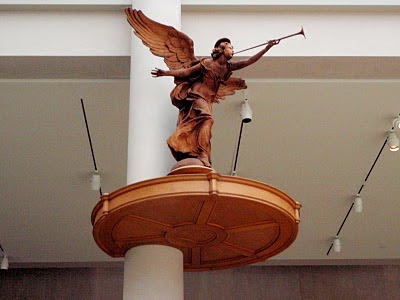 I went to the Friday performance, so I heard Jessica Rivera instead of Upshaw. I thought her lovely and lyrical; I also enjoyed Jonathan Lemalu and the three countertenors, Daniel Bubeck, Brian Cummings, and Steven Rickards, though I found them more effective in unison as the Archangel Gabriel rather than individually as the kings Gaspar, Melchior, and Balthasar. Michelle DeYoung had the difficult task of taking over for Lorraine Hunt Lieberson, a singer I referred to earlier as “incomparable,” and I mean that quite literally: there’s no point in comparing anyone else to her. Hunt Lieberson had an emotional intensity and authenticity that gave her singing a rare spiritual depth. I feel fortunate to have had some experience of her art, but that’s no reason not to enjoy the different quality that DeYoung brought to the part; she had a certain almost operatic grandeur and dignity that brought out the drama in her part.
The Symphony Chorus was wonderful, powerful and tender and expressive throughout their difficult music. I do have to complain about the amplification of the soloists; I assume this is a deliberate aesthetic preference on the composer’s part, but it distances and flattens the sound in a way that to me detracts from the experience of live music – if I wanted to experience the music mediated by a sound system, I’d stay home and listen to the CD (or watch the DVD). Honestly, after hearing the soloists would be amplified I hesitated before buying a ticket; finally I decided that hearing the chorus would be worth trying for a rush ticket. I ended up being so glad I went, despite the amplification. It was wonderful to get another chance to revisit this music in performance. I've been listening to it semi-obsessively ever since the performance.
(The image of votive candles at the top is from St Patrick's Cathedral in New York City; the statues of Juan Diego and the Virgin of Guadalupe are from a chapel in the Basilica near Mission Dolores in San Francisco; and the trumpeting angel astride a pulpit is from the American Wing in the Metropolitan Museum in New York City.)
Posted by Patrick J. Vaz at 9:07 PM