Last night Old First Concerts presented EUOUAE, a new medieval vocal group headed by Steven Sven Olbash. They performed the Messe de Tournai, the oldest surviving polyphonic mass (that was enough to sell me on going, seriously), along with Gregorian chants for the feast of the Assumption of Mary, and closing with a Salve Regina by Jacob Obrecht. The feast of the Assumption is tomorrow, August 15 (incidentally, that’s the date when Lolita finally escapes Humbert Humbert, and I’ve always wondered if Nabokov chose the date deliberately because of the feast, so suitably ironic in several ways). Thanks to Sid Chen for mentioning the performance on Facebook, which is possibly the first time I've ever found Facebook useful for anything.

The mystery remains as to how the name is supposed to be pronounced. I’ll spare you the postgraduate work in medieval musicology, or the trip to Wikipedia, and report that it is the standard medieval shorthand for “saeculorum, amen,” which is part of the phrase meaning “forever and ever, amen” that concludes the doxology that concludes the chants. I thought there might be some standard pronunciation familiar to medievalists, but apparently there isn’t, since Olbash confessed he wasn’t sure how to pronounce it. There’s a higher marketing wisdom here – there’s been a lot of discussion about the name, its source, meaning, and pronunciation, that probably helped spread the word about the concert, since the church was quite full (though I’m not sure how crowded these Friday night concerts usually are). Sure, it’s embarrassing to buy a ticket if you don’t know how to pronounce it, but that’s why there are on-line ticket sales. It is a word (a real word – I’m told you can use it in Scrabble) that telegraphs a sound and style; so it expresses many things that cannot really be expressed without many many other words, which is true actually of so many words, and not just those about music. 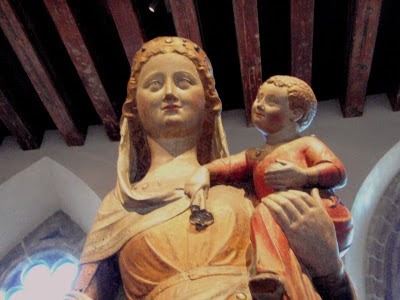 Perhaps they will have to come up with some sort of pronunciation, because I really hope they continue to perform. What a wonderful end to a less than wonderful day. First I’m going to complain, though, because that is what I do. Olbash spoke to the audience at some length twice during the performance, completely breaking the mood. Since there was a Q&A afterwards, I think commentary could have been saved until then. I ended up not staying for that, because of time, which was too bad, because I think he probably had lots of interesting points about how the music was performed. But during the performance you’re really there for why the music is still performed, not how; you're there for the sonic thing in itself. But then I generally see no point in comments from the stage. 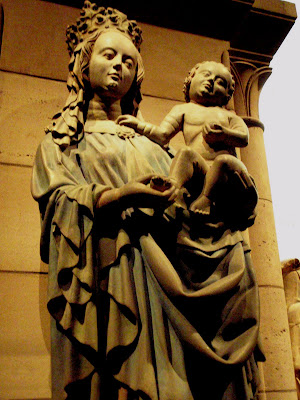 It was a shame to break the mood because medieval music establishes such a strange spell, so evocative of its time and yet so modern-sounding, so timeless in its sense of ethereal eternity. The voices of the group blended very nicely, with enough individual tang so that it didn’t all sound indistinguishably chantish. I’m not really in a position to comment on the musicology involved, but I’ll just note that the interspersed Gregorian chants contrasted nicely with the polyphonic sections of the Mass, and the concluding Salve Regina ended everything on a fantastic note (or notes, I should say).

I wonder how this sounded to medieval ears, who only heard music when someone occasionally made it; coming into the lacy stone of a cathedral under sunlight fragmented and colored by stained-glass windows, or lit only by flickering candles, with the voices blending among the vaults, it all must have seemed heady in a way that it can’t in our amplified overlit world, where instead it sounds oddly serene. The man next to me naturally was playing with his program the entire length of the concert, and I realized he was part of the authenticity of the experience, like some snuffling old monk who resists, through intention or indifference, the sensuous salvation of the human voice.

(The upper photo of the Virgin and Child is from The Cloisters, and the lower is from the Metropolitan Museum of Art.)

I kind of like that there's a mystery that not only the mighty internet can help us solve. I looked at dictionary.com, thinking that its very helpful pronunciation soundbites would help, but no luck. Thanks for the scrabble word, though.
Is there a known year on the Messe de Tournai? I'm just curious about the age of the oldest surviving polyphonic mass and wondering how it managed to survive when others didn't.

The scrabble reference was for you, as you probably guessed. Spring that one on your competitors.

Here's the information on Messe de Tournai from the program: ". . . a 14th century manuscript from Tournai in modern day Belgium contains the first known complete Mass ordinary to have been collected under one cover. The individual movements, which vary not only in notational system but also in compositional style, were likely composed by more than one person. However, the manuscript itself is well-worn, which suggests its having been used in the context of the sacred liturgy."

The Wikipedia entry is here:
http://en.wikipedia.org/wiki/Tournai_Mass

The earliest surviving polyphonic setting of the complete Mass ordinary by a single named composer is Guillaume de Machaut's Messe de Notre Dame, from the late 14th century. The Messe de Tournai predates that, but who knows by exactly how much.

The survival of anything is just chance, even in our media-heavy days (think of all the silent movies that are lost, or ask any record collector about things that somehow were never recorded either officially or unofficially -- I've met people who still weep over Furtwangler's vanished Parsifal).