Some travelers speak scornfully of tourists and their touristy places. I don't. To me it seems fairly arrogant to assume I'm going to grasp the true native essence of a place in a few days. I mean, I'm not sure I do that in places where I've lived for decades.

On the other hand, when I had to transverse Fisherman's Wharf to get to Fort Mason for L'Amico Fritz, I saw the advantage of avoiding the more nakedly awful touristy places. 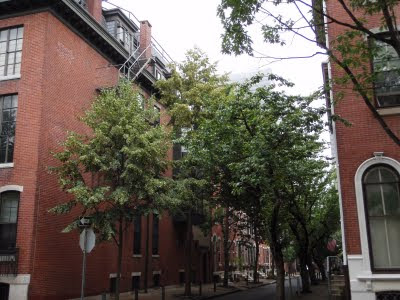 But when I travel I do tend to spend most of my time walking among museums, churches, theaters, and historic sites. Those are tourist places in the sense that people go to cities specifically to see them, and the natives rarely bother, even when that's what the city is famous for. 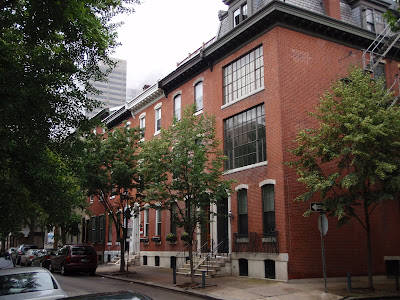 The first two shots here are near Rittenhouse Square in Philadelphia, going away from the Square and towards the science museums. This is a part of Philly that reminds me of Beacon Hill, which is also full of three-story nineteenth-century brick houses on tree-lined streets. I used to live on Beacon Hill, but my horrible little dark apartment next to the burnt-out building was not at all what you might think of if you only knew that I used to live on Beacon Hill.
There was a young teenager playing baseball by himself on this street, and I tried to take a picture of that (a boy playing baseball on those leafy streets just looked so iconically American to me) but when you play baseball by yourself you have to run after the ball yourself, trot back, toss it up in the air, hit it, and then chase after it again, and that takes kind of a long time and I was starting to feel a bit creepy waiting for him to strike the right pose, so I walked on. But that was his life in his hometown. 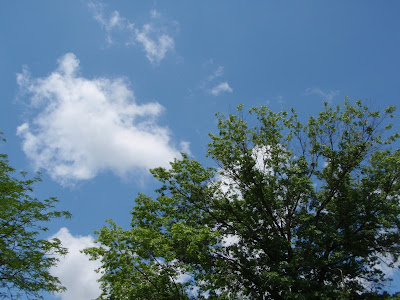 Thanks to my friends Arby and L (with their adorable almost-two-year-old daughter) we spent one of my few sunny afternoons in Philly in another neighborhood I wouldn't normally have seen, though I'm not sure exactly which neighborhood it was. It was a place where the people who live in a city live, and mostly you would have no reason to go there unless you knew them, as we didn't. But we were looking for the Dock Street Brewing Company, and that brought us there. I like beer, but I don't claim Arby's expertise, but I knew I could trust it. 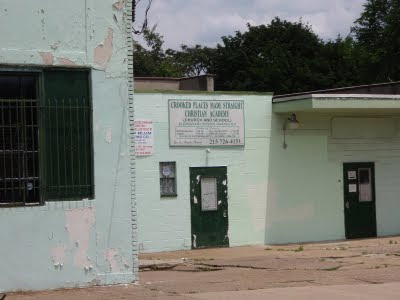 The neighborhood looked a bit dicey to me, but, as I realized when I went to Baltimore several years ago, I, as a native Californian, have trouble reading eastern cities. So much of my state was built up after World War II that when I see solid brownstoned streets I immediately assume I'm in Edith Wharton territory. This isn't always where I am. And I don't have a sense honed from childhood of where exactly I really am, sociologically. This is occasionally a problem. 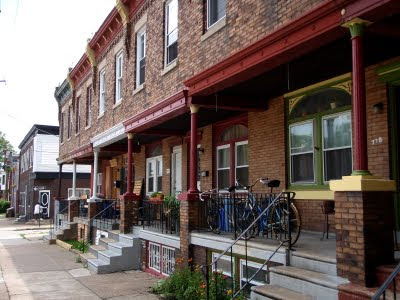 I've known easterners who can barely bring themselves to call Houston a city. I see why, from their point of view, but to me it looks like Mountain View in Silicon Valley, only inflated. When I visited Houston, I had the opera house about ten minutes to the left of my hotel, and the baseball stadium about ten minutes to the right, and in between was a light rail that took me to the Museum of Fine Arts and (after a short walk) the various building of the de Menil collection. So I considered it a fine city, at least for a visit. 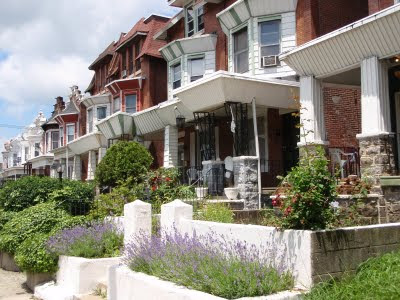 The area around the Dock Street Brewery appeared to be a mixture of lower middle-class black families and young white hipsters, though I have no idea if it's always been like that (whatever always means in American cities) or if it's gentrifying. Once we were out of the car it felt like a much better place to be, which is not always the case. 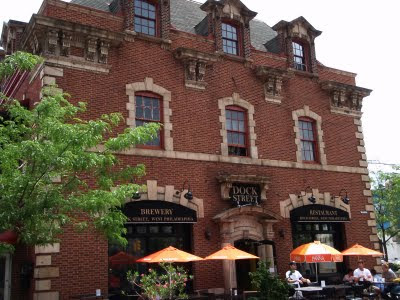 The brewery is in a handsome building, with outdoor seating that was ruined by smokers. 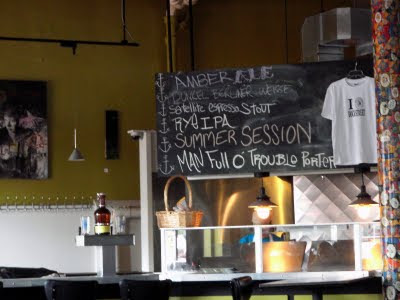 Since I will often order something based on its name, I had Man Full O' Trouble porter, which I recommend, and then later I had a porter (I think it was another porter) that had coffee in it, which is a surprisingly good combination. Beer plus coffee seems to be sort of a thing now, since The Thirsty Bear in San Francisco had the same combo last time I was there. I can't drink coffee normally, but fortunately for me I can take it in beer or ice cream form. 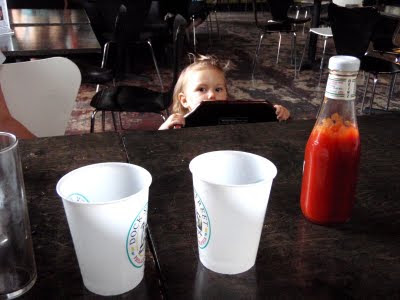 We had pizza with our beers, which was very good, though I forgot to tell them to go light on the cheese. But I've never had a bad meal in a brew pub.

I actually have the same problem reading west coast cities. My only experiences with grinding poverty as a child were on television: tenements and rural poverty. When we lived in Southern California, I remember driving through South Central LA and seeing well manicured front lawns and wondering how that could possibly be a bad neighborhood.
Adorable last picture, by the way.