One of the great American museums is currently right outside Philadelphia, in a suburb called Merion. The Barnes Foundation has always been controversial. Dr Albert C Barnes had a contentious personality, and a number of strongly held opinions, such as beliefs in racial equality and in the value of modern art, that put him at odds with early twentieth-century Philadelphia society. If you have any love for such Impressionist and post-Impressionist painters as Cezanne, Renoir, Rousseau, Matisse, Soutine, Modigliani, and Picasso (among others), you really should be planning a trip to Philly right now. 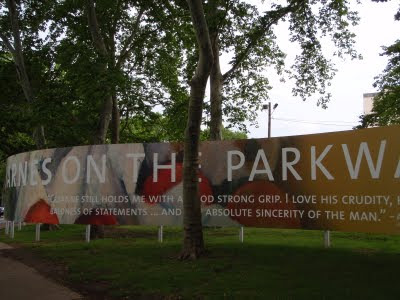 Entire books (some of them for sale in the Barnes gift shop on my recent visit) have been written about Dr Barnes and his personality and his collection and its subsequent adventures in the world (more particularly, in the courts). There currently is a plan afoot to move the collection to the Benjamin Franklin Parkway, not far from the Museum of Art, though it's a little unclear when or even if that's going to happen. 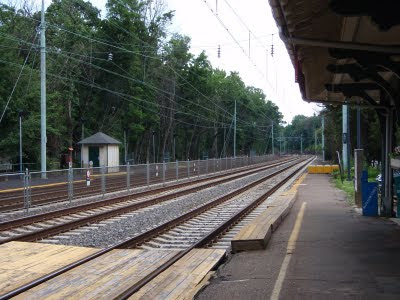 The city powers of Philadelphia obviously would like the move to happen to punch up the tourist trade, but their reasons are not mine and, even if they retain the current arrangement of the art, it will become more like an ordinary museum in a car-choked city and less like the inspiring place it currently is. So by all means try to visit before any move takes place, and take the train there (it's not only much easier than the bus, faster and more pleasant, but by luck I happened onto a "silent" car -- no cellphones, iPods, etc allowed). 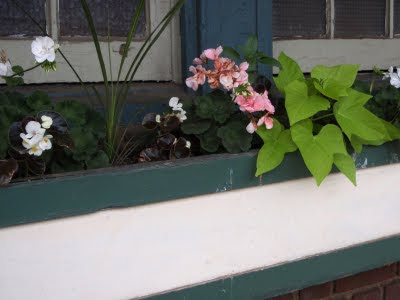 The Foundation is a short and pleasant walk from the train station, through what is obviously a very wealthy town. The residential location and the Foundation's educational activities mean the number of visitors is limited, and you have to get a timed reservation (which is easily available from the Barnes Foundation website). 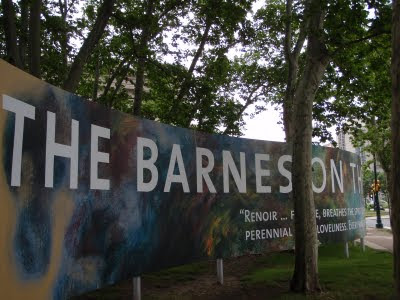 The Benjamin Franklin Parkway has large signs marking the future home of the Barnes, but though Wikipedia gives dates, the Barnes Foundation site itself says nothing definite has been planned. 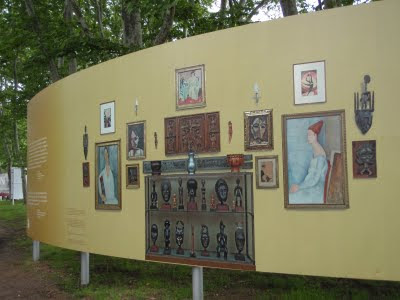 The sign above gives you some notion of how the art is arranged at the Barnes, though it doesn't show you the cars constantly whizzing by on the Parkway, a feature happily absent from the Merion location. Photography is not permitted inside the museum, so this is as close as I can get to showing you how Barnes arranged the works. His will originally forbade color reproduction of the collection or lending the pieces, though a few years ago an exhibit did tour and a splendid color catalogue was issued. But even with these recent changes, the images in the Barnes collection are not nearly as well known as other works by these painters, so when you see them you are usually having your first experience of them, just as their first viewers did, face-to-face and as paintings instead of as smaller, shinier reproductions. 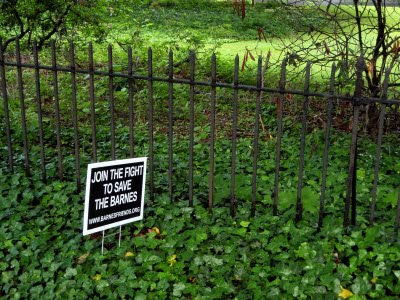 The courts have given permission for the Foundation to be moved, but as you walk down North Latch's Lane you see signs in front of many of the yards suggesting that the residents of Merion have not given up yet. 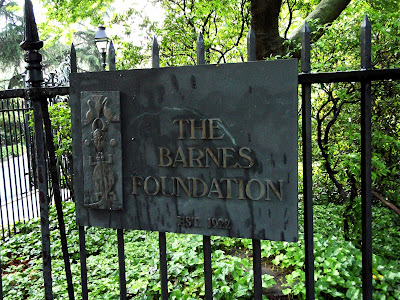 The Barnes, like the Gardner Museum in Boston, the Frick in New York, the Phillips in Washington DC, and the de Menil in Houston, very clearly expresses the wishes and personality of its guiding collector (they all had advisors, but could accept or reject their advice). 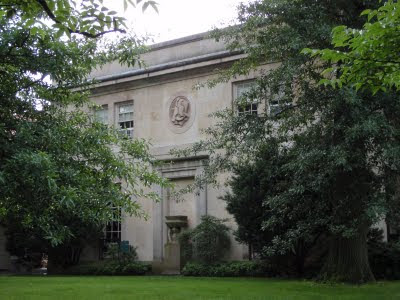 The collection is housed amid the extensive informal gardens that make up the Arboretum, in a two-story building of cream-colored stone, with inset sculptures that I guessed correctly were by Jacques Lipchitz (yeah, I had to mention that I guessed the artist correctly). 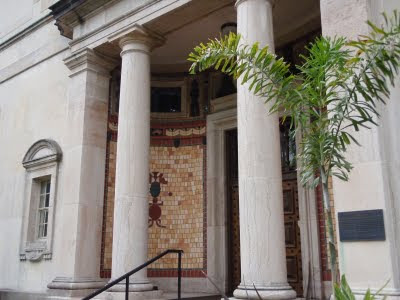 The main entrance is set with ceramic tile, including beautiful reliefs based on some of the African art in the collection. 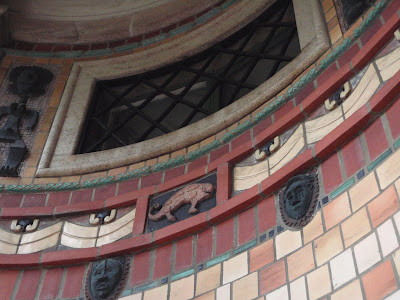 The world has caught up with many of Dr Barnes's beliefs, but I think the remaining aura of cranky bullheadedness around him has subtly affected how people see his legacy. It's easy to dismiss his strictures and his wishes as the perverse eccentricities of a willful rich man, but his whole museum is in reality incredibly well-considered. 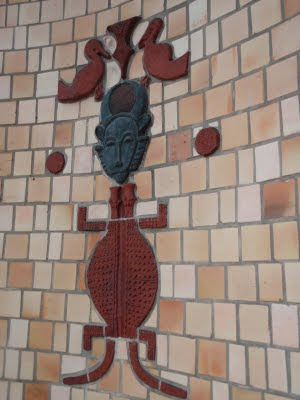 Although the museum can seem a bit intimidating as you approach, off the beaten track and with guards checking your reservation number and time of entrance, on both my visits there the staff has always been very friendly and low-key, and willing to let in those of us who are paranoid about time and consequently showed up a bit too early, without having to wait until the precise moment of the reservation. 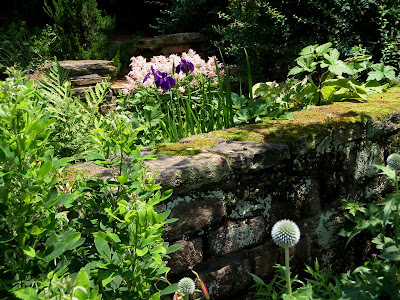 Once you're in, you can spend as much time as you like wandering the collection and the gardens. The first time I visited it was pouring rain, but luckily for me I had a clear sunny day this time. I only wish I hadn't been too late to see the lilac garden in bloom. 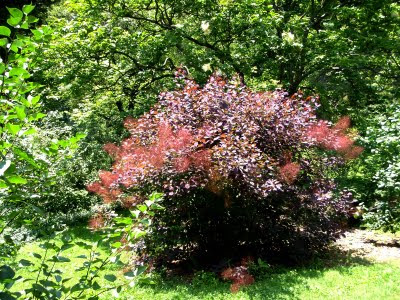 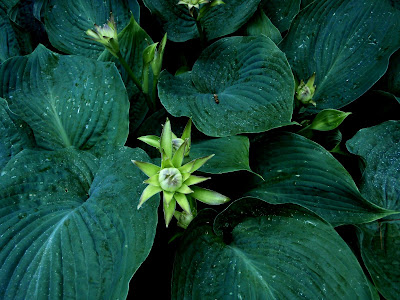 Barnes had very strong opinions on what you should be looking at and for in art, and he arranged the paintings and the African sculptures and the many pieces of ornamental ironwork to make certain points. But it's up to you to draw the connections. For instance, in one room a small Cezanne painting of four people bathing by a river is hung above an early Netherlandish crucifixion (as in the Phillips collection, there are a number of earlier paintings here, often by artists considered precursors to the moderns in some way). And you can notice that in each picture the four figures are in roughly similar locations, and how the composition works around them, and how the nudity (of all four bathers or of the crucified Jesus) affects how you read the picture. Or you can look at just the Cezanne, or just the Crucifixion, or draw other conclusions. It's one of the least coercive museums I've ever been to. This struck me especially because the day before I had been to the Museum of Art's Perelman building, and there was an exhibit of Daido Moriyama's photographs, and one with a sleeping woman's head that mostly took up the bottom half had a label assuring us that the image was "easily read as misogynistic." 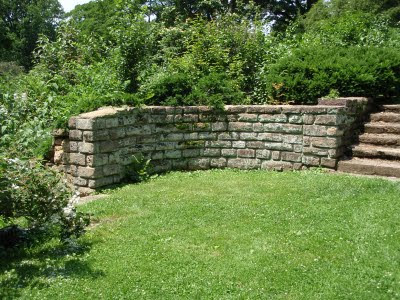 There was no reason to read the picture that way at all; you could actually have seen the woman as dominating the picture, and read that as a sign of her power in a positive way, but that didn't fit in with whatever little theory the curator had. I'm training myself to skim or skip museum labels, but that's not easy for a compulsive reader. 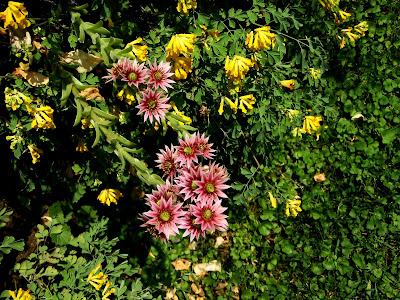 You don't have that problem at the Barnes. The problem is absorbing everything. When you see galleries filled with amazing works you've never seen before, your little mind is apt to be blown. 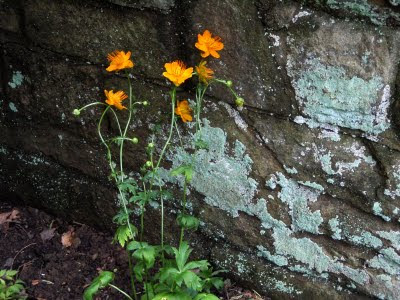 The last time I was in New York I went to the Frick, since I hadn't been there in many years, and though the entire collection is on an extremely consistent and very high level, I realized that there's about half of it that just wasn't my thing (all those marzipan French nudes). The equivalent at the Barnes for me is the massive number of Renoirs. 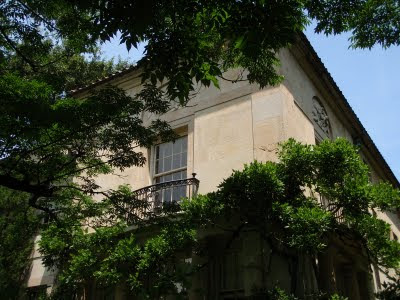 I've always preferred the son's work to the father's. I especially dislike Renoir pere's nudes, though I will say that the Barnes has so many of them that I found a few I did like. Looking at a Renoir nude, with the massive thighs and hips tapering up to tiny breasts and a tinier head, is like seeing the Michelin Man naked. But it wasn't just their size and shape that bothered me, and on this trip I finally managed to figure out just what it was about them. 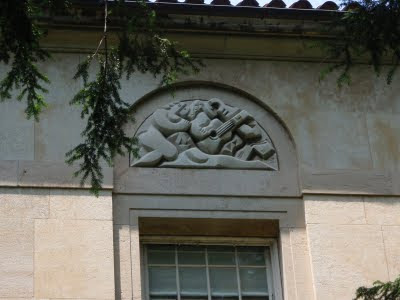 I'm more of a Botticelli man, myself, but that wasn't it, since I can look at the expanse of glistening dimpled flesh in a Rubens and see why that was considered the hottest thing around.
Then I realized why: Renoir's nudes all look incredibly stupid. With the Rubens nudes, the eyes sparkle and you can tell there's something going on up there. Calling a Renoir nude bovine would be a considerable exaggeration of intelligence and vivacity. 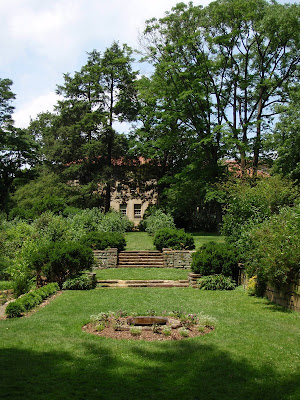 But I had no problem skipping over the many Renoirs and admiring the rest of the collection. There's a really stunning Picasso in rose, white, and gold, The Girl with a Goat, and an epic Dance that Matisse painted for this building, and a wonderful Cezanne of Leda and the Swan, of all unlikely subjects. 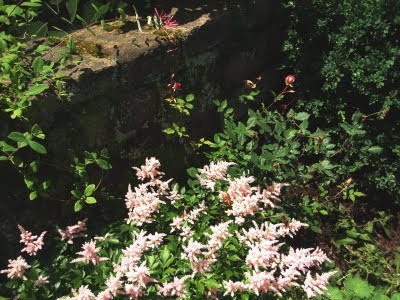 Just go and see them for yourself, and do it while you can still wander in the gardens afterward and even have the occasional room to yourself. The only thing they really need to do is put a cafeteria in the current location -- I will admit that sometimes what really helps you contemplate art is a sandwich. 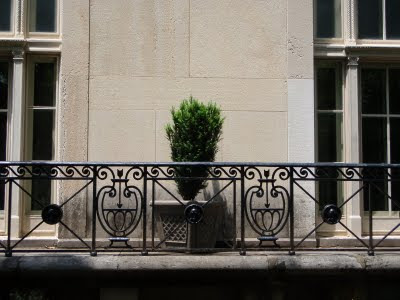 You seriously have me wanting to get on a flight and go see the museum right now.
I love your description of what's wrong with the Renoir nudes, though I don't find them to be Michelin Man-ish. After reading, I went straight to a site that had several of his nudes. The women do look kind of stupid, though you could make an argument that they are just completely at peace. No, even people at peace have something in their eyes. And it might be okay if only one or two of his nudes had those expressions, but they all do, over and over again.
By the way, isn't the Michelin Man already naked? If not, what is he wearing? I'm just putting that out there to show that women can have deep thoughts.

I'm amused (as you no doubt intended) that your illustration of women's deep thoughts is a question about fashion. I think the Michelin Man is wearing tires. Either that or he really needs to hit the gym.

Renoir nudes have always reminded me of the Michelin Man because both have really odd and sort of unnatural body shapes. Renoir's women (they're almost always women) have massive thighs and hips, and disproportionately small heads. Kind of like the Michelin Man. Except he's supposed to be a fun cartoon, not a representation of enticing grace and beauty.

Reproductions don't really convey everything in a painting. I suppose the women are meant to look peaceful or something, but they just look stupid and dead-eyed. And as you point out, they all have exactly the same expression.

You should get on a flight to see this museum (but make a reservation first!). And then you'll see what I'm talking about.

I had a similar experience with Rubens nude lady paintings at the Prado. The paintings are huge and there were endless rooms filled with them. Getting to Bosch and Dutch crucifixion scenes was actually a relief.

So how do you feel about Botero's misshapen bodies?

Isn't it *always* a relief to get to Bosch?

Botero . . . I don't have strong feelings one way or the other. I haven't seen that much of his work in person. He seems to plump figures the way Pontormo or El Greco elongated them, but at least they're proportionate, and he does it to men as well as women. And they don't look as stupid as Renoir's women.