We're threatened with an oncoming heat wave, and I could feel its approach Sunday afternoon when I went out to the backyard to check on the tomatoes. I also intended to fill the birdbath since, as previously noted, I've been convinced I need to provide water to the wandering cats that have displaced the birds. I had no idea that there was a cat in the yard when I went out. He was sleeping under the dappled shade of the fig tree and blended in with the sun and the shade and the half-dead grass. 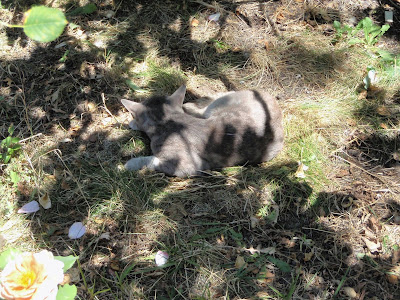 He raised his head slightly as I passed, with a look of irritation that he might have to bolt away from the intruder, because he would clearly rather lie there sleeping. I skirted around him, hoping he would not feel obliged to run, because he seemed so comfortable in the sun. Tired creatures deserve their sleep. He must have decided I was safe enough, because he ignored me. I filled the birdbath and managed to dowse myself with water, so I went inside to change my shirt and that was the cat's cue to jump up and lap away before retreating again. 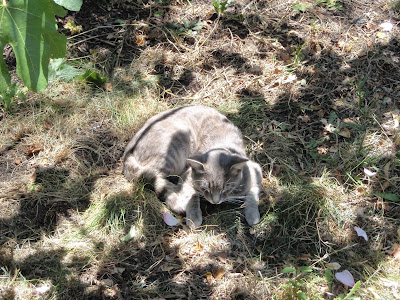 I can't blame him for wanting to sleep under the spreading canopy of the fig tree. 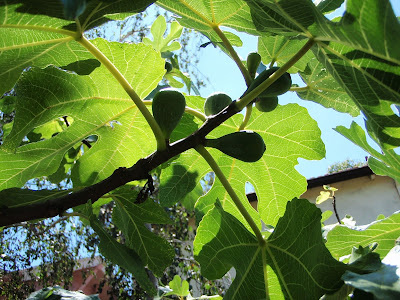 I used to get two crops a year from the fig tree, one around June and one around October. Then, nine years ago this August (I remember the year because this happened about a week before I left for Bayreuth), the tree cracked in half. I guess one side was overloaded and I should have trimmed it back, but still, perhaps because it was a fig tree, the incident seemed absolutely Biblical: The Lord God has smitten my fig tree! Since then, I've only had one crop each year, in the fall. The tree is now full of green figs, and some of them are starting to blush purple towards ripeness, though they are smaller than in previous years. I'm sure this is an effect of the drought; last year, the figs were also smaller, though intensely sweet. And the roses all have smaller flowers this year. 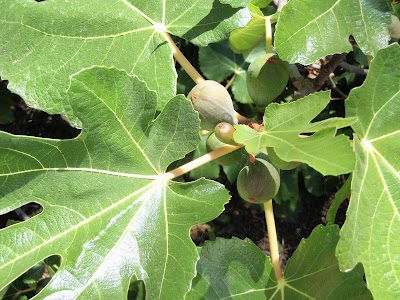 Remember the heirloom lettuce from several posts ago? It's gone to seed, and it's lovely, with tall spires of dusky green and lilac. The photo below is looking down on them; the one below that gives you a better idea of what the stalks look like. 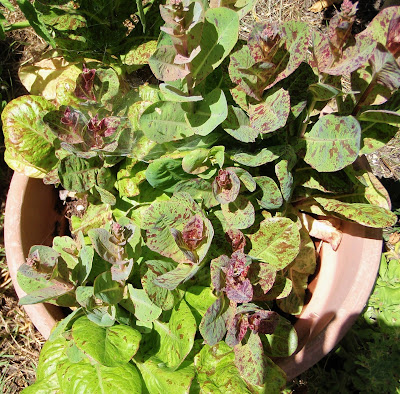 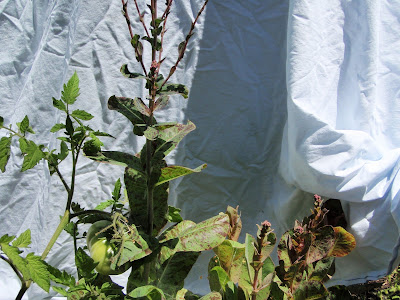 OK, here are the stars of our show. Once again, Michael Pollan is on the left and Cherokee Purple on the right. Both are looking rather extravagantly lacy these days, though I noticed with mild alarm that the lower leaves of Michael Pollan are starting to turn yellow and curl inward. I'm not sure if this is normal or a death-spiral caused by lack of water. Both plants are a bit under four feet tall, measuring from their soil line in the pot. 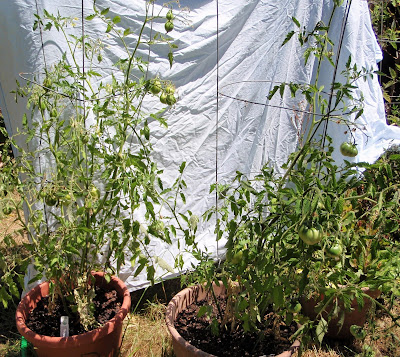 Here are some of the fruits of Michael Pollan. There are currently 18 on the vines, in various stages of ripeness. This is apparently one of those tomatoes that is green and yellow when it is ripe, so I need to start keeping a sharp eye on it. Red tomatoes have more of a screaming ripeness about them. 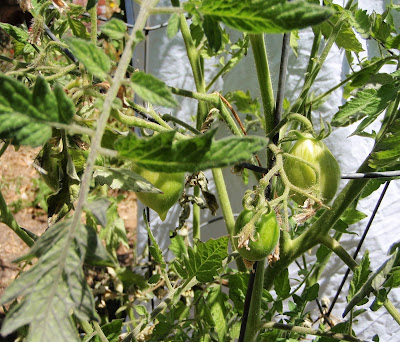 Cherokee Purple now has 16 fruits, in various stages of development. Below is a photo of the first to appear; it is now four inches across, and as you can see its unripe green is just starting to give way to riper hues. 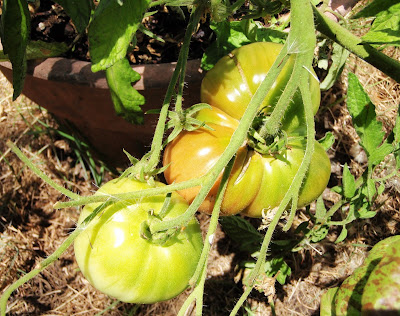 The passion flower in the back has been spreading itself all over the surrounding trees. It's one of those plants, beloved of haphazard, time-pressed gardeners like me, that thrives on neglect. It also seems to be very drought-friendly. 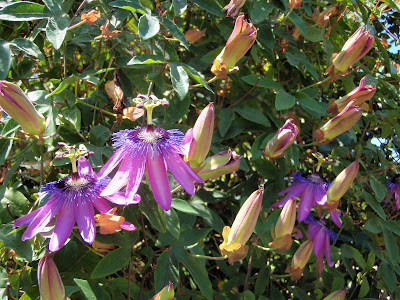 And here's a random rose: this is Our Lady of Guadalupe. I posted it a few weeks ago, but those flowers went the way of all flowers and it's now on its second blooming. Most of my roses, except for some of the antique varieties, go through two or three cycles of bloom each summer. 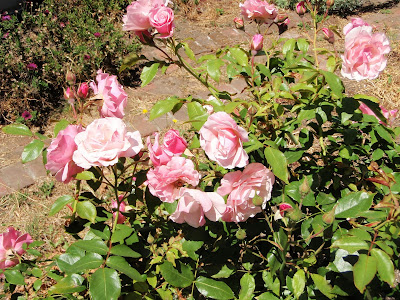 Thank you for watering that gorgeous cat.