It's not quite the dead of summer yet. The days are hot and oddly muggy. My water bill came this week and though my daily usage is much reduced from the 2013 number given as a comparison, it's still higher than it's supposed to be. This is too bad as I am starting to think I need to water the tomatoes more than a couple of times a week. They've been looking a bit wilty lately. I suppose I could try watering roughly every other day for a few weeks. I still pass green lawns and sprinklers that end up watering the sidewalk, so either word is not getting out about the seriousness of the drought or people are just ignoring it. Possibly they're counting on the reports that this coming winter will be an El Niño year, bringing with it extra rain (though it will take more than one rainy winter to make up the water deficit and to counteract the warmer temperatures). I guarantee that maybe the first rainy weekend will get a pass, since that will count for ecological awareness, but the second one will get plenty of whiny complaints from people – from some people.

Once again Michael Pollan is on the left and Cherokee Purple is on the right. The former is now about 44 inches high and the latter about 43. I took this pictures Sunday around noon; it was muggy and overcast. I had intended to get out into the garden earlier than that, but I slept so oddly and poorly the night before – I fell asleep around 8:30 PM, woke up about two hours later, and then could not sleep again until after 4:00 AM, and then got out of bed at 7:30 AM, since I could tell sleep was not going to return to me – that it took me a while to acclimate myself to the day. 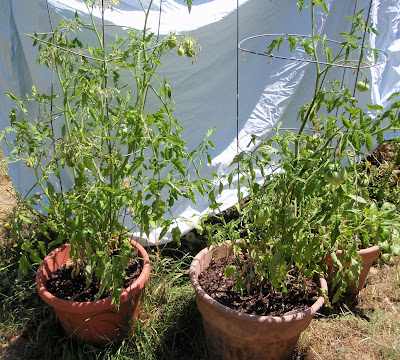 Here is a closer view of some of Michael Pollan's flowers and fruits. Last week there was a similar close-up of this cluster, and the flowers were still bright and yellow and full; this week they are shriveling and starting to turn into fruit. Currently on the whole plant there are twelve tomatoes in various stages of development, though none of them seem to be anywhere near ripe. I seem to have inadvertently picked the two slowest vines in this year's bunch. Maybe that's the garden equivalent of always getting into the line that is going to move the slowest. 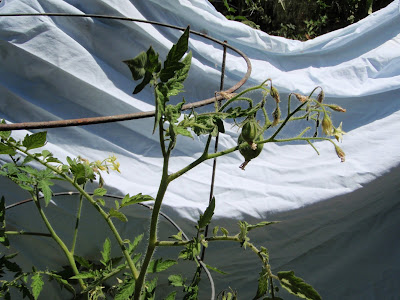 A closer view of some of the Michael Pollan tomatoes. I like the streaked shades of green. I should reread the description on the label, which I always stick in the pot, to see what the ripe fruit is supposed to look like. There are some tomatoes that are green when ripe (usually they are streaked with yellow and the green is paler on the ripe fruits – Green Zebra is like that). 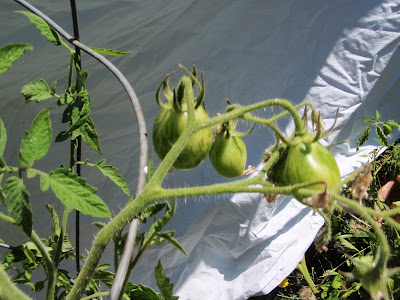 And here's a view of some flowers turning into fruits on Cherokee Purple. 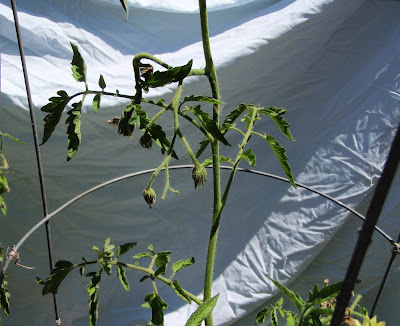 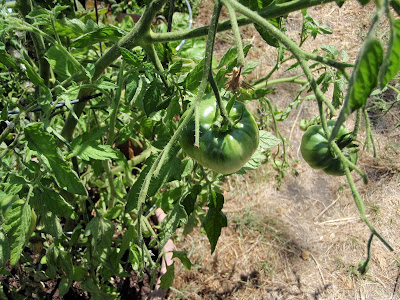 Below are the first tomatoes to develop on Cherokee Purple. The larger one (on the top) is still about three and a half inches wide. I wonder if its proximity to the other fruit is hindering its development, though I guess it could always expand in the other direction, or the vine could just curl differently. 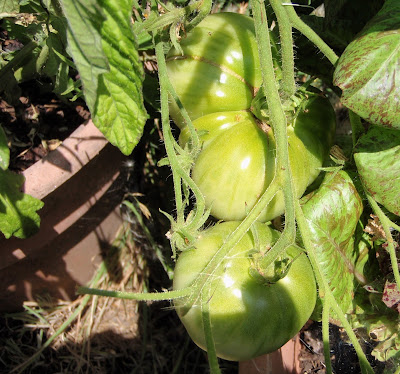 The vines do tend to go straying, despite the tomato cages. Below is a wanderer from Cherokee Purple. It has a couple of small tomatoes on it, which might be difficult to see against the pale brown background of dead grass, though you can always click on the picture to enlarge it. When the tomatoes get larger and heavier they will pull their vine down to earth. Though this increases the chances that the tomatoes will get damaged (whether by bugs crawling around or by my careless footsteps), I usually don't try to tuck the vines back into the cage when they've reached this point. When I do so they often flop out again, or they snap and there go the tomatoes.

Speaking of bugs crawling by, I weeded around the pots this week (even with reduced watering, it seeps out and so the area surrounding the pots is now the only place where things are green) and discovered more ant colonies. They were already swarming through the compost bin and various other plants like the artichokes and indeed through my kitchen – my very limited counter space is currently reduced even further because of the ants and the ant traps. I've read some E O Wilson and know I should admire this industrious creatures, such marvels of social organization and labor – they're like little miniature versions of Fritz Lang's Metropolis, right in my own backyard, and in my own house! – but despite my life of many dull routines and my regular contributions to a corporate-sponsored 401(k) plan, I am by nature more of a grasshopper person and in that great divide I come down on the side of the heedless summer fiddler. I used to hear crickets every summer when I was young but I rarely hear them now. I haven't heard any so far this year. 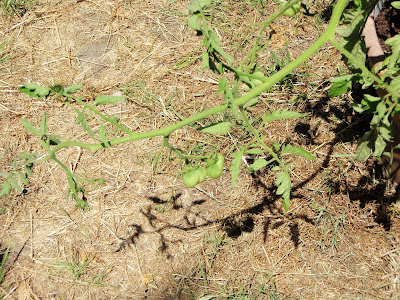 Below is Indigo Kumquat, which I mentioned last week. These have ripened enough so that you can't really see the green, so you're not quite getting the beautiful combination of the black-purple on top of the yellow-green. (When they're ripe the yellow-green is replaced with a pale orange). I find these so beautiful I think I will look for them next year as well. With their combination of two deep, lovely colors one on top of the other they're like little ripening Rothkos. 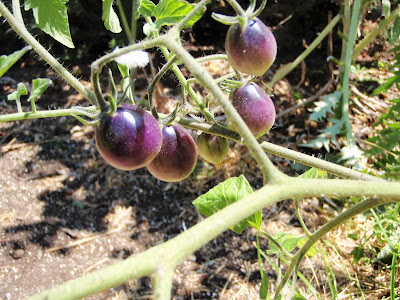 Below is an heirloom pepper I'm growing this year. I bought it because it was named Hot Portugal, which amused me (my surname is Portuguese). You don't quite get the scale here; the plant is about eight inches high, but it looks smaller because it's in a section of the yard that gets a lot of wind (it's been much windier the past few years) so it bends over and looks several inches shorter than it would be if it were upright. The vivid red peppers are about two to three inches each. They hang there like jewels. I should pick some and figure out what to do with them. 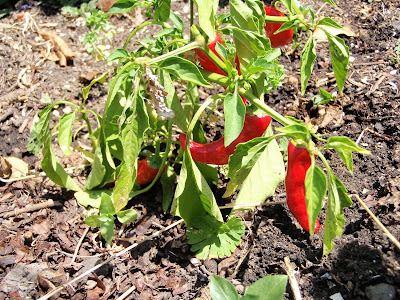