After last week's update, in which I discussed the local feral cats who were so thirsty they tolerated my presence in order to jump into the birdbath and lap up the water, I was persuaded to think of it as my St Francis duty to keep these creatures hydrated, no matter how often they darted for the fence as soon as I appeared. I was happy enough to be so persuaded, but it does concern me that I no longer see any birds using the birdbath, and it was a bit of a relief Monday evening when I spotted a young mourning dove hopping along the brick pathway.

In addition to the two beautifully patterned grey cats from last week, I saw one Sunday morning that was all charcoal grey, with short hair and a sleek figure (probably, as with a supermodel, due to hunger as much as genetics). He was silhouetted on top if the wall. He was elegant and regal, like a cat come to life from an ancient Egyptian tomb painting. He was gone by the time I could grab my camera, but I think he returned that afternoon to snarl and tussle with one of the patterned greys. I suddenly feared that my attempt to provide water may be turning into a turf war over scarce resources – Mad Max among the tomatoes and roses. I've also seen a black cat slipping around, and Sunday evening I looked up from the kitchen sink and out onto the driveway and saw an orange tabby sitting on its haunches, giving me a baleful glare. Who knows where this will end!

In previous weeks I've shown one of the lavender bushes and the Flower Girl rose, so here, curling in front of them, is an olive-silvery branch of wormwood, which is very decorative as well as one of the key ingredients in absinthe. I'm always kind of amused by the high price of absinthe, now that it's legal again, since the reason it was so popular with all those painters and poets is that they were poor and it was a cheap way to get high. It tastes kind of like licorice. 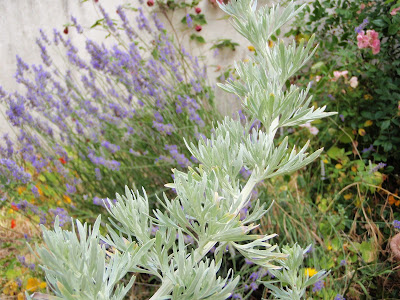 Although I've made more of an effort to eat things I grow before they pass their prime, I did miss some artichokes, which you can see below. It's a decorative plant, sort of similar in color to wormwood, and the chokes flower into purple thistles. It can get quite tall. The one shown below is taller than I am, which puts it well over six feet. It is one of those plants that really attract ants, so the artichokes I harvested were rinsed off outside (with a bucket beneath the tap to collect the water) and rushed into an already steaming pot. Ants are pretty tough, but not tough enough to survive forty minutes of steaming. (I'm told that soaking the artichokes in salt water will also eliminate the ants, but I don't know how long you're supposed to soak them.) Ants are all over outside, and inside too, and they climb on me as indifferently as if I were a counter or a plant. The creepy thing about them is that once you've felt them you can continue to feel them even after you've brushed them off (or crushed them to death), which brings us to the interesting word formication, meaning a sensation like insects crawling over (or under) the skin. 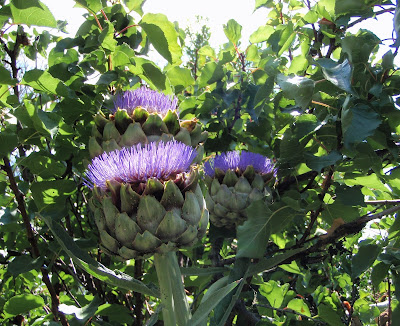 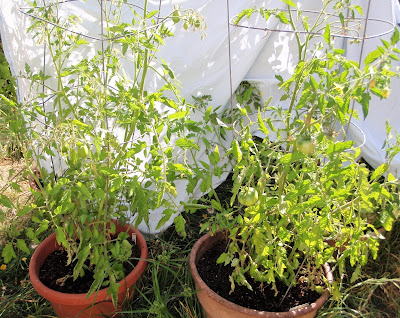 Below are some flowers on Michael Pollan, which still has seven fruits. 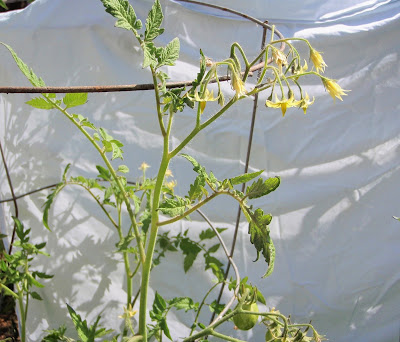 This is one of the larger Michael Pollan fruits; it's about one and three-quarters inches long, kind of flat and oval and streaked in shades of green. 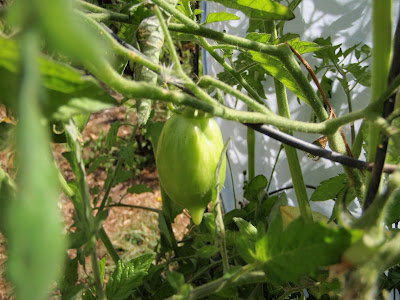 Here are several of them! 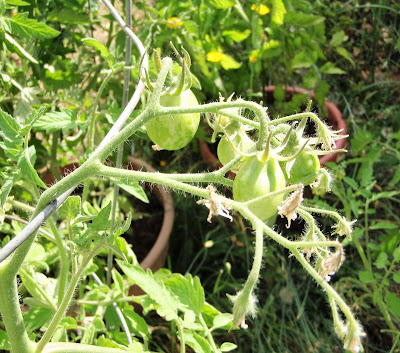 Below are some Cherokee Purple flowers. There are about five fruits on the plant. 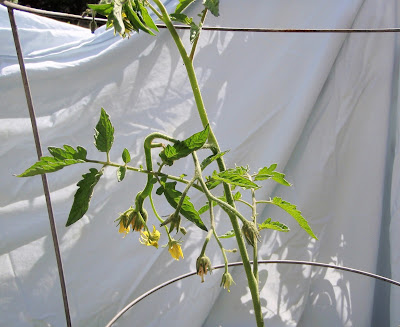 Below are the Cherokee Purples I've been showing the past few weeks. The larger one, on the top, is now about three and a half inches long, up from three and a quarter last week. 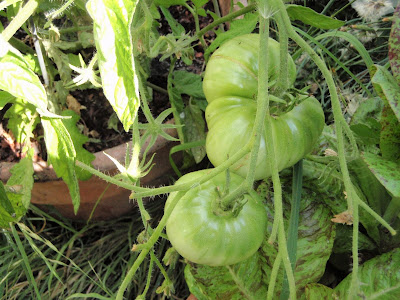 Meanwhile, my other tomatoes, as if to rebuke me for not featuring them, are already producing. Last week was V's birthday so I brought her the first fruits of the field. You can see them below. The large one on the top left streaked yellow and green is Green Zebra, which I've grown before. Last year's were particularly good. They have a slightly tart taste that is pleasing. At the bottom of the plate is a variety new to me, Indigo Kumquat, which is quite beautiful as well as tasty. The ripe ones, as you can see, are purple shading into orange, and when they're unripe they're blackish purple and green. I'll try to get some good pictures of those for next week. 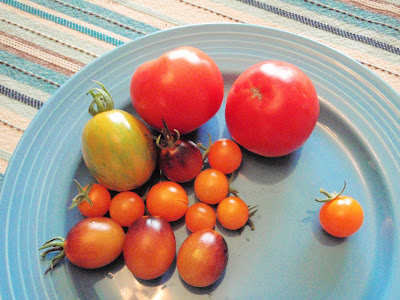 Thank you for all the birthday treats, including the beautiful and delicious tomatoes.
The first thing that struck me about the word "formication," is that formic acid is the stuff that ants release to communicate with each other, so I had to look up the origin, and it indeed is named for ants.
It's great to be able to scroll back to the start of your tomato plant experiment. How they've changed! They grow up so fast.
V

Thanks and you're welcome! By the way, there is a "tomatoes" tag, so you can click on that and see just those entries.