Nothing overtly dramatic, like a rainy night, happened this week. The usual early morning fog has been burning off fairly early. This is good for the tomatoes, if not for me. Due to the rain last week I've watered the tomatoes even less this week. It doesn't seem to be harming them or even slowing them down, which is making me think about how to water tomatoes in the future, assuming this drought ever ends (meteorologists are predicting an El Niño year, which should mean adequate rain, but there's quite a deficit to make up, and we still need to see if the predictions come true). Since I plant most of my tomatoes in pots I've always assumed they need more water, but perhaps enough gets retained in the pot to provide healthy tomatoes. I guess we'll see what the fruit is like when it appears. Certainly the only green spots in the back are circling the tomato pots, so there is water running out through the drainage holes. 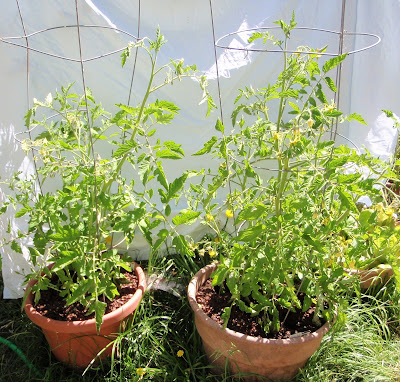 Paul Robeson, the tomato behind Michael Pollan, is actually taller than either, and just as bushy as Cherokee Purple. Yes, I often buy plants based on their names. Or not: several years ago I saw a beautiful pink rose, and that's not my favorite rose color to start with so it had to be extra lovely to catch my eye, and I was going to get it until I realized it was named Sexy Rexy. Uh, no. It must be a fairly old rose, too – I mean, not an official old rose, but dating from decades back when Rex "Sexy Rexy" Harrison was a star. And still sexy. Just couldn't do it, based on the name. On the other hand, Betty Boop is a fantastic rose, and even looks good once the flowers have blown. I'd put up some photos but it's not doing too well this year.

Below you can see the shadow of Paul Robeson behind the pale blue sheet. 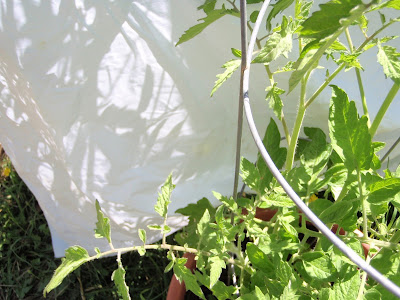 Below is one branch of Michael Pollan. You can see the blooms. Last week there were about 46 (I'm combining blossoms and buds this week); this week there are about 50. The clusters of blossoms are spread around a bit more than before, but one stem with about six blooms on it has snapped. Not sure what brought on the breakage. I have not had problems with birds or suchlike eating my tomatoes (the birds head for the apricot and fig trees), but they do like to land on the tomato cages. And there are several cats that like to prowl around my yard, and squirrels that like to bury nuts in the pots, though come to think of it I haven't seen any squirrels this year, which is odd.

I had some Silas Marner-type thoughts about bonding with some of the cats, and a few times I left out bowls of milk for them, which something drank. But they all still bolt when they see me, though you'd think they'd be used to me by now. They're quite agile at jumping up on the walls. 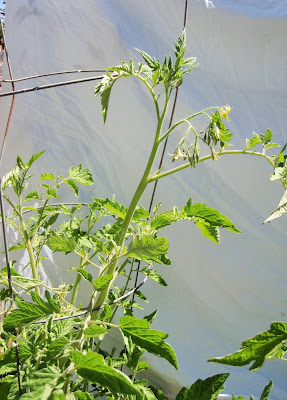 Below is the Cherokee Purple solo shot. There were about 111 blossoms on it, up from about 60 last week. 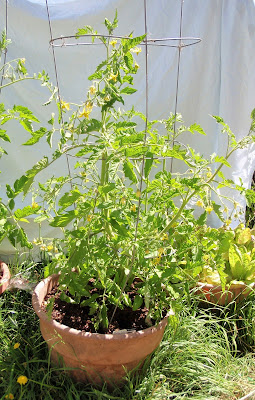 Apricots are starting to drop from the tree, but they're not actually ripe enough to eat yet. Frustrating! 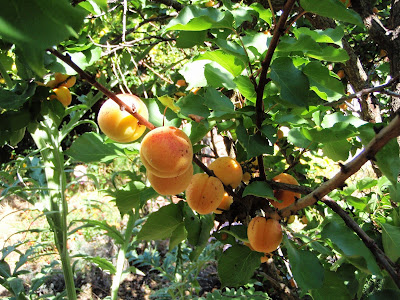 Below is a bonus shot of the passion flower vine – part of it, anyway. It seems to have recovered quite well from the cutting-back I had to give it a few years ago, when I realized it was doing what vines do and starting to choke everything in its path. But it does it so beautifully! 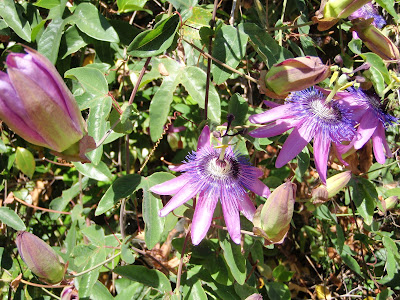 You're going to have to start calling this series "Mostly Tomato Tuesday," rather like the Mostly Mozart Festival, because you are literally branching out. And yes, I'd love some of those apricots if you have any extras after fruition.