I Sit Carefree in My Drifting Boat

I sit carefree in my drifting boat,
a line cast into the green waters.
In the evening sun I delight in the rain
that patters on the bank of the clear river.
Let me get a willow branch
and skewer the fish I've landed.
We'll head for the wine shop in the village.

Cho Hon, translated from the Korean by Jaihiun Kim

I've never been fishing, which may be why I find it such a soothing and fulfilling activity; no doubt its present-day reality would rapidly disillusion me. This poem by a sixteenth-century Korean official, soldier, and poet shows fishing's appeal: what a pleasing pastoral interlude! The fisherman is carefree, his boat is drifting in the green waters (green is the only color mentioned here, and it spreads its calming sense of a generously healthy natural world through the whole poem). We can infer that the fisherman has some other occupation in life that makes this day on the river a relief for him: if he were dependent for his livelihood on what he catches, he probably wouldn't be letting his boat drift, nor would he feel so carefree. He might reflect on his hard luck when the rain starts to fall, instead of delighting in its gentle pattering on the banks of the river. The mention of the willow branch helps fill out our mental image of the scene (I wonder if the weeping willow as an image of sorrowful love, frequent in the English poetic tradition, also exists in the Korean? if so, perhaps – especially since it skewers the recently killed fish – it acts here as a reminder of the underlying sorrows of life, from which this day on the river is a momentary escape).

Fish are a frequent subject in Asian art for a number of reasons besides their natural appeal: the Chinese word for abundance is similar to the word for fish, so they suggest prosperity; they are also symbols of fertility, perhaps because of their numerous fry, or because some species travel in schools. Due to their scales, whiskers, and life in the water, some fish are associated with the powerful Dragon (which, in Chinese culture, is associated with good fortune and water, unlike the European dragon, often associated with evil and fire). And there is a famous Taoist text in which Zhuangzi and Huizi debate whether fish are happy and whether we can know it (for one version of this exchange, see here, and also click through to the interpretation, and see here for another interpretation, as well as more information on Zhuangzi). Although most of these fish connotations spring from Chinese culture, and this poem is Korean, they were spread to other Asian countries through literature, painting, and religion, so I think it's fair to see this poem in the context of these rich and multiple possibilities. On the surface the poem conjures up a pleasant idyll in the country, but given the connotations of the fish – its suggestions of bounteous Nature, of continued vitality, and of philosophical inquiry – we can see deeper implications: a suggestion of the restorative powers of contemplating Nature in solitude. (Yet there's no suggestion of loneliness; the day ends with a promise of conviviality, as the fisherman heads out of the gentle rain and for the village wine shop to share his catch). 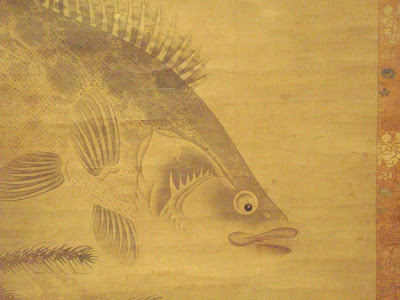 Since I'm talking about my Platonic idea of fishing, let me recommend Izaak Walton's famous fishing manual, The Compleat Angler, which I read recently. It's as refreshing as a vacation by a lake, which is especially nice for me because I can't afford actual travel. Walton was born in England in 1594, a couple of years after Cho Hun was killed in battle on the other side of the world. Walton himself lived through the Puritan Revolution and the execution of King Charles I (a royalist, Walton found it prudent to retreat to the country). So both men lived in troubled, war-torn times, and found refreshment and meaning in fishing. Walton's book is a wonderful compendium of very specific information on how to catch different varieties of fish, what the fish are like, and how to cook them. He was an early father of Nature writing, recording the specific rhythms of Nature in his locale, with as keen an observant eye for weather and rivers and plants as for fish; and he interlards his text with poems and religious and philosophical thoughts. He has the appreciative but unsentimental view of animals common to people who live in the country, and death takes its place as part of the natural cycle. Here's a sample paragraph:


The gudgeon is reputed a fish of excellent taste, and to be very wholesome: he is of a fine shape, of a silver colour, and beautified with black spots both on his body and tail. He breeds two or three times in the year, and always in summer. He is commended for a fish of excellent nourishment: the Germans call him groundling, by reason of his feeding on the ground; and he there feasts himself in sharp streams, and on the gravel. He and the barbel both feed so, and do not hunt for flies at any time, as most other fishes do: he is a most excellent fish to enter a young angler, being easy to be taken with a small red worm, on or near to the ground. He is one of those leather-mouthed fish that has his teeth in his throat, and will hardly be lost off from the hook if he be once strucken. They be usually scattered up and down every river in the shallows, in the heat of summer; but in autumn, when the weeds begin to grow sour and rot, and the weather colder, then they gather together, and get into the deep parts of the water, and are to be fished for there, with your hook always touching the ground, if you fish for him with a float, or with a cork; but many will fish for the gudgeon by hand, with a running line upon the ground, without a cork, as a trout is fished for; and it is an excellent way, if you have a gentle rod and as gentle a hand.


Walton combines very specific instructions (use a small red worm, on or near the ground) with acute observations of the fish's behavior (when the weather grows colder, they gather together and move into the deeper parts of the water) and physique (he's a leather-mouthed fish, with his teeth in his throat), along with an aesthetic appreciation of its appearance (beautified with black spots on both body and tail) and evocative descriptions of the natural world (the weeds beginning to grow sour and rot as winter comes). There's also the rhythm of the prose, which works its magic; when I first read this passage, I kept reading the perfect ending over and over: and it is an excellent way, if you have a gentle rod and as gentle a hand. 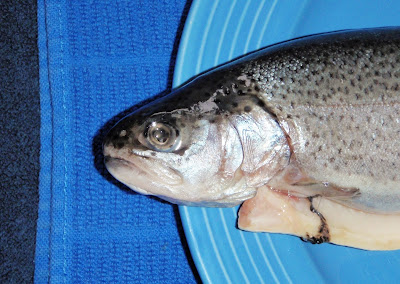 If you find that passage as satisfying as I do, you will probably want to read the whole book. I have a beautiful Folio Society edition with the Arthur Rackham illustrations (you can't go wrong with Arthur Rackham illustrations), but I bought it quite a few years ago and it seems to be unavailable now, so I'd head for the Oxford World's Classics edition. Cho Hon's poem comes from The Art of Angling: Poems About Fishing, edited by Henry Hughes, one of the many excellent anthologies in the Everyman's Library Pocket Poets series. The first photograph is a detail of Fish and Waterweed, painted by Lai'an in ink on a paper scroll in late thirteenth-century China, now in the Asian Art Museum in San Francisco. The second photograph is of a dead trout from Costco.
Posted by Patrick J. Vaz at 5:00 AM

That final image of the dead trout from Costco is very disturbing in the context of all the preceding aestheticizing of fish and nature and angling, and I assume this was your intention. Well done.

I think you may be overanalyzing the lovely Korean poem, by the way. I read it as a honed, poetic description of a perfect day, with natural delights, food, and drink meshing into one. Who needs more meaning than that?

Well, fishing is ultimately about killing an animal for sustenance, so it's not all gently splashing raindrops and restorative contemplation.

Your reading of the Korean poem is fine by me, and is pretty much what I covered in the first paragraph (not so much the food and drink part, which only comes at the end, and then by implication). So you may not feel the need for more meaning, but as another poet said in another context, "Reason not the need. . ."

Fish and fishing carry symbolic weight, often spiritual, in many cultures -- in addition to the Asian cultures I mentioned, think of the symbolism of Jonah and the whale (seen as a giant fish) or Leviathan in the Hebrew scriptures, or the fish as a symbol of Christianity, or Jesus calling the apostles to be "fishers of men," and we can add Moby Dick to the list, Melville proclaiming that the white whale is a fish. So there's a widespread pattern of seeing fish and the activity of catching them as philosophically suggestive in a way that, say, slaughtering a chicken is not. (In fact, The Compleat Angler starts with the Fisherman convincing a hunter to give up his sport and learn the superior art involved in fishing.)

I think these things give an added resonance to the poem, but they're not really necessary for deriving pleasure from it, and if you get nothing from them, then ignore them and enjoy the green waters of the clear river. The poem is sufficient in itself.