At last we've had some hot and sunny days – and that introductory at last tells you how dedicated I am to my tomatoes, because this is not my preferred weather; my inevitable thought on these days is at least it's good for the tomatoes. I refrained from watering today, since I watered yesterday and, you know, the drought. Perhaps the reduced water will help them; one of my vivid memories of the drought during the 1970s is how abundant, striking, and luscious the flowers were. I thought this odd though visually appealing. Eventually, when I met V and the subject came up, she scientifically explained that the reason for the extravagant efflorescence was exactly because of the drought: the plants were, in fact, slowly dying of thirst, and that led them to burst forth blossoming in a desperate attempt to continue their line. (Their flowers are their sex organs: just a reminder.) Those gardens were Tennessee Williams dramas in miniature. It was a lesson with many possible applications.

You may notice that tomato cages have been added this week. I should probably have put them in sooner. I'm a bit mixed about them anyway. Generally they help keep the plants from sprawling all over, but there is some sprawl anyway, and I often find myself tucking tendrils under the wires, sometimes breaking a branch in the process. The smell of tomato leaf that lingers on my hands is a powerful memory-scent for me, bringing me back to my childhood backyard, but I'd just as soon avoid the inevitable Proustian reveries and not break the branches, particularly if they're starting to bear fruit. Lifting up the fruits (when they appear) does protect them to some extent from snails and slugs, though I wonder how active such creatures will be in this dryness. 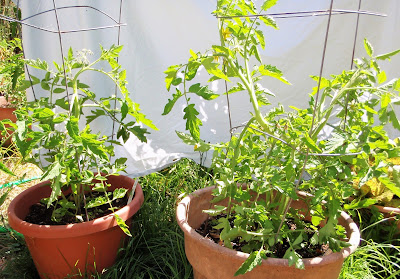 Below is a close-up of Michael Pollan. No actual blossoms yet, but the number of buds is increasing. 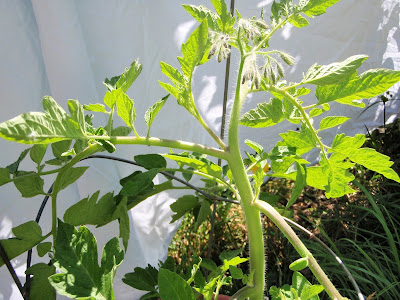 And below is Cherokee Purple. There are at least nine blossoms now, with sudden bursts of little buds spreading over the plant. Serious tomato season is starting. 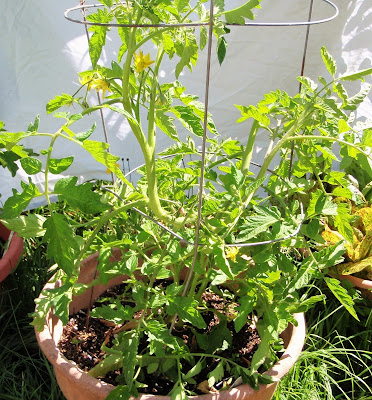