Ensemble Parallele presents a new chamber-opera orchestration by Jacques Desjardin of John Harbison's The Great Gatsby. If you follow the local opera scene or have seen other shows by Ensemble Parallele you already know that this is 10-12 February and that you need to see it, so let me just mention here once again that I saw this opera at the Met, and I'm sure we all wish that was the last time you're going to hear about that from me. . . .

Cutting Ball Theater presents Tontlawald, a multi-disciplinary retelling of an Estonian fairy tale, with text by Eugenie Chan and movement by Laura Arrington, co-directed by Paige Rogers and Annie Paladino; 17 February to 11 March.

The Sanford Dole Ensemble presents an "All New, All Local" program at the SF Conservatory of Music on 4 February, featuring The Nine Muses (David Conte, with text by John Sterling Walker), The Changing Light (Peter Scott Lewis, setting three poems by Lawrence Ferlinghetti), Waiting... (Michael Kaulkin, setting poetry by Elisabeth Eliassen) and Gertrude and Alice (Sanford Dole, songs from a work in progress about the lives of Gertrude Stein and Alice B. Toklas with text by Brad Erickson). Nice to see that the Summer of Stein lives on!

Earplay presents an evening of new chamber music; the oldest piece is by Morton Feldman (Nature Pieces from 1951; each Earplay concert this season is anchored by a Feldman piece) and the rest are all 21st century pieces by Alex Hills, Mauricio Rodriguez, Wayne Peterson, and Chen Yi. That's 6 February, with a start time of 7:30 (thank you).

Riccardo Muti and the Chicago Symphony appear at Davies Hall as part of the American Orchestras series presented as part of the San Francisco Symphony Centennial Season. On 14 February the program is Pacific 231 (Honegger), Alternative Energy (Mason Bates, a CSO commission), and Franck's Symphony in D minor; and on 15 February the program is the Entr'acte No. 3 from Rosamunde (Schubert), Night Ferry (Anna Clyne, a CSO commission), and then back to Schubert for the Symphony in C major (the one they call The Great).

The San Francisco Ballet has two mixed programs: 14-25 February is Program 2, featuring Chroma (Wayne McGregor to music by Joby Talbot and Jack White III), Number Nine (Christopher Wheeldon, to music by Michael Torke), and Beaux, a world premiere by Mark Morris (no music is listed on the Ballet's website). 16-26 February is Program 3, featuring Le Carnaval des Animaux (Alexei Ratmansky to Camille Saint-Saens), Trio (Helgi Tomasson to Tchaikovsky), and Francesca da Rimini, a world premiere by Yuri Possokhov (no music listed for this one either).

San Francisco Performances celebrates the 30th anniversary of the Alexander String Quartet with a 4 February concert featuring works by Debussy and Hahn, along with Camille Claudel: Into the Fire, a world premiere by Jake Heggie featuring Joyce DiDonato. They also have Leif Ove Andsnes on 9 February, playing works by Haydn, Bartok, Debussy, and Chopin; and jazz violinist Regina Carter on 18 February.

Cal Performances has so many varied offerings this month that I'm just going to be lazy and suggest looking at the whole month for items of interest. I am eyeing a few, but am waiting to see how schedules and budgets work out. But I did go ahead and buy my ticket for next October's Einstein on the Beach.

You have until 12 February to catch the sublime masters of the Venetian Renaissance show on loan from Vienna at the DeYoung Museum. And you have until 19 February to see Bernini's Medusa at the Legion of Honor. But starting on 18 February at the Legion you can immerse yourself in the Aesthetic Movement with The Cult of Beauty: The Victorian Avant-Garde, 1860-1900. That exhibit runs until 17 June, but why would you wait until then? 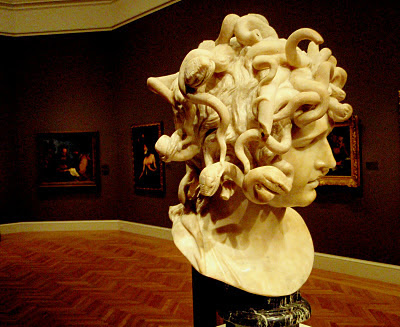