The San Francisco Opera season is well underway, but the one genuinely exciting, do-not-miss production is coming up in a few weeks: Karita Mattila in The Makropulos Case. As for the rest of the season, it doesn’t exactly heat the blood. For a while I thought Gockley’s aim was to turn the local house into the Met Lite, but at this point I’m thinking we should be so lucky, given the Met’s more adventurous repertory and staging in the last few years. We’re eating their dust out here in the West, not that I think the majority of the local audience minds. They seem quite in tune with Gockley’s advocacy of – well, let’s try for something neutral between “beloved classics” and “exhausted warhorses” – the more familiar works in the repertory, sung by already well-established names.

Anyone in search of anything more adventurous or challenging than People You’ve Heard Of, In Works You’ve Already Heard (or even those just searching for novelty) is out of luck. Gockley and the bulk of the San Francisco audience seem perfectly suited to each other. That’s not a compliment. Any potential audience members intrigued by works like Le Grand Macabre or St Francois are once again left to fend for themselves out there in the avant-garde wilds. Thank goodness for DVDs! What we're getting here are brand-name works presented in a more or less plush and traditional way. Nothing here is going to frighten the horses. Going to the opera in San Francisco now isn’t like going to the Museum of Modern Art; it’s like going to Bloomingdale’s. 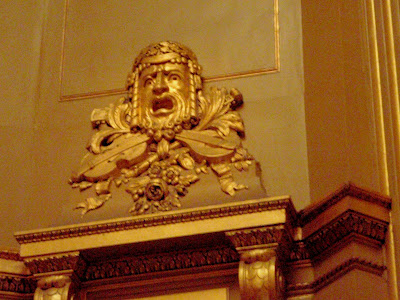 By the way, I don’t really buy the claims that what San Francisco Opera is currently doing is “all about the voice”; everyone says that these days casting the big Verdi, Puccini, and Wagner works is difficult to impossible, whereas we’re living in a golden age for Handel and Rossini singing. So are we getting Radamisto or La Donna del Lago? We are not. We’re getting inadequate productions of the big Verdi, Puccini, and Wagner works, because a large segment of the audience isn’t interested in anything unfamiliar and no one is interested in convincing them that new stuff can be fun and engaging.

Yes, Aida and Madama Butterfly are great works, and there’s no disgrace in presenting them, but for a veteran of the opera house there isn’t a lot of urgency in hearing them; that’s the thing about Top 40 programming – sooner or later, and probably sooner, you’re going to get another chance to hear that piece. Yet opera is a strange and addictive drug: a few months ago I looked up the performance dates of Aida for a friend, and suddenly was strangely excited at the thought of hearing the opera – Aida, of all things, an opera that has never interested me much outside of Leontyne Price’s involvement with it.

I ended up feeling I didn’t really need to pay those prices for another Aida, though Zajick was definitely a temptation. It turns out to be just as well, since I could have written the reviews without seeing it: the Zandra Rhodes designs were eye-catching but didn’t always work well, and the cast was vocally uneven. (I had seen Zandra Rhodes’s production of the Pearl Fishers and though I loved the colors I thought the setting was too cartoony.) Sung drama is the most basic form of drama, and an art form that has survived in varying forms for centuries deserves an audience that thinks of it as something more than candy-colored camp.


As for the rest of the season, I enjoyed Werther; and though Nozze di Figaro is one of my favorite operas, I loathe this production, which I’ve already seen in two different revivals (my mostly negative thoughts on that 2006 revival are here, and it was actually less vulgar than the first); I love Madama Butterfly, but feel I’ve seen it enough for a while. I did spring for a ticket to Cyrano, because I’ve always admired Domingo and the only other time I’ve heard him live was in Herodiade. And then there’s the Janacek; I assume we have Mattila’s star power to thank for bringing us one of this great composer’s fascinating works. I honestly don’t understand why he isn’t as popular as Puccini – to me he has that same kind of emotional directness and melodic richness. And Jenufa has one of the few happy endings I find convincing, even inspiring. So that’s the one can’t-miss for me this season. 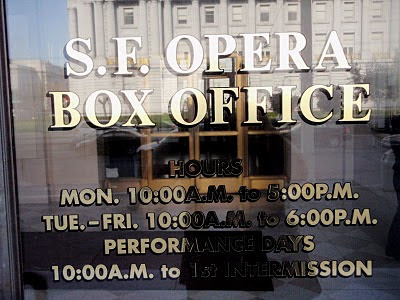 I’m not excluding the upcoming June Ring Cycle from that assessment, either; I hoped that Walkure last June would guide and convince me one way or the other, but apparently I got the vocal off-night, which seems to be how these things go for me (so if I end up not buying tickets, you can be assured you’re in for a treat!). The production itself is not very interesting (my thoughts on Walkure are here, and in there is a link to my thoughts on the Rheingold, which I saw in both DC and here).
Fortunately other local groups are taking up the operatic slack for those who maybe don’t want to pay hundreds of dollars for their hundredth Butterfly:
On October 30 and 31, Urban Opera is presenting a Purcell pasticcio, the Witch of Endor. They’re a new group and though I missed their previous presentation, Dido and Aeneas, it was highly praised.
Cal Performances is presenting Lorin Maazel's Castleton Festival Opera in two Britten works, The Rape of Lucretia on March 24 and 25 and Albert Herring on March 26 and 27.
Ensemble Parallele is presenting Philip Glass’s Orphee, one of his Cocteau operas, on February 26 and 27, as a follow-up to their kick-ass Wozzeck.
Berkeley West Edge Opera is in a nifty new space in El Cerrito and has some interesting programs, starting with Handel’s Xerxes on November 13, 19, and 21, followed by an adaptation of Carmen called the Carmen Fixation and a new opera by Clark Suprynowicz and Amanda Moody called Caliban’s Dreams.
Festival Opera hasn’t announced its 2011 productions as far as I know. For a while they were doing one warhorse and one more unusual work (like Rorem’s Our Town or Britten’s Midsummer Night’s Dream) but lately it’s been two warhorses. I hope they resume their more adventurous ways. But even if they don’t, they present solid productions in a nice smaller theater, at a much lower cost than San Francisco Opera.
The other big opera excitement for me is the James Levine 40th anniversary CD and DVD sets. Cumulatively the sets are expensive, though the per-disc price is quite low. (And by not buying tickets to Aida, Butterfly, and Figaro, I more than covered the expense.) And click on those links and look at what you get! What I really love and admire here is the commitment to new or “difficult” works (there was a time when Mozart and Wagner were considered difficult. . . ). Two recordings each of Wozzeck and Lulu, Lorraine Hunt Lieberson in Les Troyens and The Great Gatsby. . . everyone will have his or her particular jewels here, but anyone who doesn't find this collection thrilling . . . uh, is probably a big fan of the current programming at San Francisco Opera. I haven’t watched any of the DVDs yet, and have only listened to about half of the CDs, but I’m thrilled with the set and can’t recommend it too highly. My one complaint so far: the packaging is flimsy and difficult to use. I almost wrecked the DVD box trying to get the tray of discs out, and removing the CDs means reaching into the cardboard envelope and sliding them out by touching the disc – so a fail on the packaging, but the recordings are sheer gold.
Posted by Patrick J. Vaz at 9:21 PM